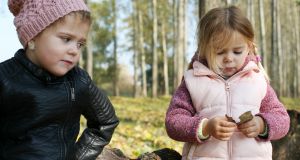 Sibling rows and disputes are among the most common childhood problems that parents worry about. Photograph: iStock 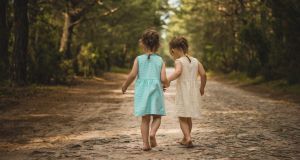 Handled well, their differences could be a source of connection between them as they grew up together. Photograph: iStock

I have two girls who were born within only 14 months apart. They are now five and six years old. The trouble is that there can be lots rows and fights between them. The youngest one in particular tends to dominate the older one. She has a fiery personality and tends to get her own way, whereas her elder sister is quieter and more reserved. They will be having a row about a toy or something and the eldest girl gives up and lets her sister get away with it – she goes off and sulks and the youngest gets the toy or wins what they were fighting about. I worry for my older girl, that she is not assertive and that she is going to get into a habit of losing out all the time. I often get involved and insist they share sometimes, but this only works to a degree. When I watch them by themselves it seems to be that the younger is always winning. I don’t think this is good. What would you advise?

Sibling rows and disputes are among the most common childhood problems that parents worry about. As in your case, many parents worry about an imbalance of power getting established, with one child being lower down in the pecking order and always losing out.

In my experience, taking the side of one child in a dispute can be problematic as a parent. Usually this leads to the other child feeling unfairly treated and that you favour the child you are defending. This is especially the case if you react angrily or if you are critical of the “dominant child” who can then feel that you “love” the other child more.

This can lead to resentment and worsen the children’s relationship with each other rather than improve it.

As a result, the goal in sibling rivalry and disputes is to help them sort out their problems themselves. Rather than taking “sides” when you intervene, you make sure to be be impartial and take “both their sides” as you encourage them to get on better.

Thoughtful response When witnessing a dispute, make sure to resist reacting and instead take a pause, so you can thoughtfully respond.

For example, if your older daughter backs off and lets her sister win, your first response might be to check in with how she is feeling about what just happened. You might say “I see you let J have the dolly . . . is that okay?” You might acknowledge her feelings if she is sulking or looks sad – “you don’t seem happy . . . would you like to to have kept the dolly?” Then you can discuss what she wants to do about what happened – “shall we talk to your sister about sharing?”

And if she wants this you can go back to her sister and guide the two of them in problem solving.

Problem solve Take time to guide your children in problem solving. This essentially means that you give them space to share their feelings and to discover possible solutions themselves. For example, in the above example you might start a conversation with the girls together

– “we have one dolly and two girls who want to play with it – what can we do?” Then you listen to their feelings and thoughts.

You can praise them for all their good suggestions such as taking turns, sharing the doll and playing together, getting something else for one of them to play with, etc. If they come up with in appropriate suggestions (eg “I want to keep it for myself”), then you remind them of the problem solving rule – they have to find a solution that they are both happy with (and one which you as the parent are happy about too).

Sometimes, they are upset to problem solve and then you might encourage them to share their feelings and to listen to each other. Sometimes you need to take a break before problem solving – “We will talk later to sort things out, Mum will hold onto dolly until then”. Problem solving can take a lot of time and require repeated attempts, but it always leads to more enduring solutions that the children take responsibility for.  In addition, it does not lead to resentment and instead improves the children’s relationship, as well as giving them skills they can use in lots of other situations.

The younger girl has the strength of being assertive and knows how to fight her corner, she just needs to learn the social skills of listening to others and accommodating their needs as well as her own. The older girl might be more of a peacemaker and sensitive to other people’s feelings, she just needs to learn to assert herself more often when something matters to her.

Handled well, their differences could be a source of connection between them as they grew up together. The younger girl might support her older sister to stand up for herself in the outside world and the older girl might show the younger one how to be sensitive to other people’s feelings.

Dr John Sharry is a social worker and psychotherapist and co-developer of the Parents Plus Programmes. His new book Bringing up happy confident children is now available.  See solutiontalk.ie.

Fair Deal nursing home scheme and the family home: how does it work?
8

20 ways to stop buying new clothes for ever
10