Should teenagers be allowed to drink after exams? 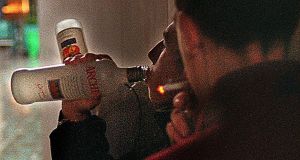 Knowing where your children are, what they are doing and who they are with is important. Photograph: Brenda Fitzsimons

It’s exam time and while parents are worrying about the stress their kids are going through, there is another worry in the back of their minds. What happens when the exams end and the celebrations begin?

Every year, newspapers are filled with pictures depicting our streets of shame, as young people blow off steam with a blow-out of alcohol. With some bars and clubs offering young revellers multiple drink promotions, celebrations can end in tears, and worse.

The country has long sustained a culture of drinking, but children and young people are particularly vulnerable because their bodies and brains are still developing. From the immediate issue of risky behaviour and alcohol poisoning to longer-term harm of delaying the development of vital coping, personal and social skills, the longer parents can keep children from drinking alcohol the better.

So what can parents do to prepare themselves – and their children – for the drinking games that follow exams?

“The best thing to do is talk them through the evening,” says Bobby Smyth, a consultant child and adolescent psychiatrist with the HSE adolescent addiction service. “Discuss where they are going, who are they with, what might the hazards be – and how will they be getting home.”

The issue may not just be the child who might drink too much, but the one who doesn’t drink that much and ends up caring for friends or feeling under pressure to drink more than he or she wants or is capable of coping with.

“The worry for parents is that young people may be exposed to drinks they aren’t used to, and amounts they can’t cope with,” says Dr Smyth. “There is no getting away from the fact that they are going out with the express goal of celebrating by getting drunk.”

To keep costs down, drinking is often done before they go out. If handed a drink they haven’t poured, they have little control over the the content. “The group I worry most about are young women,” Smyth says. “As the Rape Crisis Centre said recently, the number one date rape drug in Ireland is alcohol. Girls have to be very wary being handed a glass of some spirit concoction.”

The World Health Organisation’s global status report on alcohol and health in 2014 showed that Ireland has the second highest rate of binge drinking in the world. While the legal limit for drinking alcohol is 18, the report found that 39 per cent of all Irish people 15 and over had engaged in binge drinking, or “heavy episodic drinking”, in the past 30 days.

Teenagers who drink before the age of 15 are four times more likely to develop alcohol dependency than those who wait until they are 21. They are seven times more likely to be in a car crash because of drinking, and 11 times more likely to suffer unintentional injuries after drinking. Sustained and heavy drinking during teenage years can impair brain development and cause loss of memory and other skills.

The slightly more uplifting news is that nearly half of school-going children have never had a drink, and the number of teenagers under 15 years experimenting with alcohol has dropped.

“Children and young people just do not process alcohol as well as older people, and it can have serious repercussions,” says Suzanne Costello, chief executive of Alcohol Action Ireland. “Teenagers can be at risk of binging for a variety of reasons, including parental influence, peer pressure, and access to cheap alcohol.”

Some parents believe that introducing alcohol in a controlled manner, such as a glass of wine with dinner, will help their children become responsible drinkers. However, Smyth advises that “it is never a good idea to introduce alcohol to a child”. Research shows that it is ineffective and even counterproductive.

Research concludes that young people who are not regularly monitored by their parents are four times more likely to use alcohol or drugs. They are also more likely to begin drinking at a younger age, tend to drink more, and are more likely to develop harmful drinking patterns. The research also shows that sending out a clear message that underage drinking is unacceptable delays drinking in teenagers.

“The main motivation for teenagers having their first drink is curiosity,” says Smyth. “Then there is the pressure to join in and fear of missing out.”

Some teenagers start to drink because they think everyone is doing it. In fact, the stats show a decline in underage drinking.

“It’s definitely become a bit uncool among a certain section of young people who are choosing not to participate in the ‘get drunk as quick as you can’ ethos,” Smyth says. “While that is still the dominant view, there is a small growing minority who are taking a dim view of that and choosing to drink in a more controlled way.”

With price a driving factor for teenagers, one of the challenges for parents at this time is the environment in which their children are exposed to targeted promotions of cheap alcohol.

“We hope the Public Health (Alcohol) Bill 2016, which is due to return to the Seanad in the next few weeks, will help address the culture of drinking in Ireland,” says Costello. “The Bill looks at increased regulation of how and where alcohol is sold and marketing will protect children from exposure to advertising and support them in delaying the onset of drinking for as long as possible, which is the best approach for young people.”

So as parents hug their children and wish them luck in their exams, the pressure isn’t quite over. Waving them off to celebrate is as much a right of passage for them as for their kids.

“It is one night of hundreds, but it does sharpen parent’s focus, and it’s a chance to think about making sure everyone can talk openly about the situations that might arise,” says Smyth. “If it does wrong, wait a day or two to discuss how it went wrong, so they learn something from the experience.”

– Don’t give your child alcohol until they are 18, and explain that even then their bodies are not well equipped to handle large amounts.

– Keep an eye on your child; knowing where they are, what they are doing and who they are with is important.

– Keep track of their friends and places they go. Check that they are where they say they are, insist they keep their phone on and charged, and be available to collect them.

– Try not to preach , but encourage conversation by listening without interruption.

– Give your child some facts about alcohol and good reasons not to drink, from the fact that it can be dangerous to the risks involved in lowering inhibitions.

Support bubbles: Everything you need to know
7