Waste treatment: the power of poo 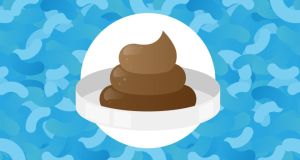 Everything we swallow is attacked by acids, bile salts and the full panoply of digestive enzymes. But there are also 100 trillion bacteria down there, and that’s apart from assorted gut-associated viruses, fungi and protozoa.

So how should we approach the idea of infusing this potent source of wildlife from a healthy person into the bowels of someone whose gut microbes have been altered by disease?

Although it’s a recent addition to a familiar category occupied by kidney, liver and other solid organs, faecal microbial transplantation (FMT) had early beginnings, as a letter in the November 2012 issue of the American Journal of Gastroenterology acknowledges: “During the Dong-jin dynasty in the 4th century in China, Ge Hong, a well-known traditional Chinese medicine doctor, described the use of human faecal suspension by mouth for patients who had food poisoning or severe diarrhoea. This yielded positive results . . . a medical miracle that brought patients back from brink of death.”

FMT is the transfer, by infusion, of donor faeces into a recipient’s gut, with the aim of improving microbial diversity, and its development in modern times stems from the late 1950s, when four patients with enterocolitis were treated with faecal enemas. However, the current rise in FMT has been ascribed to two events. First, the finding that when germ-free mice were colonised by microbes harvested from obese mice, their total body fat increased compared to germ-free mice colonised with microbes from lean mice, thus identifying the gut microbiome as contributing to the pathology of obesity. Second, the increasing severity of Clostridium difficile infections (CDIs) has been the main cause of antibiotic- and healthcare-associated diarrhoea over the last 20 years.

In 2016, at a European Consensus Conference, experts agreed that FMT is an important therapeutic option for CDI and may help in other conditions with altered gut microbiomes. Current Irish guidelines recommend specific antibiotics for an individual’s first non-severe CDI episode and the first non-severe recurrence, with FMT recommended for second and subsequent recurrences.

Prof Fergus Shanahan is both professor and chair of the Department of Medicine at University College Cork, and director of APC Microbiome Ireland, which was founded as the Alimentary Pharmabiotic Centre in 2003. He told The Irish Times: “FMT is suitable for patients with recurrent CDI. This treatment is available in Ireland and was first performed in Ireland in Cork, where it has been carried out for patients with recurrent or persistent CDI.”

How much donor faeces is transferred, and how safe is the procedure?

When the European Consensus Conference discussed the amount to be administered, they noted that although 30g of faeces has achieved successful FMT, most studies report using 50g. As for safety, a 2016 review in the Journal of Hospital Infection considered the use of FMT in 1,555 patients, finding that “the vast majority” of adverse events connected with FMT are apparently mild, self-limited and gastrointestinal in nature. The authors emphasised, however, a need for more trials to further define FMT-associated risks.

Shanahan too notes that FMT is not without hazard: “Other than the risk of transmission of an infection, the transplanted microbiota might confer an increased risk of antibiotic resistance genes in the transplanted microbes and might even confer a risk for future development of metabolic disorders or other intestinal disorders, depending on the precise composition of the donor microbes.”

And he also comments that FMT requires donor faeces to be rigorously screened for infectious agents and that donors must be truly healthy. “As an alternative to donor stool,” adds Shanahan, “it is occasionally possible for an individual to bank stool for later use in the event of antibiotic-associated CDI. In this instance, the FMT is referred to as autologous: the donor and recipient are the same.”

How effective is FMT for CDI? A report in the British Medical Journal in 2016 described a study of 46 adults with at least three recurrences of CDI who were randomly assigned to either receive a FMT from a donor or undergo an autologous transplant with their own banked faeces. Whereas the diarrhoea resolved in 62.5 per cent of the autologous group, 90.9 per cent of those undergoing FMT from a donor achieved clinical cure.

Is FMT applicable to conditions other than CDI? “Outside the particular indication of recurrent CDI,” says Shanahan, “all other uses of FMT are experimental and should not be performed outside the setting of a research trial.”

Perhaps unsurprisingly, one of the challenges of establishing a frozen faecal bank from healthy donors is recruitment. For example, in an Australian study, when 116 potential donors were recruited, almost 50 per cent were unable or unwilling to meet requirements. Further, “[A] surprisingly large proportion of healthy and asymptomatic donors failed stool testing, primarily due to gastrointestinal parasites.” Nonetheless, faecal banks have been established. For example, the non-profit Microbiome Health Research Institute was founded in 2012, its aim to expand safe access to FMT and facilitate research into the human microbiome.

As for future directions? Prof Shanahan is clear: “In the future, we will be using artificial stool, where the composition of the donor faeces is assembled with microbes that are well characterised and known to be safe.”

It seems likely that the therapeutic scope of FMT as a viable treatment option for conditions beyond recurrent CDIs will widen. Yet, despite its distant historical origins, the FMT evidence base is only beginning to emerge.