On the menu: Some like it hot in the great outdoors 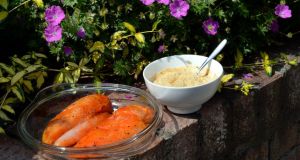 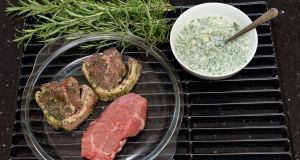 With more glorious weather promised, alfresco dining is alluring to say the least. The aromas wafting from barbecues around the country is the best summer smell, and making just a few adjustments to your grilling technique can be good for your health too.

Not only is the quality of your meat important, but so too is how you barbecue. Research suggests that cooking meats at very high temperatures creates chemicals that can potentially increase our risk of developing cancer.

Certain compounds formed during the cooking of meat, such as heterocyclic amines (HCAs) and polycyclic aromatic hydrocarbon (PAH), have been identified as possible human carcinogens.

HCAs are formed when amino acids (the building blocks of protein) and creatine (a natural compound found in muscle meats) react at very high temperatures.

Barbecuing meat provides the right conditions and more HCAs are produced the longer and hotter the meat cooks. HCAs are mutagens and they can bind directly to DNA, promoting cancerous cells. Studies have linked frequent ingestion of HCAs to an increased risk of pancreatic and colorectal cancers.

A study published in Carcinogenesis (2012) from the University of Southern California (USC) found that cooking red meats at high temperatures may increase the risk of advanced prostate cancer by as much as 40 per cent.

This related to men who ate more than 2.5 weekly servings of red meat cooked at high temperatures.

“The observations from this study alone are not enough to make any health recommendations, but given the few modifiable risk factors known for prostate cancer, the understanding of dietary factors and cooking methods are of high public health relevance,” according to Mariana Stern, associate professor of preventive medicine at USC.

Smoke contamination
Another cancer-causing agent, PAH, is produced when fat drips from the meat onto the flames and produces smoke. The PAH-filled smoke rises and coats the food, contaminating it. PAH also appears to be created when flames touch the meat itself, charring it.

That said, there is no need to give up barbecued food. Some people cook inside at lower temperatures and then “finish off” their protein-rich foods on the barbecue. You can also use any or all of the following tips to minimise the formation of carcinogens.

Clean your barbecue grill: Scrubbing down the grill before or after you barbecues can minimise the build-up of carcinogens.

Size matters: Select smaller cuts of meat to speed up the cooking time and thereby reduce exposure. So, instead of grilling a whole steak, make kebabs more frequently.

Marinate your meat: Kansas State University researchers found that marinated steaks contained 57-88 per cent less carcinogens. The marinade may create a protective barrier between the meat’s proteins and the heat of the barbecue. The other theory is that the antioxidants in marinades made with olive oil and lemon juice might decrease the HCAs. Choose marinades without lots of sugar, as thicker marinades tend to char.

Work the grill: Depending on your barbecue, it may not be the same temperature throughout – some have hot spots while others have cooler areas. If you have a flare-up, just move the food to a cooler part of the grill until the flames die down.

Turn the meat frequently to speed up cooking time: Use tongs or a spatula rather than a fork to avoid releasing juices that can drip and cause flare-ups.
Bin anything very burnt: A bit of char is unavoidable and let’s admit it, it tastes good. But as the blackened parts of meat may contain more carcinogens, remove as much of the blackened bits of food before eating.

Increase veggies: Grill family-favourite vegetables on kebab sticks. They contain little protein, therefore less harmful HCAs. In fact, diets that are high in plant foods in general are associated with a reduced risk of several cancers.

Adjust your technique: Remember Barbecuing occasionally is not a problem as our bodies are fairly resilient. But you may want to adjust your technique a little, especially if you eat large portions of blackened meats and where there’s a family history of cancer.

For some barbecue fans, these changes may be a lot to stomach. And let’s put things in perspective. A great number of diseases, such as cancer and diabetes, have a hereditary component. These are called “multifactorial” diseases because they are caused not by a single gene mutation, but by a combination of genetic and environmental factors working together in ways that aren’t yet fully understood. Barbecuing is just one of many environmental factors within our control.

This week it’s marinades in minutes. Here are a couple of simple ideas that help me use up the potted herbs from my garden or the coriander I buy from the supermarket. You can use these marinades on meat, chicken or fish.

Mix the yoghurt with the tikka paste and add some chopped or whole chicken fillets and half of the coriander, making sure all the chicken is coated in the marinade. Leave for at least one hour in the fridge, or overnight, then cook on the barbecue. Sprinkle with the remainder of the chopped coriander when cooked.

Mix the lime, yoghurt, seasoning and half the mint. Spoon the marinade over lamb and leave for an hour. Cook on a moderate grill, turning occasionally. Sprinkle with the remaining mint and serve with new potatoes and veg or salad. A few key best-in-season vegetables such as courgettes, red onion, peppers and mushrooms can add some colour to kebabs too, should you wish to dice the lamb.

Paula Mee is lead dietitian at Medfit Proactive Healthcare and a member of the Irish Nutrition and Dietetic Institute. medfit.ie Tweet @paulamarymee