Losing fat, gaining muscle with my (not so) scary personal trainer

Dominique McMullan is getting married in July. Follow her as she gets fit for the big day 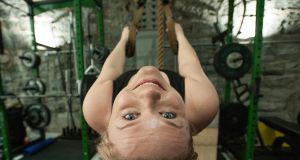 I’m nervous when I go in to get my measurements with John Belton. I’ve been training with him for 2½ weeks now, and in that time I’ve done at least 10 times more exercise than I normally would. Working out three or four times a week is not familiar to me.

This halfway point marks a real change in lifestyle – and, hopefully, the beginning of a journey to a fitter, healthier, wedding- ready me. God, sorry, I sound like one of those mindful, #fitspo lean machine type people, don’t I?

Well, let me reassure you, I’m not there yet. In the 2½ weeks I have been training, I happen to also have attended two hen parties. One of them being my own.

Yes, I knew they were coming. I made clear to Belton that while I would be entirely dedicated to his regime, I wasn’t going to be missing out on any fun. (Can I not have toned fit body and drink all the gin and tonic?)

Understandably, Belton wasn’t entirely impressed; this is the kind of man who would later scold me for having a chocolate rice cake. But he also understood my dilemma, because as I would later learn, he sometimes enjoys the fun bits of life.

As I have said before, on first meeting Belton comes across as quite scary. His demeanour is serious and he looks as you would expect, very toned and muscular, like he could probably lift a small car. He is dedicated to perfecting the human form; and because of this he’s determined, motivated and direct.

He doesn’t take any nonsense. In one of my first noisy squat sessions, a quiet “love the dramatics” side quip put me right back in my box.

But the more we train, the more I am getting to know a different side. Belton loves dancing and Damien Dempsey sometimes makes him cry, especially around Christmas. His two brothers work and train with him; he used to do musical theatre; and, prepare yourself for this, sometimes he drinks at the weekends.

I can’t tell you how much of a relief it is to see a human side of someone so involved in the world of fitness. Looking back, my preconceived ideas about “gym people” had always made me exclude myself from that world. I was never going to be someone who picked working out over a night out. I was a “fun” person, not into self-denial and punishment.

Back to those measurements. Any diets I have done in the past have been solely focused on losing pounds, and Belton warns me that with all the working out I have been doing, pounds will not have dropped off. Muscle weighs more than fat; so while I will be losing fat, I will be gaining muscle.

I have lost three pounds and my body fat has dropped 3 per cent, so I still have about 10 per cent to lose to get to my goal. This is quite a lot really, and I try not to feel dissatisfied.

It’s in the inches that I can really see the results. I have lost half an inch off my chest, one inch off my bum and two inches off each thigh.

This makes me feel a bit better. I’ve also lost a noticeable amount around my face. Belton tells me that these facial measurements indicate that I have stopped eating something that I was intolerant to.

My diet over the past two weeks has consisted mostly of green vegetables with proteins such as eggs, chicken, fish and beef, as well as nuts and some fruit. It’s pretty tough to tell what was causing the intolerance, but not eating processed food and avoiding bread, pasta, potatoes and rice has left me feeling much better. My skin is clear and my hair more glossy.

While I have not been hungry once, I have craved sugar and longingly look at my fiancee’s potato-laden dinners every night. Meals without carbs are significantly less delicious.

Carbohydrates aside, working out and eating healthily haven’t been as difficult as I had anticipated. The Everest of exercise had loomed over me for so long that I had lost all perspective. Turns out it’s more like the Sugarloaf of squats.

This is in large part thanks to the trainers, who understand how far to push me and when to stop. But it’s also due to a game of inter-cranial tennis that the healthy side of me happens to be currently winning. It seems “gym brain block” is 90 per cent of the reason people avoid the gym.

The longer you leave it, the more impossible and awful the thought of lunging and shoulder presses become. And then one day, when you are feeling particularly athletic, you brave the gym floor and remember that it’s not so bad. Back and forth the slow game goes.

Trust me, there is no #fitspo here, but despite the broccoli, sweat and tears, I might venture to say that the Serena Williams of my brain is winning.

Despite dreading going into the gym, I find myself beaming and full of energy after each session, ringing my fiancee to tell him how many lunges I managed. And hen parties aside, as things are always going to get in the way of diet and exercise, it’s quite satisfying to say that I can now lunge all the way up and down a room. Australia next week, so hopefully I will manage to keep up the momentum.

See you on the other side, gym bunnies.

Pandemic Pregnancy: Clothes, walking and not yet telling your colleagues about the baby

Would Covid sceptics express their views to families who have lost loved ones?

With a stretch in the evenings, you might be inspired to take on a longer distance