Much difficulty arises from bends in the ear canal. One hearing aid manufacturer has found a way around this 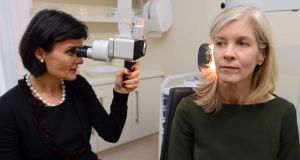 The closer you stand to a dartboard, the more bull’s eyes you’re likely to hit is an analogy clinical audiologist Mark Sanford uses to describe one benefit of Lyric, an invisible hearing aid.

Because the ear canal isn’t straight but has two bends which vary in severity from person to person, it’s important that eardrums are as close as possible to hearing aids so that the sound they magnify hits what Sanford calls the “bull’s eye”.

“In most ear canals, [Lyric] will sit 4mm from the eardrum,” he says, adding that many other traditional hearing aids get within only 16mm.

The product, which is produced by Phonak hearing systems, is just one of several hearing aids which sit completely in the ear canal. Most of the industry’s big name players – such as Oticon, Starkey, Siemens and ReSound – have launched in-the-ear, or “invisible”, hearing aids. Each company is striving to make devices smaller, better and less conspicuous in order to grow their share of a global billion euro market.

Sanford, who has been working in hearing healthcare for over 20 years, claims that because Lyric doesn’t use digital technology to mimic natural noises, the sound quality is better when compared with other devices.

“All my rock stars, all my musicians prefer Lyric over traditional devices,” he says, adding that one particular client hasn’t worn anything else since. “It’s allowed her to actually play music again.”

Hearing aids that can stay inside your ear for months at a time are also a huge benefit to anyone suffering from hearing loss.

“You and I take for granted that at two in the morning the phone rings [and] we hear it. Alarm goes off at six in the morning, we hear it,” Sanford says. “Traditional device patients . . . They take their hearing aids off and the world kind of goes away.”

The Lyric device is disposable but patients don’t purchase new sets every time they run out. Instead they pay for a subscription service which replaces the hearing aids whenever necessary.

Unfortunately, cramming all this technology into such a small space doesn’t come cheap. A one-month subscription for a set of Lyric devices will cost you about €340 (around €4,100 annually).

Traditional hearing aids should last four to six years and a pair should cost roughly €2,000-€6,000, according to Brendan Lennon who is head of information at DeafHear, an organisation promoting equality for Deaf and Hard of Hearing people in Ireland.

Assuming a traditional set of hearing aids lasts five years, Lyric could end up being anywhere from three to 10 times more expensive on an annualised basis.

Replacement sets
For the majority of people, Lyric devices will last between 70 and 90 days. Roughly speaking, a subscription entitles patients to a new set every 52 days (ie, up to seven devices per subscription). As with many new or invisible hearing aids, the device is accompanied by a remote control that allows users to adjust the volume and turn it off.

An integrated removal tool also permits patients to extract the hearing aids at any time. “Pain is your body telling you something is wrong. If you have a pebble in your shoe and it hurts, you take it out,” Sanford says. “Lyric is no different . . . That’s why the patient can remove it.”

“After arthritis and heart disease, it’s the third most common problem among people who are 60 years of age and older,” he says. While not as high, the statistics in Ireland are significant. More than 92,000 people (about 2 per cent of the population) are either deaf or have reported a hearing-related disability, according to the 2011 census.

Sanford notes that in the United States the problem is further exacerbated because over 60 per cent of people who go to their doctor with a hearing problem receive no recommendation. His words are echoed by Lennon, who says that in Ireland most people will suffer hearing loss for several years before getting fitted with a device.

Social stigma is another reason for unresolved hearing loss. Lennon says that the condition can lead to people spending more time inside or alone, avoiding interaction with others.

The poor employment rates among those with a hearing impairment offer support to his claims. Less than 57 per cent of affected people aged 15-65 participate in the workforce, according to figures from the Central Statistic Office.

Sanford notes that numerous clients, including top-level chief executives, have refused to wear visible devices because they worry how others will perceive them.

“They’ll say I’ll wear that, I’ll try that,” he says about invisible hearing aids. “It’s funny how well glasses are now accepted but hearing aids certainly are not, unfortunately.”

Virtually invisible
For people conscious about wearing conspicuous devices, the appeal of invisible hearing aids like Lyric, is understandable.

It is practically invisible: at very close range, it can be seen from only a tiny number of angles. Generally, you would actually have to be looking for the device to see it.

Invented by Dr Robert Schindler from the University of California, the product has grown in popularity since it was first launched in 2007.

“In the first nine months of [2013], there were over 108,000 Lyrics put into patients’ ears in the United States,” Sanford claims. However, it is still not anatomically suitable for about 15 per cent of people.

“Certain ear canals are too narrow or too short,” Sanford says, adding that other people may have a level of hearing loss which is too severe for Lyric hearing aids.

Phonak and their competitors are developing innovative designs to solve these problems. Fitting Siemens’ “eclipse” hearing aid involves taking a silicone mould of your ear to ensure comfort.

Sanford hopes that “at some point” traditional devices will no longer be necessary, adding that huge advances have already been made between the first and second generation Lyric products.

“I don’t know what the potential is but hopefully it will be able to improve to fit more and more people,” he says.

Case study: ‘being able to hear whispers is just brilliant’

Despite having a hearing problem for a “good 10 years”, Felicity Fanning, from Clontarf in Dublin, says it took her a while to “actually do something about it”.

Her particular condition tends to occur naturally in people as they get older, however, it happened to her at a much earlier age.

“The little hairs that bring the sound from the outer ear into the ear canal and then to the brain, they have flattened,” she says. “They’re not waving back and forth, catching all the sound waves.”

This means she can only hear sounds at certain frequencies.

Fanning opted to try Lyric after using an over-the-ear device for the past four to five years. One week later she’s already noticing a difference.

“The other one was great but the sound quality that comes out of the Lyric is just phenomenal,” she says, adding that it gives her “confidence” knowing she’ll be able to hear somebody the first time they say something.

“I found it a bit embarrassing always having to ask people to repeat themselves.”

She adds that the device is comfortable but having something in your ear the whole time requires a little time to get used to. “I know it’s there, but there’s no discomfort with it.”

In spite of this, she says that being able to wear hearing aids 24/7 is “very convenient”.

“What would happen before is that I would take my devices out to have a shower or . . . doing any sporting activity and forget to put them back in,” she says.

“I’d arrive into work and I’d think ‘Oh, I forgot my hearing aids.’

“That just won’t happen with these because they are in there all the time.”

As an administrator for a mental health service, Fanning works in quite a confidential environment. Because of this, people often speak in a low and quiet voice.

With a smile, she leans forward and says “being able to hear whispers is just brilliant”.

Róisín Ingle: I’m menstruating as I write this. And I’m mad as all bloody hell
5