‘My worst fear was realised – I had no sperm’ 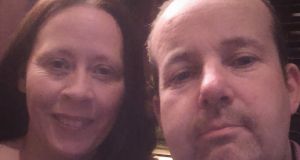 Marc Harris with his wife Marisa: “my rock”.

Marc Harris was just five-years-old when he had his first brush with cancer. The Mullingar boy was taken for a check-up, as he had a cold that wouldn’t clear up and an unexplained bruise on his arm.

But while these symptoms seemed innocuous, they were the first signs of a disease which would affect him for his entire life.

“After mam brought me to the doctor, I was referred to a private hospital which, in turn, sent me to Our Lady’s Hospital in Crumlin, ” he says. “I don’t remember too much detail, but apparently I was on a treatment plan for 2½ years and I can recall some of it – the endless IV drips, butterfly cannulas, chemotherapy and radiotherapy and I can remember having to go with a nurse in a taxi for the radiation while my dad followed in the car behind – and being annoyed by this.

“Being a five-year-old with leukaemia was probably a big deal, but all I wanted to do was get better, go home and go out to play – but wouldn’t always have the energy. One time when I was in hospital I felt really lonely and missed home so much that I ‘found’ the key to unlock the telephone so I could ring my mam at work, needless to say I got caught.”

His early cancer battle forced him to miss starting school with his peers and instead he had home schooling until he was able to begin in third class. Unsurprisingly, this was not an easy transition, particularly as treatment had left him smaller than most boys of his age.

“I entered St Mary’s CBS in third class, not knowing anyone and because I was small for my age I was an easy target for bullying,” he recalls. “But once the leukaemia was cured, I started on a growth hormone which doctors thought would help with my height. I remember having to inject each leg daily for alternate weeks and then getting an abscess on my left leg which had to be surgically removed – it wasn’t much fun.”

But despite the lack of enjoyment over his treatment, Harris, now 42 and married, who works as a parts manager in Longford and a wedding DJ, was delighted to be finally cured of cancer. However, life took another unfortunate turning and six years ago, he had another health scare.

“In October 2012, I was working under my car one evening and I must have blacked out because I woke up on a stretcher in the back of an ambulance,” he says. “I was taken to hospital where I had a CT scan and the following day an MRI. I had no idea what was going on, so when the doctor told me that I had a brain tumour I thought he was joking.”

The next day Harris was rushed to Beaumont hospital where he underwent surgery to remove the tumour. Thankfully, it was not malignant, but he found the whole process extremely daunting.

“Thankfully, the brain surgery was a success and the tumour was benign, but it was probably caused by the radiotherapy which treated my leukaemia 30 years previously,” he says. “Recovery was hard – I had a load of fluid gushing around my head where the tumour had been and I couldn’t drive for 12 months, which was my biggest gripe.

“But then an MRI in early 2016 showed another speck which raised some concern so I was referred for CyberKnife radiation, which blasted the area with pinpoint accuracy and eliminated any trace of the tumour. Thankfully, this seemed to do the job and I still have regular MRIs to make sure nothing else crops up.”

Today, Harris is tumour-free, but his cancer journey left him with another scar which has severely affected his life – infertility.

“Shortly after we got married, Marisa and I started trying for a family and as nothing happened we decided to go to a fertility clinic, where I had a procedure to find out if I had any sperm,” he says. “When the results came back, my worst fear was realised – I had no sperm. All of my life I wanted to be a dad, even if I could be just half as good as my own dad had been.

“I’m an only child and felt like I had let my parents down – I was sad, angry and really peed off at the world in general, particularly as doctors said it was due to having cancer treatment. Suddenly, all our plans had changed, but Marisa was really supportive through it all and, after discussing our options, we decided to go for sperm donation. But, unfortunately, after 10 unsuccessful rounds of IUI and IVF we were heartbroken – emotionally and physically – and we just couldn’t go any further so we decided to end the treatment.”

The couple are still coming to terms with the reality that they can’t have a baby of their own, but Harris says being open and honest with each other is crucial and he is grateful for his health, his family and his wife, who together will continue to remain positive and forward thinking.

“Some days can be hard, but Marisa and I have shared it all and this is key to making a relationship work,” he says. “So I would advise anyone who thinks they have fertility issues to get checked out sooner rather than later. It’s not something to be ashamed of and is more common than you think. And most importantly, talk to your partner as you are both in this together.

“Health-wise, I’m doing well today – I’ve lost a bit of hair due to radiation, but it would have fallen out sooner or later. So, other than that, I’m enjoying life. I’m busy in work and enjoying spending time with Marisa, my rock, who has been by my side for over 12 years, though thick and thin.

“She, along with my parents, have been there for me always. And I can’t even begin to imagine the heartache, hardship, worry and pain my mam and dad must have felt when I was going through treatment – working night and day, they both fought so hard to give me a chance and I’m sure they often made sacrifices that I still don’t know about. They are the absolute best parents that anyone could ever wish for, I just hope they realise that.”