Is electronic prescribing the next step towards paperless hospitals? 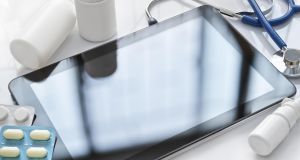 Electronic prescribing has been identified as a key priority for the State in the National eHealth Strategy published in 2013. Last year, standards that will enable doctors to prescribe medication electronically to help reduce errors were published by the Health Information and Quality Authority (Hiqa).

Within hospitals, advocates argue that electronic systems can help reduce the errors that inevitably arise with handwritten prescriptions by making the name of medications more legible, setting limits for dosage, and flagging potential negative interactions.

Peter Kidd, pharmacist of clinical services in Galway University Hospital who also has a background in IT, believes electronic prescribing offers a much safer form of prescribing than those written by hand.

“Instead of illegible writing on a piece of paper, you have 100 per cent legibility,” he says.

“Depending on the nature of the system, you can have a lot of information available to the prescriber at the point where they are actually prescribing the drug. So you can signpost things and give them decision support.

“You can say, for example, if the patient has kidney disease, consideration should be given to reducing the dose, or if the patient is on such-and-such a drug, there may be an issue with an interaction. That makes it a lot safer. And you can put limits on dosage so you can pretty much eliminate serious overdose errors.”

The association’s annual conference, which was held last month, heard about the clinical benefits such systems can bring when they are properly installed and supported.

One presentation focused on the introduction of an electronic software package for chemotherapy and haematology drugs in the Mater hospital pharmacy in July 2015, which led to prescribing errors being reduced by more than 50 per cent. At least one error was found in 29.4 per cent of handwritten prescriptions, compared with 13.7 per cent of electronic prescriptions using the Cato system, an integrated software system.

The average number of omissions per handwritten prescription was three, compared with zero for electronic prescriptions.

The need to improve the safety systems for prescribing toxic cancer medications has been acknowledged by the National Cancer Control Programme (NCCP), which is in the process of purchasing a national clinical information system.

The NCCP wants the system to provide a comprehensive view of the patient’s cancer treatment in order to reduce risks associated with chemotherapy prescribing, while accommodating the complex rules and requirements of specialist cancer care.

Electronic prescribing is common in Irish hospitals within intensive care units. Delivering care in paediatric ICUs is especially challenging as patients can weigh as little as 500g or over 100kg, which requires prescribers to do frequent, and often complex, dose calculations.

Few medicines are licensed for use in children, meaning nurses and pharmacists often need to do further calculations and manipulations of adult dosage forms to prepare and administer suitable doses, which furthers the potential for error.

It took two pharmacists, who had to input over 23,000 pre-set dose limits into a drug file containing more than 500 different formulations, a year to complete this work. These in-built limits serve to either alert or prevent doctors from prescribing doses outside of safe dose ranges.

This is a crucial safety feature which prevents dosing errors known to occur in paediatrics.

Moninne Howlett, senior pharmacist at Crumlin, has undertaken an audit of more than 4,500 prescriptions written either on paper or electronically between 2011 and 2014 in the ICU to show the benefits of the new system.

Preliminary data from the audit has shown a modest reduction (10 per cent) in the total number of medication errors. However, reductions of 75 per cent are evident in prescriptions for medications that are run through infusion pumps or drips, she says.

Howlett says this is likely to be both a combination of the electronic prescribing and the way the unit was able to standardise how these medicines were prescribed through the use of smart-pump technology, which also has pre-programmed dose limits.

She stresses that the new technology has not completely eradicated error, but added that those that now occur are not as serious as before.

“Some errors disappear altogether but we do see new types of errors,” Howlett says. “Thankfully, the vast majority of these are very minor, are quickly visible and rectifiable and, therefore, do not impact on patient safety.”

Examples of these new errors are where a prescriber selects incorrectly from a list of pre-filled prescriptions on offer to them, or where autofilled information gets carried from one prescription to another inappropriately.

“The existence of these new errors however does show us that great care must be taken when implementing health information technology,” Howlett says.

“This changing pattern of medication errors, which has also been reported in other studies looking at electronic prescribing systems, highlights the need for more funded research in this rapidly evolving area.”

The new National Children’s Hospital is intended to be almost fully digital so the technological innovations achieved at Crumlin, as well as at the other paediatric hospitals, will be important in ensuring this ambition is realised.

Plans for both community and hospital pharmacy are contained in the national e-Health strategy, which is finally being rolled out by the HSE.

Part of the strategy and central to the electronic prescribing agenda is the creation of a single drug file for Ireland, which will enable medicines, regardless of geography or setting, to be recorded in the same way against a national coded system.

This project, as well as other initiatives under the strategy, is still in its early stages, but offers hope that the fragmentary manner in which hospital IT systems have developed in the past may be coming to an end.

The further implementation of electronic prescribing and other pharmacy informatics systems in Irish hospitals will require not only considerable capital investment, but also the participation of hospital pharmacists with the requisite technological expertise. It will also require a determination from healthcare management to bring the State’s healthcare infrastructure into the 21st century.

Muiris Houston: A general election is a chance for us to say to politicians ‘enough is enough’

Being a Carer: Lynn McDonald on the challenges when your child has a life-limiting condition

‘If something happens to me, what will happen to my girls?’
4