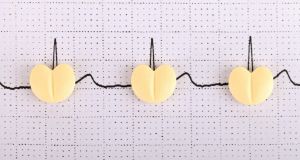 New international guidelines, that question the benefits of low-dose aspirin to prevent first-time heart attack, rely on research by an Irish expert. Cork-born Prof Bill McEvoy, who is regarded as a world leader in heart health, led the evaluation of studies on aspirin use for the American College of Cardiology and the American Heart Association.

The advice issued by the two bodies in the United States at the weekend contradicts previous guidelines on the benefits of low-dose aspirin for those who have never had a heart attack – but who have “high risk”. This risk is based on factors such as diabetes, smoking, high blood pressure and high cholesterol.

Aspirin will still be recommended for those experiencing a heart attack or stroke, or at risk of recurrence, due to the medication’s ability to prevent blood clots. However, its benefits are now more questionable for people who haven’t had a heart attack, due to the possible associated risk of aspirin causing internal bleeding.

Prof McEvoy, who recently returned to Ireland to take up the post of research and medical director at the Galway-based National Institute for Prevention and Cardiovascular health (NIPC), began the research while in the US. He was attached to the Johns Hopkins University School of Medicine when the study got under way and continued to lead this aspect of the work when he took up the post at the NIPC last autumn.

The NIPC was established by west of Ireland cardiology foundation Croí in collaboration with NUI Galway (NUIG), and Prof McEvoy is one of two leading heart experts attached to it. He is also a consultant cardiologist at Galway University Hospital and a professor of preventive cardiology at the university.

His colleague is Prof David Wood, formerly of Imperial College, London, and past president of the World Heart Foundation, who relocated to Galway and is adjunct professor of cardiology at NUIG.

The link between low-dose aspirin in heart health dates back to the 1970s, when it was discovered that it inhibits platelet cells and heart attacks caused by clots. “If a patient is administered aspirin in an acute situation, it reduces the risk of cardiovascular disease by 30 per cent,” Prof McEvoy explains. “The early studies – which also showed that it could prevent a first-time heart attack – took place at a time when there was a lot of smoking, and much more high blood pressure incidence and risk from cholesterol.

“Some of those early studies were on doctors, and were conducted at a time when smoking was so prevalent within hospitals that interns often carried the ash trays for consultants,” he recalls. Now, however, we have great medication for blood pressure and cholesterol, while smoking is far less common. So the main risk for heart disease now is ageing.”

It is more than 10 years since comprehensive recommendations were published on aspirin’s impact in this context, he notes.

His team studied data from a series of clinical trials reported on last year, working to “quite an ambitious timeline”.

Research published by the European Society of Cardiology last August found that the “jury was still out” on whether people at moderate risk of a first heart attack or stroke should take daily aspirin to lower their risk.

The European research drew on the results of the “ARRIVE” study, as in “Aspirin to reduce risk of initial vascular events”, published in the Lancet medical journal.

That study assessed the impact of daily aspirin on 12,546 participants who had no prior history of a stroke or heart attack, but were at “moderate risk”, as in a 20 to 30 per cent risk in 10 years.

Principal investigator Prof J Michael Gaziano of the Brigham and Women’s Hospital, Boston, said that participants who took aspirin tended to have fewer heart attacks, particularly those aged 50-59 years, but there was no effect on stroke. “As expected, rates of gastrointestinal bleeding and some other minor bleedings were higher in the aspirin group, but there was no difference in fatal bleeding events between groups,” he said.

He advised that “the decision on whether to use aspirin for protection against cardiovascular disease should be made in consultation with a doctor, considering all the potential risks and benefits”.

Prof McEvoy says that there has been much more “shared decision-making” between consultant and patient, reflecting an increasingly individualised approach to medical care. “Many patients who are given the choice between a bleed and heart attack or stroke would prefer to run the risk of bleeding. Most of this bleeding is non-fatal, but patients have to weigh up the risks against the benefits in consultation with their doctor.

“A lot of people on aspirin may be worrying now, but there is not enough evidence to show that they should stop taking their daily low dose. These new guidelines only relate to primary prevention, while aspirin’s benefits in secondary prevention are still accepted.

“So yes, aspirin will still be administered by paramedics for someone at risk, or undergoing, a cardiac event in an ambulance.”