How to develop the skill of lucid dreaming 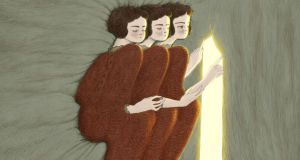 People pursue lucid dreaming for all kinds of reasons: as a mental challenge, for therapeutic purposes or as an amusing hobby. Illustration: Pei-Hsin Cho/The New York Times

Questions about the phenomenon of lucid dreaming – that is, experiencing consciousness while in a dream state – have been tossed around for thousands of years. Aristotle wrote about lucid dreams in 350 BC, and Buddhists have practiced “dream yoga” for centuries.

Such dreams have underpinned literary and cinematic plots (Alice’s Adventures in Wonderland, Inception), as well as scientific studies on sleep; a review of such studies, published in 2019, found that brain activity during lucid dreaming is distinct.

More recently, lucid dreaming has become a kind of sport – fodder for countless life-hack-style posts on Reddit, YouTube and TikTok, where people expound on their moments of mid-sleep awareness and trade tips about how to increase the frequency of lucid dreams.

In theory, anyone can have a lucid dream; after combing through 50 years of research on sleep and dreaming, a group of scientists concluded that about half the global population has experienced one. “From everything we know, if people really try to start engaging with the topic and maybe do some training and so on, most people at some point will have a lucid dream,” said Martin Dresler, a cognitive neuroscientist at Radboud University’s Donders Institute for Brain, Cognition and Behaviour in the Netherlands.

Daniel Love, a lucid dream educator in Truro, England, said that he has observed a wide range of experiences with lucid dreaming. “Over years of teaching, I found a huge variety in the abilities [of] people and some people who just can’t get past certain blockages,” he said. Skilled lucid dreamers may only have one every few weeks.

There are two commonly recommended techniques for developing that skill, both of which take time and practice, and don’t always bear fruit. The first is to record your dreams in a journal and look for patterns within them. I noticed, for example, that many of my dreams take place in my parents’ attic and my elementary school gymnasium. Now when a dream takes place in either of those spaces, it should be easier for me to recognise it for what it is.

The second technique often touted for promoting lucidity is “reality checking”: questioning one’s consciousness during waking hours through simple tests like counting fingers. Once those checks become habitual, Love said, they may occur during a dream state, where logical outcomes could have dreamlike distortions – the wrong number of fingers, for instance.

Lucid dreaming essentially is hacking the world’s most complicated computer: the human brain

The internet is saturated with other tips, of course, spilling out of YouTube videos, Reddit posts and blogs, not to mention the endless virtual classes, books, coaching, devices and even supplements, like melatonin and vitamin B6, that claim to help people achieve lucid dreaming.

In one small study of 35 people over eight nights, a drug designed originally for treating Alzheimer’s symptoms induced lucid dreams. Dr Ralph Carlson, an educational psychologist at the University of Texas Rio Grande Valley and an author of the study, asserted that no one should take any drug without first consulting a physician.

Still, even those who sell such products and services said they are not necessary. “You really don’t need to throw money at this subject,” Love said. He offers coaching and sells books, but said that they’re “there for people who are struggling, who just want that extra push, but they don’t need it.”

It’s a sentiment shared by Nate Turner, a 19-year-old bartender in Michigan whose TikTok videos about lucid dreaming have earned him a following on the app. His advice to beginners sifting through online tips –“If it sounds too good to be true, it’s probably not true.”

Love echoed that point. “Lucid dreaming essentially is hacking the world’s most complicated computer: the human brain,” he said. “So anyone who’s promising to give you lucid dreams in five days, one day, 30 days? That’s impossible.”

Jay Mutzafi, a moderator of r/LucidDreaming on Reddit, spends a lot of time removing posts that might mislead prospective lucid dreamers. He believes that the community element can be helpful for those starting out, to ask questions and trade notes. But at the same time, he warns, it can be detrimental to compare yourself too much with others: “It’s all subjective, personal experience. Different brains work differently.”

People pursue lucid dreaming for all kinds of reasons: as a mental challenge, for therapeutic purposes or as an amusing hobby. Turner described his experiences as “a video game world inside my head.” My own practice has evolved out of a grim immediate reality, set against a pandemic now in its second year. I felt stuck in my life, and desperate for control. My grandfather is terminally ill, and I spend several nights a week sleeping on his couch to be available to take care of him. While there, I keep a dream journal and practice reality checks.

Sleeping in a foreign environment often promotes more vivid dreams and the disruption of sleep can promote lucidity, according to Dresler. But even on these difficult nights, even on this miserable couch from the 1970s, I only achieve lucidity once, briefly. I dream that my grandfather and I are seated at his favourite booth at his favourite lunch spot, unmasked and healthy. He smiles, and though I know I am dreaming, that this perfect moment must be impossible, I smile back. – New York Times