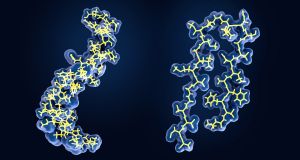 Structure of the amyloid beta peptide bound to the cell membrane. Scientists at Washington University reported that they had devised the most sensitive blood test yet. Photograph: Getty Images/iStockphoto

For decades, researchers have sought a blood test for beta amyloid, the protein that is a hallmark of Alzheimer’s disease. Several groups and companies have made progress, and this month, scientists at Washington University in St Louis reported that they had devised the most sensitive blood test yet.

The test will not be available for clinical use for years, and in any event, amyloid is not a perfect predictor of Alzheimer’s disease: most symptomless older people with amyloid deposits in their brains will not develop dementia.

But the protein is a significant risk factor, and the new blood test identified patients with amyloid deposits before brain scans did. That will be important to scientists conducting trials of drugs to prevent Alzheimer’s. They need to find participants in the earliest stages of the disease.

At present, a diagnosis of Alzheimer’s disease is not easy to make. Doctors rely mostly on tests of mental acuity and interviews with the patient and family members. Studies have shown that community doctors are only 50 per cent to 60 per cent accurate in diagnosing the condition – about the same as tossing a coin.

Methods that can improve accuracy, like PET scans of the brain, are expensive and often not available.

The new test relies on mass spectrometry, a tool used in analytical chemistry that, with recent technical advances, can find elusive beta amyloid molecules in blood with high precision. The lead investigator, Dr Randall Bateman, a neurologist at Washington University, has been working on a mass spectrometry test for 20 years. He and a colleague, Dr David Holtzman, founded a company 10 years ago and licensed patents from their university to commercialise a mass spectrometry test if they ever developed one.

Amyloid is a normal brain protein, formed from the breakdown of a much bigger protein. No one knows what its function is. “We don’t know if it has a function,” said Dr Suzanne Schindler, a neurologist and first author of the new paper. “It might just be a piece of trash.”

The idea behind the blood test is somewhat paradoxical: if blood amyloid levels are very low, the patient may well have plaques in the brain. The reason, Schindler said, is that amyloid is “sticky”. As it gets trapped in clumps in the brain, levels dip in the blood.

The new study involved 158 volunteers mostly in their 60s and 70s. Most were cognitively normal. They came periodically for tests of memory and reasoning and received spinal taps and brain scans.

Schindler and her colleagues used mass spectrometry to test the volunteers’ stored blood for beta amyloid. Then they asked if the beta amyloid levels predicted the results of PET scans that the participants received over the years.

The researchers combined the blood test results with other factors known to influence the risk of Alzheimer’s disease – age, and the presence or absence of a gene variant, ApoE4 – and found the blood test was 94 per cent accurate in predicting the presence of plaques even in mostly asymptomatic people.

There is no treatment for Alzheimer’s, and very early diagnosis of any disease can be problematic, since it may not progress. So the first use for this blood test will probably be to screen people for clinical trials of drugs to prevent Alzheimer’s disease, said Dr Michael Weiner, a neurologist at the University of California, San Francisco. “If you are doing a prevention trial, you are looking for evidence of the disease that is silent,” he said.

About a quarter of people in their mid-70s are starting to accumulate amyloid in plaques in their brains, but their memories and reasoning abilities are intact. To identify patients for prevention trials, researchers have to perform a lot of PET scans at a big cost, Weiner said. A simple blood test would cost much less. “It’s fantastic,” he said.

How to develop the skill of lucid dreaming