The Cedar Tree review: Feels as old as the hills. That’s no bad thing 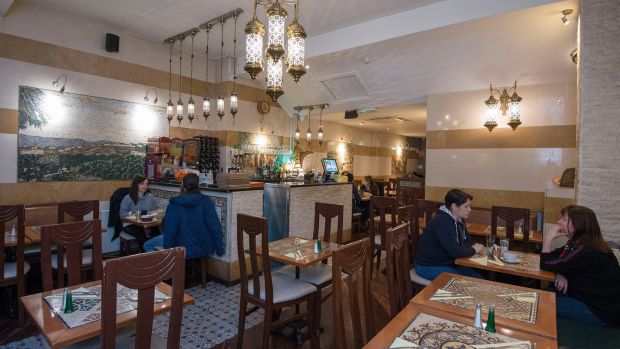 My friend’s friend cooks on Sundays for the week ahead. She is relatively lucky. Her direct provision centre has a kitchen. She makes chapatis, sometimes spring rolls. Lots of biryani. On work days she gets up before 4am to take her medication and have time for the long walk to the bus. “First impressions are last impressions,” she always says. So she is never late. Some mornings she arrives before her supervisor, with plenty of time to change into her uniform.

She likes drawing a heart in the froth for the coffee customers, busy people on their own journeys. She perfected it during her barista training. She likes to think the hearts make people happy. On good days when her own heart is feeling good the milk hearts turn out well. On bad days they can look a little wonky.

We are chatting in the Cedar Tree in Dublin’s Andrew St. It’s the kind of restaurant that’s becoming as rare as hen’s teeth in this food quarter of the south city centre. It’s not a chain or a cocktail bar with food on the side and prices aren’t eye watering. The Cedar Tree is a Lebanese restaurant, serves halal food and by the look of the busy tables around us, specialises in family feasts.

We’re down the back where a large skylight brings plenty of light, all be it watery grey winter light. It’s decorated with scenes from a warmer place. Across from us there’s a wall mosaic of a Lebanese village with the leaves of an olive tree in the foreground. You can almost hear the hum of heat and insects from it. The cloakroom is decked out like a village house, with roof tiles. Tables are also mosaiced and there are souk style brass lamps hanging from the ceiling. On Saturday nights there is belly dancing.

Middle Eastern food got posher in the last decade and staples like hummus and falafel are everywhere, often as the virtuous vegetarian offering separate from anything with a face. This is not how they always feature in their countries of origin. Meat consumption tracks income levels consistently across countries and economic fortunes. In poorer countries meat is often served alongside other forms of protein to make things go further. The flexitarian diet often involves not an either/or but a both.

So it is with our shared mezze platter. There’s creamy hummus here, swirled and finished with some chilli oil. In the middle we get a small bowl of tabbouleh, that Lebanese salad that often gets westernised with too much wheat and not enough herbs. Here it’s almost entirely green, chopped fresh parsley and coriander finished with citrus and the bulgur wheat is used so sparingly it’s almost like a seasoning rather than a full element of the dish. It’s served with lettuce leaves for scooping and goes excellently with the chicken part of the plate. It’s chicken kafta brown thigh and wing meat formed into a long irregular shaped sausage and drizzled in tahini mayonnaise. There are crisply spiced potato cubes here too and a crisp finger-sized spring roll or sambousek stuffed with creamy and mild cheese. What we have here is the best kind of chicken and chips with all the trimmings.

We do more chicken for mains with a generously portioned shawarma featuring more marinated brown meat shredded on to a flatbread and topped with tahini yoghurt. A spiced chicken kafta is good with just the right amount of chilli heat and falafel on the third “main” are nutty and tasty. The only let down is a tomato salad where the tomatoes taste old. But then the only tomato that tastes good in January in northern Europe is a roasted one.

We finish with a plate of “assorted baklawa straight from The Lebanon”. These are chewy lozenges of filo pastry and sweetened nuts, pistachios and walnuts. The emphasis is nutty rather than tooth-achingly sweet and they combine well to end the feast with mint tea served in small tall glass cups.

My friend’s friend will celebrate her 30th birthday this year and in many ways her life in Ireland is good. The Cedar Tree has had roots on Andrew Street for 33 years. It’s the kind of place that can probably rise above the mania of the market thanks to its old lady status. These walls hold a long tradition of providing reasonably priced Middle Eastern cooking without a single pomegranate being bothered in the process. It feels as old as the hills depicted in its mosaics where little has changed over the years. And these days that feels like no bad thing.

Lunch for three with sparkling water, shared dessert, tea and coffee came to €75.25

‘It just took an angry menopausal woman to get something done’