The pre-wedding workout: ‘I have never felt such pressure’

There is an industry focused on how to be a ‘ride bride’. Dominique McMullan is resisting 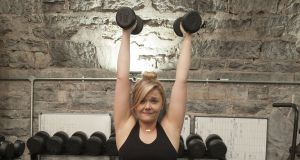 Dominique McMullan: On our wedding day I want to be able to focus on my friends and family, and not keep thinking about what my body looks like from every angle. Photograph: Dave Meehan

Once you dip your toe into “bride world” you are bombarded with messages that tell you that you’re not good enough. “There’s always room for bridey improvement,” scream the glossy peach-coloured pinterest pages. Have you thought about teeth whitening? It makes a big difference for the photos. You’ll want flat abs on your honeymoon, of course. If you eat 12 almonds a day for the next two months your hair might just be glossy enough. What? You haven’t been getting regular facials?!

As women we’re used to the media’s attempts to mould us all into Victoria’s Secret bots. In fact most of us hardly notice it anymore, such is the messaging’s omnipresence. But “bride world” is where this VS messaging goes into hyper-drive.

Never before have I felt pressure like this, based entirely on my appearance.

Louise McSharry recently wrote a piece about why she chose not to lose weight for her wedding day. She said that she found women being urged to shrink down for the big day “sinister and unnecessary”. I couldn’t agree more.

Never before have I felt pressure like this, based entirely on my appearance. In other areas of the media it feels like the fight against the objectification of women is making some progress, but not in bride world.

There are whole industries focused on “shedding for the wedding” and how to be a “ride bride”. They are just other not so veiled (pardon the pun) ways in which women are controlled and encouraged to compete with one another.

I was always pushing myself for two or three more pounds. It never made me happy. Now it’s different

I won’t lie, I want to “be the best version of myself” when I marry Rory. I want to feel good in my wedding dress. But more than that, I want to be happy. I’ve lost weight before, and the more weight I lost, the more focused I was on losing weight.

I never got to a point where I thought, “Yes, this is my perfect weight, I’d like to remain exactly as I am”. I was always pushing myself for two or three more pounds. It never made me happy. Now it’s different.

On our wedding day I want to be able to focus on my friends and family, and not keep thinking about what my body looks like from every angle. The gaze is not invited to our wedding.

I’m moving away from obsessing about what other people think of my body. Instead I am moving inwards, concentrating on what my body feels like to me.

I’m back from a week in Australia, the land of the beautiful people, and while I worked out most days and ate well, there were also a few glasses of wine and one or two kangaroo burgers. We were on holidays and how could I say no? My trainer John Belton hasn’t gone easy on me since my return, and that, combined with jet leg, has made for a tough week.

Working out though seems to be helping. Yesterday, I used something called a prowler (minds out of the gutter, please). A prowler is a big weight on a platform raised just above the floor, with two big sticks coming out of it. It’s also a torture device.

I pushed the prowler up and down the room until I thought my body was going to give up. The exhaustion crept up on me slowly, I repeated the exercise five times and each time, about halfway up the room, I thought “okay this isn’t that bad”. Then I would stop for a 30-second break and my chest and legs would ignite.

The last time I remember feeling that was in school PE and then, that sensation would make me feel panicked. I hated not being able to breathe and felt totally out of control, and frightened. Instead of relaying my fears, my PE teachers would tell me to get a move on.

This time it’s different. Belton knows what he’s doing, and I trust him not to push me further than what I am capable of. Letting go and trusting him means that I can actually concentrate on my body. I can’t tell you how freeing this is. I manage every single repetition, and feel like I’ve won gold in the Olympics.

I’ve always been under the impression that fit, athletic people enjoy exercise, and that’s why they do it. Belton spoke to me this week about the theory of “want, can, do”. It’s widely believed that fitness people want to exercise, and so they can, and this means they do.

If you just get up and do the exercise, after a few times you’ll get better and then find you can, and it’s only then, when you have a little practice, that you want

Belton tells me that this is all wrong, if fact it’s exactly the opposite. Fitness type people, just like everyone else, don’t always want to exercise. They don’t have some mythical gene that precludes them from feeling uncomfortable when they are out of breath and sweating up a storm. They don’t always want to exercise. The difference is that they just do it.

How many times have you heard someone say, “Yes but you love that type of thing, and you’re so good at it. I’m just not the athletic type”? Fitness people don’t live by want, can, do, instead they live by do, can, want’. If you just get up and do the exercise, after a few times you’ll get better and then find you can, and it’s only then, when you have a little practice, that you want.

All of this amounts to me saying, just go to the gym guys. That’s how it starts. And if I can do it, I swear you can too.