Living with IBD and an ileostomy bag: ‘Tough times don’t last but tough people do’ 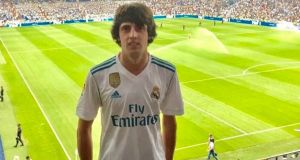 Andrew Browne: ‘You have to be very tough but I have found that being as fit as I possibly can both mentally and physically is something which helps my condition and being a professional golfer, I am quite fit, which is definitely a help’

As far as minor ailments go, few things are more uncomfortable than a stomach bug and this is what Andrew Browne thought he had five years ago when he first experienced symptoms.

But, before long, the classic signs turned into something more sinister and he visited his local hospital to get checked out.

“I first noticed something was wrong in 2014 when I had extremely bad diarrhoea which eventually turned to blood,” says the 23-year-old. “I was going to the toilet five times an hour; I had no appetite, wasn’t sleeping and had no energy at all.

“Initially, I didn’t want anyone to know as I was 18 and just like any other teenager [felt embarrassed]. I thought it was some sort of bug which I could fight off and it would eventually go away but it didn’t. I left it for about five weeks and when I began vomiting I went to A&E. I was told to come back a few days later for a colonoscopy and it was then that I was diagnosed with IBD (Irritable Bowel Disease).”

A few weeks later, the Dublin man was given an official diagnosis of ulcerative colitis, which was a devastating blow and although he tried to return to a normal life, the symptoms refused to go away and in fact began to get worse. “I didn’t take my official diagnosis well at all,” he admits. “At first, I was really upset and there were tears. Then I went through a period of denial and just couldn’t come to terms with having the disease – then I became very angry with myself which I now realise was wrong.

“I was put on medication in early 2015 which kept my condition under control until August. Then I started to have really bad diarrhoea which turned to blood again and every time I would eat or drink something I would vomit straight away. I was even worse than I had been before my diagnosis.

“The doctors tried everything to make me better, but, unfortunately, nothing worked and time was running out for me. I went from weighing nine stone on the day I was admitted to weighing five stone just 10 days later. At that stage I was really struggling to do anything. I was going to the toilet six times an hour which was nothing but blood. I could barely make it there and back to my bed and I hardly had the energy to talk.”

Andrew, who is a professional golfer, underwent another colonoscopy which was swiftly followed with emergency surgery. This was a success, but it also meant that his life was about to change forever.

“After the colonoscopy I was told that I needed emergency surgery or I would die in the next two hours,” he says. “I was rushed down to surgery and woke up in the middle of the night in a very dark room where I couldn’t see anything. My first thought was that I was dead but a nurse appeared so I asked her and she said I was alive – it was such a relief.

“I spent three days in HDU /[High Dependency Unit/] then I had to learn how to walk again – the first time I tried I needed four people to help me. I also had to learn how to manage, change and take care of my ileostomy bag (which would be a permanent fixture). This was the hardest part as I couldn’t even look at my ileostomy bag or my stomach until ten days after my surgery. I was still in denial that I had the surgery and that I would have to live the rest of my life with a bag on my stomach.

"Then in March 2016 my ileostomy bag stopped working and everything that was meant to go out through the bag was coming out through my mouth. Yes it was as bad as it sounds. I was admitted to hospital again and the only option to fix my bag was to have another surgery which revealed that I also have Crohn’s Disease.”

Andrew was given medication to treat the Crohn’s Disease (which he is still on today) and in September 2017, he had more surgery due to a hernia bursting on the side of the stoma, which once again caused the bag to stop working necessitating his third operation in two years.

He is currently trying to get on with living his life as normally as possible but it is far from easy. “The day to day management and upkeep of the bag isn’t that difficult once you get used to it, even though at first it is really difficult because you have to find your own way of doing it,” he says. “I have perfected my own method over the years and it works great for me. But it’s the side effects of the surgeries and both IBD diseases which make my life so difficult.

“I suffer from really bad headaches, chronic fatigue, memory loss, lack of concentration, disturbed sleep, unexplained muscle pain, extreme exhaustion and transient pain. I would also suffer from flare ups of Crohn’s disease and mentally it is very draining to have two IBD diseases and an ileostomy bag.

“You have to be very tough but I have found that being as fit as I possibly can both mentally and physically is something which helps my condition and being a professional golfer, I am quite fit, which is definitely a help.”

Andrew says the mental and emotional challenge is also hard but he gets through it by trying to be positive and would encourage others in the same position to do the same.

“You have to be as positive as you can – I know it’s impossible to be like that all the time and I do have a lot of bad days so I just have to power through them,” he says. “These bad days make you stronger. But people like me who have IBD and an ileostomy bag are not being treated the way we should and don’t get the respect we deserve.

"This is why IBD is known as an invisible disease and it amazes me that they are not on the long term illness list in this country – there is no cure, so they should be. Always remember the way a person looks isn’t an indicator of health so try to be kind always.

“And I would advise anyone going through this to make friends with their stoma nurses as they will need them all the time. Get to know as many people with the condition as possible. There is a great community on Instagram – if anyone wants my help I’m andyb.96 and my door is always open to help people.

“I would love to say it’s all rainbows and butterflies after surgery but it isn’t – it only gets harder as having IBD and an ileostomy bag changes your life forever and challenges you mentally every day. But everyone who has a bag would be dead without it so you just have to take the good with the bad.

"Tough times don’t last but tough people do – look at me, I’m now a professional golfer, something I thought was going to pass me by when I got my bag. But I got there in the end – proof that you can do anything if you put your mind to it.”

Covid-19: Those planning to visit older relatives at Christmas ‘should stop socialising now’