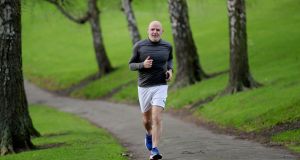 I was a bit smug when I started my running adventure just over three months ago. I figured I’d get to 10km in a few days and be able to spend the following six weeks or so lounging about on my couch watching Modern Family and telling people how amazing I was.

I was wrong on all sorts of levels.

It took me almost two months of ponderous plodding to get to the magic 10km mark that had been my goal at the start of the enterprise, and I was in bits by the end of that first really long run.

Weather and laziness combined to halt my progress for a spell and then, after a week or two running indoors, I left my house this day last week and set off on what I was determined would be another 10km run.

My knees started complaining. “You’re just too old for this crap,” they said

As well as covering that distance, I wanted to run it in less than an hour. It was a modest ambition I thought. At the start of this exercise my aim was to run 10km in less than 50 minutes but I quickly realised how hard that would be so was forced to recalibrate my expectations.

Having smashed my Apple Watch with a kettlebell days earlier – it’s a long and incredibly stupid story – I had to rely on the Runkeeper app to measure my progress. With every second counting, I made it wait 15 seconds after I hit the start button before it started shouting at me.

The 15-second countdown gave me valuable moments to trip over a buggy in my hall, get out of my front door, fiddle with my phone to get the playlist up, swear to myself about how cold it was and start running.

“Every second is going to count,” I told myself as I set off at a fair old clip, having also reset the app to keep me up to speed on my progress at much more regular intervals than in the past.

I was barely 50m into the run when my heel started to give out. Refusing to let my actual Achilles heel be my metaphorical one, I kept running.

The heel stopped hurting after about a kilometre, after which my knees started complaining. “You’re just too old for this crap,” they said.

I ignored them and kept running.

Worryingly, I also ignored traffic and – showing a flagrant disregard for the Safe Cross Code – I neither stopped nor waited nor even looked for a safe place before I ran across the North Circular Road almost under the wheels of a Tesco delivery van.

The shouting of the delivery man was drowned out by the shouty man in my running app, who told me I had covered the first kilometre in 5:30.

I started to worry. I thought I was going like the clappers – and didn’t I nearly give the Tesco van driver a heart attack with my surprise appearance in front of his van? But if my pace was that slow over the first kilometre, how slow was I going to be over the last one?

The plan had been to start fast and maintain that sort pace of the first 5km to give me the chance to ease off a little bit for the second half of my race against myself.

I tried to play games to increase my speed. I sprinted from this tree to that tree – well, sprinted may be an exaggeration – before slowing to a crawl for another couple of trees. That didn’t make any difference. Every few minutes the shouty man updated me. I was slowing down, not terribly, but with half the distance covered I was running each kilometre in an average of 5:45.

Then something strange happened. Rather than slowing down, I actually started running faster as the run went on. I was delighted to reach the 9km mark with just under eight minutes to spare.

The hill nearly stopped me. It nearly killed me in fact. But I made it up and when I hit the 10km mark I checked my time

“Nothing can stop me now,” I thought as I started up the last hill of the run, in the People’s Park.

The hill nearly stopped me. It nearly killed me in fact. But I made it up and when I hit the 10km mark I checked my time.

Only delighted, I fell through my front door convinced that running a marathon would be no bother to me.