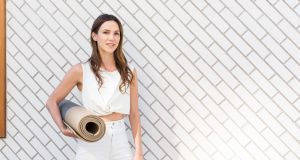 Adriene Mishler: “When people have fun and have an experience where they’re like, ‘I did okay’ as opposed to ‘I suck, I’m bad at yoga’, then they’re going to come back and do it again and keep it up’

“It’s always been my intention to create yoga for people who perhaps need it the most but perceive it the least,” says Adriene Mishler. “People who are not already doing yoga.”

It’s six years since Mishler, a yoga teacher and actor from Austin, Texas, teamed up with her business partner Chris Sharpe to create a YouTube channel offering yoga videos. Yoga With Adriene now has more than four million subscribers. As well as the basic foundations of yoga, there are hundreds of free videos varying in length from five minutes to 60, devoted to everything from the obvious (“Yoga for Anxiety”) to the original (“Yoga for the Service Industry”).

Subscribers can access extra content for a monthly fee, but Mishler puts up a free video every week. Her motto is “find what feels good”, and she stresses that everyone can find the level that works for them.

“On Yoga with Adriene it’s always no person – or pet – left behind. [That’s] the heartbeat of what makes our community unique,” she says. “If you look in the [YWA] community, you’re not going to find a bunch of people who look the same or are from the same area or are the same age or body type. You see the diversity that you should see in yoga, and it brings a sense of unity and equality to the whole practice that makes you feel good, like we’re all in this together. And I think that’s a lot more motivating most days than a hard tummy and yoga booty.”

The first time I tried one of Mishler’s videos, I was sceptical. I had tried many yoga classes over the years, and found them difficult, intimidating and boring. But I was captivated and, 18 months later, I now do yoga at home every day and genuinely love it.

Turns out it’s hard to be sceptical when you can touch your toes comfortably for the first time in your life.

So what makes her videos so appealing? “It’s completely free, and sometimes her dog is there,” says Aoife Moore, who works for an NGO and who recently flew to London to take part in Mishler’s Alexandra Palace workshop, part of YWA’s Find What Feels Good 2018 roadshow. “Okay, full answer: her tone is so encouraging, and it’s never about perfection.”

“It’s hard to pinpoint what it is that makes her so charming, but she is magnetic,” says crime novelist Jane Casey, who, like me, had never enjoyed yoga until she tried Mishler’s videos. “Her manner is so sincere and warm. She never seems to show off – in fact, quite the opposite as she explains how hard certain moves can be for her, or how uncertain she can feel about herself. She goes to great lengths to suggest that what she does might be possible for everyone and anyone.”

Mishler regularly responds to requests from viewers. “I think it’s a great way not just to bring people in but of reminding people that you are not alone.”

In other words, if you need a yoga practice to help you with a certain issue, chances are thousands of others around the world are in the same boat.

It can, of course, be difficult to fit yoga into a busy day.“I used to go to yoga class once a week, pay money, and feel lost at the back of a large class,” says Dublin-based academic Emily Jones. “And then, of course, there are all the times I meant to go to a class but was running late, or busy, and so never made it. Before discovering Adriene I had no at home practice, and I assumed I never would.”

Now, she says, she practises at least four times a week, “as opposed to once or never. And I rely on her ‘bedtime yoga’ sequences to help me wind down.”

While Mishler takes her yoga practice seriously, there’s nothing po-faced about her approach. “I enjoy the moments of goofiness and humour in her directions,” says Aoife Moore. “I’m doing downward dog in my PJs because a woman in Texas told me to – this is no time for solemnity.”

This wry playfulness is part of Mishler’s mission to make yoga accessible and enjoyable. “I like to use humour as a way to lovingly and gently coax and coerce the community to really be in the moment and be loving and be kind,” she says.

“It’s one thing to say ‘be kind to yourself’, but how do we do that? I like to use humour – sometimes bad humour, I know – to lovingly guide that experience. And when people have fun and have an experience where they’re like, ‘I did okay’ as opposed to ‘I suck, I’m bad at yoga’, then they’re going to come back and do it again and keep it up.”

There are plenty of fitness videos and apps out there, but when exercising without supervision, you have to be careful. Physiotherapist Stephanie Crossland of Milltown Physiotherapy in Dublin stresses that when exercising at home, “nothing should be painful. It should only feel like a comfortable stretch.

“And when you come out of the movement, that stretch feeling should be gone. Only progress when you feel comfortable – don’t push on to something just because it’s the next level. It’s about listening to your body.”

When I told friends I was interviewing Mishler, these sensible women in their 30s and 40s turned into swooning fangirls. Is Mishler ever freaked out by the huge following? “I promise I’d tell you the truth if it was kind of weird, but it’s not, for me,” she says. “That could change, but I dunno, I’ve been on the road a bit [recently] and everything’s magnified and turned on and still, I’m just truly honoured . . . I feel a little emotional when I think about it because it’s a great honour to be trusted and to be welcomed into so many people’s homes.”

A few days after talking to Mishler, I flew to London to take part in her workshop in the beautiful Nash Conservatory in Kew Gardens. About 100 people, the overwhelming majority of them women of all ages and sizes, rolled out their yoga mats in the warm, dimly lit space. For well over an hour gentle music played in the background as Mishler took us through a sequence of poses.

Then, towards the end, she said, “You know this next one,” and the finger-picked guitar line that begins almost every Yoga with Adriene video kicked in. As the familiar music played, we moved together, all of us stretching and breathing as best as we could, finding what feels good.

Sign up for one of The Irish Times' Get Running programmes (it is free!).
First, pick the programme that suits you.
- Beginner Course: An eight-week course that will take you from inactivity to running for 30 minutes.
- Stay On Track: For those who can squeeze in a run a few times a week.
- 10km Course: Designed for those who want to move up to the 10km mark.
Best of luck!

Muiris Houston: A general election is a chance for us to say to politicians ‘enough is enough’

Being a Carer: Lynn McDonald on the challenges when your child has a life-limiting condition

The five ‘hidden’ reasons that stopped me losing weight
10