Fighting arts: Tell me about . . . Kickboxing 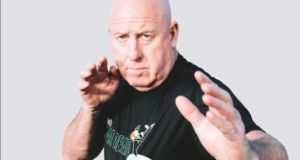 Total Kickboxing chief instructor master Liam Whelan, who has been involved in the sport since the 1980s

Liam Whelan is the chief instructor at Total Kickboxing in Sandyford, Dublin, and has been involved in martial arts since he was 12 years old. Having started kickboxing in the 1980s, he has held many board positions and is currently the Irish president for the World Organisation of Martial Arts Athletes.

Where does kickboxing originate?

Kickboxing originated in Japan in the late 1950s. It was started and further developed in America in the early 1970s, and that’s where the first world championships were held in 1974. The Americans developed the sport more and more and it came to Europe, and Ireland, in the 1980s and that is when I got involved.

The main governing body for kickboxing is called WAKO – the World Association of Kickboxing Organisations – who achieved Olympic recognition in November of 2018.

What is the main focus of kickboxing?

Kickboxing is a stand-up combat sport based on kicking and punching and other strikes. There is a lot of styles, for example, points fighting, there wouldn’t be a lot of contact in that, light contact or then you’d have full-contact fighting which would be using full power so you’d be trying to inflict as much damage on your opponent, this would be in competition obviously. You’re not allowed to throw or take people to the ground. Its not like MMA – it’s very controlled.

There is a non-combat aspect to it so people might just kick shields or punch bags, hit pads and do every aspect of kickboxing except the combat part of it.

It’s a vast sport, there are so many different styles inside it. To pick one move out of the lot would be very hard, I am more full contact orientated so I would probably go with the turn kick, everyone has their own trademark.

You will get people in points fighting that throw a side kick, they stand on that one leg and kick that side kick out multiple times, it’s very controlled.

Kickboxing belts can differ by country and school, in most cases there are nine belts. The belts go from orange to green, blue, purple, red, first brown, second brown and third brown to black belt. There are seven gaps in between the belts for students to progress to the next stage and there would be a syllabus that the instructor would use of certain disciplines and drills and movements that the students would have to learn off and perfect. Notes are usually taken as they go along; they have a grading system as such.

There’s a lot of different competitions held nearly every week all around Ireland and then you have your National, European and World championships.

Ireland would be up in the top five, they are very highly ranked for such a small country.

Kickboxing Ireland is the governing body for kickboxing in Ireland, it covers the whole of Ireland and is recognised by the Irish Sports Council as such. And of course myself at Total Kickboxing in Sandyford, Dublin.

Anyone that takes up the sport of kickboxing will benefit from it, all types of people, young and old, male and female. Kickboxing develops strength and stamina, flexibility, co-ordination balance, confidence, suppleness, awareness and of course discipline. It also develops aerobic and anaerobic conditioning building a great fitness level, reducing stress and improving your posture.

It makes a stronger, faster, better you in general.

Most people are put off by the name kickboxing but when they come and they try it they can see you don’t have to do the combat, everything is optional to the student.

Kickboxing is like any other sport out there: there is a risk of injury but because there are so many aspects of the sport to do. As I mentioned before you can opt to do non-combat work or shadow sparring. Once you start off slowly into it, listen to the instructor and get some proper equipment, there is very little risk of injury. There is safety equipment; you’ve got head protection, gloves, hand wraps, mouth guards, groin guards and pads for your shins and feet.

Touch wood I haven’t had any injuries in my club at all that has happened in the club as such because we have a good range of black belts there to look after the students. We’ve had people in there 80s and at the moment we have people in there 60s right down the age groups, male and female, to 13- and 14-year-olds.