When children grow up: the hardest change of all

I found myself kept awake, not by a baby in her bed, but by an adult daughter who wasn’t 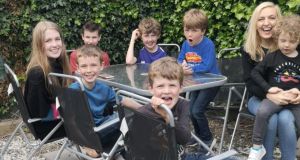 Jen and her children.

I hate change. I’ve always been a creature of habit who revels in the familiar and finds comfort in what she knows best. So when parenthood came knocking, I was blown out of the water.

The surrender of my sleep, the overwhelming responsibility, and a baby who cried almost as much as I did and who pooped so much that I should have considered going into the fertiliser business, was enough to send me into turmoil and wonder what on earth had possessed me to upset the apple cart of my previous comfort zone.

But apparently that’s just new parenthood for you. I just needed to weather the storm. All was going to improve when baby was six weeks old, I was told. I figured my neighbour’s mother, who assured me as she admired my squawking newborn that “this is the easiest time” just hadn’t got that memo. What did she really know after all – she’d only raised a family.

“I think she’s bored,” I told my GP, believing there had to be a reason my newborn baby remained so unsettled and sleep resistant. I could relate – I didn’t do boredom either.

The magic six-week mark arrived and little changed. Washing became a luxury and getting out of the house a feat of mountainous proportions. I feared I would never adjust to this new life.

And yet somehow I did. Without even realising, parenthood became my new norm. I learned to check the toilets for missing home phones and remote controls - finding breakfast waffles floating alongside them in the toilet bowl didn’t even surprise me.

I mastered the art of showering at break-neck speed. And debating with small children about the validity and necessity of underwear became a standard part of my day.

And I realised, many newborns later, that there was actually an element of truth in what my neighbour’s mother claimed. Exhaustion, hormones and initial shock aside, there is great comfort in knowing your baby stays exactly where you put them.

The transformation to toddlers and the dawning realisation they have opinions (usually contrary to yours) and they’re not afraid to use them, became less of a “brace yourself” experience as I appreciated that every stage was a passing phase.

And there were times in the post toddler-dom era but ahead of the pre-teen period, that life was somewhat tranquil – or at least it would have been had there not been other child-shaped minions of every age and stage still running around causing chaos.

I had found my comfort zone, and was happy in my new familiar.

But then that part I hadn’t quite prepared myself for came around – my eldest went on a post Leaving Cert holiday to Magaluf.

It had been topic non-grata in our house all year. Any attempts to discuss it were generally shut down in the manner you might expect from a mature and worried parent – by putting my fingers in my ears, glaring furiously and singing la-la-la.

I didn’t want my baby girl to go to a place famed for excess and debauchery, a place where I couldn’t protect her and where I feared something terrible might happen. But the problem was, my baby girl turned 18 the week before she was due to go. Officially, I was the parent of an adult – and apparently that means I have to let go a little bit, whether I want to or not.

“Trust all that you’ve taught her and the mature girl that she is,” others offered in attempts to allay my fears – fears anyone who even deigned to exchange fleeting niceties heard all about. I resolved to teach her more in the days leading up to her departure.

She could barely contain her excitement as she waved us goodbye. I aged ten years and spent the week in a similar sleep-deprived state to that of her early years. Kept awake not by a baby in her bed, but by an adult daughter who wasn’t.

As parents we need to continuously evolve and adapt. Changing, bending and remaining resolute as different personalities, challenges and stages demand. And I’m finding this newest stage the hardest.

Just as you get comfortable, things change. I hate change.

The boys missed their sister hugely while she was away. After a late arrival, she was woken early the next morning by excited youngest siblings who bounded into her room and onto her bed keen to show her pictures they had drawn to welcome her home. As they hugged each other and chatted – she, equally thrilled to see them – I smiled.

They’d all be back to killing each other the next day, as only siblings can.

Because some things never change.