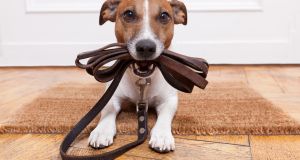 Most people who live with dogs are familiar with their joy at ambling along paths, trails and sidewalks. We also have to deal with their jowly dejection when our work deadlines or other issues interfere with walks

Dog owners are about four times more likely than other people to meet today’s physical activity guidelines, according to a large new study of dogs and exercise.

The study, which involved hundreds of British households, suggests that having a dog can strongly influence how much people exercise. Yet it also raises questions about why some dog owners never walk their pets or otherwise work out, and whether any of us should acquire a dog just to encourage us to move.

Most people who live with dogs, including me, are familiar with their joy at ambling along paths, trails and sidewalks. We also have to deal with their jowly dejection when our work deadlines or other issues interfere with walks.

Few of us would be surprised that past studies have found links between dog ownership and frequent walking. But many of those studies have been small and relied solely on people’s sometimes unreliable recall of their exercise routines.

They also have not looked at whether walking a dog might displace other kinds of physical activity, which would mean that dog owners were not exercising more in total than other people; only that they were exercising more often with a dog.

Those issues prompted exercise scientists from the University of Liverpool and other institutions to undertake one of the most comprehensive comparisons yet of how often, whether and in what ways dog owners and their dog-less neighbours exercise.

So for the new study, published recently in Scientific Reports, they first turned to a neighbourhood near Liverpool, and began asking families in the area about their lives and pets. The researchers focused on a single community so that everyone involved should share approximately the same local environment, with similar access to sidewalks, parks or other amenities that might influence their exercise routines.

They wound up with almost 700 participants from 385 neighbouring households, half of them women and most middle-aged, although about 70 children also participated. About a third of these people owned a dog.

The scientists asked everyone in these households, including the children, to complete lengthy questionnaires about how much and in what ways they moved each week. They also provided activity monitors to a few of the families and asked the members to wear them for a week while exercising as usual. Then they collected and compared data.

It was immediately apparent that people who owned dogs walked far more often than those without dogs, said Carri Westgarth, a lecturer in human-animal interaction at the University of Liverpool, who led the new study.

In general, according to both the questionnaires and activity monitors most dog owners spent close to 300 minutes each week walking with their dogs, which was about 200 more minutes of walking per week than people without dogs.

Due primarily to these walks, most dog owners met or exceeded the standard guidelines for exercising for health which call for at least 150 minutes of moderate exercise every week.

More unexpected, dog owners also spent slightly more time than other people jogging, cycling and visiting the gym solo, without their dogs, indicating that walking Fido had not bumped other activities from their lives.

The influence of dogs extended also to the young, the scientists found. Children whose families owned dogs walked for about 100 minutes each week, and played and romped with their pets for another 200 minutes, making them substantially more active than children in homes without dogs.

At the same time, though, and to the puzzlement of the researchers, a small portion of dog owners never walked their dogs, and those owners almost all were young, healthy and female.

Taken as a whole the results suggest that people with dogs are more physically active than those without, Westgarth said. But the findings also show that dog owners can remain sedentary and their reasons should be investigated.

She said the women in this study who did not walk their pets might have worried about controlling their animals or their safety on the streets, or they might simply have disliked walking. Such concerns needed to be acknowledged, understood and addressed if having a dog is to be promoted as a way of increasing exercise.

Of course, this kind of observational study cannot tell us whether dog ownership actually causes people to move more or if active people also own dogs. The study also did not account for differences in pets’ sizes, breeds, temperament or training, and whether those affect owners’ willingness to walk, although the researchers plan to look at those issues in future studies.

For now, Westgarth said, she would not advise anyone to buy a dog only in hopes that, like a furry Fitbit, it will prod us to move.

“A dog is not a tool just to make us more physically active. But if you feel that you have the time, inclination and finances to take on the responsibility of having a dog, they are a great motivator to get out walking when you otherwise would have made excuses not to.” – New York Times