Conor Pope: Time versus distance is tricky when you have Cabra flu

After my first attempt to run without a warm-up routine, I was laid low for days 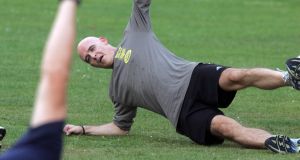 My nose has been better at running than my legs in recent days. My contraction of an absolutely horrendous flu from Japan or Australia or Cabra has set me right back and entirely derailed my efforts to get to an easy 10km before the end of January.

At least, that is what I tell myself.

Even though I know in my heart that what the illness has actually done is hand me the perfect excuse to ignore my running man commitments and stay indoors listening instead to the rhythm of the pouring rain drumming on my windows.

It is probably for the best. After my first, entirely stupid, attempt to run without even a nod to warm-up routines or doable distances I was laid low for days by aching limbs – even my back was sore, for some inexplicable reason.

So the flu – okay, okay it was just a mild head cold – allowed my body time to get over itself.

When the time for my second run comes, I set off gingerly – but only after doing a series of ridiculous stretches in my livingroom much to the delight of my children who are far too young and far too limber to need to bother with serious stretches.

The other big change is that this time, rather than simply running in one direction until I am flaked and then running back in the direction from whence I came until the screams of protestation from my legs and lungs make my head hurt, I know what I am doing. And I have planned a route and resolved to run for no longer than 30 minutes at a slow and steady pace.

And that is what I do.

Exactly 30 minutes after I start, I stop – drenched in sweat and delighted with myself. I have covered just under 5km in my allotted time – it took the iron will of Bismarck not to run around the block a couple of times to get the 247 metres I needed to make it to the magic 5km. The time is not fast but it is steady and that was the goal.

Two days later, I am back in the park after even more ridiculous stretches which, incidentally, I have only half remembered from the five-a-side football warm-up routines from my youth. I have no idea if they have any function other than to make my children laugh, but the pain I felt after run number one was notable by its absence after run number two so they must have done something.

I have decide to add five minutes to my run. And again, I show tremendous resolve and stop as soon as my watch tells me I have done my 35 minutes. I look excitedly at my distance – convinced that I have smashed through the 5km barrier. “I may even have touched 6K,” I tell myself.

My watch tells me different.

I have, in fact, run 4.5km, which is 253 metres less than I managed last time. And I took five minutes longer to do it.

I am – obviously – despondent.

I blame the Cabra flu.