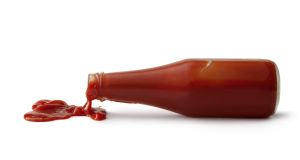 Dr Archibald Miles’ Compound Extract of Tomato is now better known as ketchup. It’s great with chips it will not cure your biliousness

For hundreds, if not thousands, of years people have been desperate to work out what makes them ill so they can work out ways to stop it happening. But given that most of those trying to work out the root cause of illness had absolutely nothing by way of training and very little by way of equipment, the poor unfortunates of yesteryear who fell ill had to content themselves with random amputations, vigorous bleeding, leeches, purges and high doses of toxic medicines that, generally speaking, had death as a somewhat unfortunate side effect.

But health fads are not something that can be confined to the dustbin of history and, despite all our superior knowledge, we are not immune to the occasional fad ourselves. By occasional I mean constant and unrelenting fads that do nothing except cost us money and waste our time.

When it comes to health fads, cigarettes are perhaps the most insane. Lucky Strike ran a campaign in the 1920s that had the tag line: “Reach for a Lucky instead of a sweet.” The idea was that the more you smoked, the less you craved sweets. And over the course of a lifetime this was true but mainly because a smoker of Lucky Strikes would be too dead to eat sweets for a fair while.

L&M, another cigarette brand, told people that it was “just what the doctor ordered” while Camel told everyone that its cancer sticks were the smokes of choice for most doctors.

Princess Diana is credited with popularising colonic irrigation in the 1990s although a rebranding exercise around that time which saw it rebranded under the considerably more gentle name “colonic hydrotherapy” helped. It was – and still is in some quarters – said to reduce aggression, instil calm and lead to weight loss.

Other, less favourable reviews – from doctors and the like – have warned that side effects could include cramps, nausea, vomiting and renal failure.

This diet, devised by Robert Atkins, used to be a big thing. In fact Atkins was named by Time magazine as one of the 10 most influential people on the planet in 2002. Some people, including Kim Kardashian, still swear by it the high-protein/low carbohydrate diet which allows you eat almost all the meat, seafood, eggs and cheese you can stomach but virtually no carbs and not that many vegetables.

In the short term it might work although side affects include bad breath, tiredness, dizziness, insomnia, nausea and constipation. Oh, and we came across a very comprehensive piece of medical research from Spain that said people eating high protein diets are more likely to gain weight in the long-term.

There are so many absolutely ridiculous diet fads to choose from. None of them work. Seriously. Diet fads are all ridiculous. But few are as ridiculous as Fletcherism. This was a highly lucrative health plan developed by Horace Fletcher in the late 19th century.

The canny American believed that if every single mouthful of every single meal was chewed 32 times people would lose weight and stay healthy. Some people no doubt did lose weight following his programme but not because of some miraculous mastication powers it had but because they probably just got bored eating.

Another ridiculous diet fad that was supposed to keep people supersvelte and alive for longer was the Grapefruit Diet – which was also known as the Hollywood Diet. It has resurfaced again and again over many decades and is wonderfully simple if entirely useless.

Basically you eat a lot of protein-heavy foods and add a grapefruit to every meal. Does it work? No, no it does not.

In the 19th century a doctor from Ohio called John Bennet announced the world that tomatoes could be used to treat diarrhoea, bilious attacks and dyspepsia. This was a breakthrough announcement because only a generation or two earlier tomatoes were widely viewed as the devil’s fruit.

Dr Bennet hooked up with Archibald Miles – a man who could most kindly be described as a snake-oil salesman even though he too called himself a doctor. He started selling Dr Miles’ Compound Extract of Tomato and promised buyers it would cure jaundice, headaches, biliousness, rheumatism and common coughs and the common cold.

It sold by the truckload. It did not however cure any of the ailments he said it would, hardly unsurprising when you consider that today Dr Miles’ Compound Extract of Tomato is better known as ketchup. While it goes great with chips and is moderately healthy, it will not cure your biliousness no matter how much of it you eat.

The founder of the Seventh-Day Adventists, Ellen White, established a health sanitarium at Battle Creek in Michigan. She hired a doctor by the name of John Harvey Kellogg to be the health centre’s chief physician. He invented the cornflake and practiced all sorts of other random health fads in order to keep his charges alive for longer. He also pioneered a treatment for masturbators.

His cornflakes were not an instant success and it wasn’t until a rival thought to add sugar to the flakes that they became palatable for a wider audience.

Most of the health fads he tried have faded into obscurity although vegetarianism is a whole lot more popular than it was in his day.

While John Kellogg is undoubtedly the most well-known faddist, Luigi Cornaro might be the first. His Art of Living Long was published 1558 and the health regimen saw him eat just 400g of food a day at least at the start. Then decided that that was too much and reduced his food intake to just one egg. He also allowed himself a litre of wine too. He lived until just shy of 100 which was not too shabby given the time he lived in.

We only recently came across Convict Conditioning. It is some class of extreme workout that is designed to replicate hardcore prison workouts. The programme’s creator spent some time in San Quentin where he devised his “primitive” and “brutal” regime. It sounds horrendous.

There is no such thing as a detox diet. There are no foods that will help you detox. And there are no juices that will cleanse you. Detox diets are as real as pixie dust. You have organs that look after the detoxing side of things. And if you don’t believe us, believe the British Dietetic Association, which has called the whole notion of a detox diet “a load of nonsense”.

Some people today look at gluten like people once viewed tomatoes. If you are a coeliac or if you have a sensitivity to gluten then you have to avoid it, end of story. If you are neither of those things then cutting gluten out of your diet will probably make no difference to your health.

Kale is grand and it has its place. But its place is in colcannon or, at a pinch, tossed in butter and garlic. It does not have any business being disguised as crisps.

Goji berries, chia seeds, blueberries, kelp, oysters, green tea. It’s mad how all the so-called superfoods cost so much, isn’t it? Do you know what’s great for you? Onions. And porridge oats. And apples. They’re as super as any superfood but they cost a fraction of the price.

‘Settled women talk of glass ceilings, Traveller women are still outside looking through the window’
6

‘I’m going to ask you something,’ Sorcha goes, ‘Have you two been sleeping together?’
7