Heartening news for those aiming to minimise cardiac risk 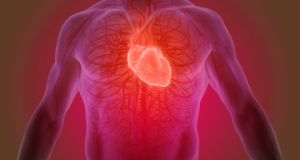 Heart of the matter: the majority of heart attacks, strokes and deaths from heart disease can be prevented with modest and sustained decreases in blood pressure and cholesterol

Cancer has overtaken heart disease as the leading cause of death in wealthy countries, according to Canadian researchers.

Two large studies published in the Lancet show that while cardiovascular disease remains, for now, the leading cause of mortality worldwide among middle-aged adults – accounting for 40 per cent of all deaths – that is no longer the case in high-income countries.

The findings were presented at the largest cardiovascular conference of the year in Paris this month. More than 33,000 health professionals gathered over five days at the European Society of Cardiology (ESC) conference to attend more than 600 expert sessions. What were the biggest stories of interest to the many Irish people with heart disease?

For the first time the detrimental effect of pollution and noise on patients with chronic heart disease have been evaluated.

The advice is contained in a updated guideline on how best to manage people with stable coronary artery disease.

Those with a previous history of a heart attack, or who have had bypass surgery or required stents in their coronary arteries have a twofold higher risk of mood and anxiety disorders. Stress, depression and anxiety are linked to worse outcomes while also making it difficult to improve lifestyle and adhere to medications.

A role for microbes in causing heart attacks is a new and interesting angle. Italian researchers presented a paper suggesting micro-organisms in the body may contribute to destabilisation of coronary plaques and lead to a heart attack. Coronary plaques are the blockages that develop in diseased arteries. Ideally they are stable, but if they are friable, pieces fall off and travel further down the artery causing acute chest pain.

The small study enrolled 30 patients with acute coronary syndrome and 10 patients with stable angina. Coronary plaque bacteria were extracted from angioplasty balloons and gut bacteria from faecal samples. They found the coronary plaques primarily contained microbes with pro-inflammatory subtypes belonging to proteobacteria and actinobacteria. Lead author Eugenia Pisano, of the Catholic University of the Sacred Heart, Rome, told the conference: “This suggests a selective retention of pro-inflammatory bacteria in atherosclerotic plaques, which could provoke an inflammatory response and plaque rupture.” Further research is now needed to see if antibiotics can prevent cardiovascular events in certain patients.

And there was good news too for the rest of the population looking at ways to minimise their risk of future heart disease. Researchers from Cambridge university told the conference that the majority of heart attacks, strokes and deaths from heart disease can be prevented with modest and sustained decreases in blood pressure and cholesterol.

Some 438,952 participants who experienced a total of 24,980 major coronary events were studied. Their average age was 65; some 54 per cent were female. It found that even small declines in LDL-C (bad cholesterol ) and systolic blood pressure (SBP) can substantially diminish the likelihood of ever having a heart attack or stroke. For example, the combination of 0.3 mmol/L lower LDL-C and 5 mmHg lower SBP was associated with a 50 per cent lower lifetime risk of cardiovascular disease.

Faced with sometimes demanding lifestyle regimes, this is the kind of research that offers real hope to those of us who can only manage small improvements.

Full-time caring: My husband had to become my carer
7