Up to 180 symptoms are associated with 22q11.2 deletion syndrome, including congenital heart defects. Yet some people with this rare and complex condition are not diagnosed until adulthood 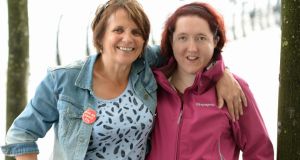 Anne Lawlor’s daughter, Áine, was 15 when she received her diagnosis. She has the rare condition 22q11.2 deletion syndrome, which is caused by the deletion of a small piece of chromosome 22.

After that things began to make sense.

“As a child Áine was always sick,” says Anne. “She didn’t have a congenital heart defect [which is a common feature of the syndrome] but she was always sick. During her early years I concentrated on that: but then it dawns on you, this child is not learning at the same rate as her class.”

People with the syndrome often have no known family history of the syndrome even though an affected parent has a 50 per cent risk of passing the deletion to their child. In these inherited cases, other family members can also be affected.

As well as heart defects, the syndrome is associated with kidney, eye and immune-system problems, as well as educational difficulties and mental health conditions such as schizophrenia.

All told, there are about 180 symptoms associated with the syndrome. Some of the more common ones include low calcium levels, and a very distinctive facial appearance, with symptoms ranging from mild to severe.

For Anne, while the diagnosis provided a huge boost, it was just the beginning.

“What I found was the diagnosis answered a lot of questions but it also gave me as many questions. I doubt that I could have been given anything more complex.”

Despite being the second most common genetic cause of congenital heart disease after Down syndrome, 22q11.2 deletion syndrome was identified only in the early 1990s and this has led to a lack of awareness among the public and healthcare professionals, says Kieran Murphy, professor of psychiatry at the Royal College of Surgeons in Ireland, who is an expert in the syndrome.

“It’s known by a number of other names, because previously they weren’t recognised as the same syndrome,” he says. “It is very common for people to have a whole range of different heart problems, and it’s increasingly being identified in very young infants because of the nature of the heart problem,” says Murphy.

Complexity of the syndrome

It took another seven years and an international conference, when Áine was 22, for Anne to be able to accept fully the complexity of the syndrome.

As a result, and with Murphy’s help, Anne and a number of other parents founded 22q11.2 Ireland, a support group for families living with the syndrome.

“There are 120 people signed up with us now,” she says. The group has also helped a number of adults who were undiagnosed.

“We have maybe six parents diagnosed along with their children, who never knew why they struggled in school or why they have this or that issue. Once the diagnosis is made, it’s like a lightbulb going on.”

But she worries that, despite the greater awareness, underdiagnosis is still a real problem.

“Within the UK and Ireland there are thousands of people undiagnosed; because the symptoms are so diverse, they really are. Even within families some siblings will have the syndrome but with different issues and problems.”

This concern is shared by medical professionals. Prof Andrew Green is director of the National Centre for Medical Genetics and a consultant in clinical genetics at Crumlin and Temple Street children’s hospitals. He explains that the frequency of the condition is estimated to be about one in 4,000, and believes it is going under the radar.

“Given the varied ways in which the condition can manifest, and the different ages at which problems can occur, the condition is definitely under-recognised,” says Green.

“There is certainly a lack of awareness of 22q11.2 deletion among health professionals, and we need to focus much more on education about the condition.”

However, he adds that the paediatric cardiologists and cleft-palate teams, who see babies with two of the major early manifestations of the syndrome, are very aware of the condition. They regularly request genetic testing for the condition on patients.

During his extensive research in the past 20 years, Murphy has also encountered people who received their diagnosis as adults.

“In some of our earlier studies, we identified a number of children because they had these heart problems. When the parents of these children were screened, some were discovered to have the syndrome and to be leading perfectly normal lives.”

For children, given the range of difficulties that can accompany the syndrome, diagnosis is key, he stresses.

“I’ve spoken to a number of parents whose children were presenting with multiple problems and they went from one specialist to another. The diagnosis allows them, and the healthcare professional, to understand the reason the child is presenting with all these problems. The diagnosis makes sense of things and we can then screen for the difficulties that people with this syndrome experience.

“For example, people with the syndrome can have very high rates of anxiety disorders, ADHD and autism, and it’s very important these are identified and appropriate treatment given.”

They can also have learning difficulties, with maths in particular being a challenge, he says. “If we know the child has the syndrome there are ways in which the child can be taught that maximises their ability to learn.”

According to the HSE, Ireland currently does not have a registry of people diagnosed with 22q11.2 deletion syndrome. However, according to a HSE spokeswoman, “the condition is recognised as a rare disease and will be included in the work of the National Clinical Programme for Rare Diseases in the HSE”. She also says the universal newborn hearing screening programme will help identify children with related hearing loss.

While the recent publication of the National Rare Disease Plan has given Anne hope, she believes much remains to be done. “Publishing it is one thing but implementing it is another. It’s only empty words unless it’s implemented. And I say that with the greatest respect to all those who have worked so hard to bring it this far.

“Without their dogged determination, it would not have happened.”