‘If you walk around, you’ll see that this isn’t a very happy town’ 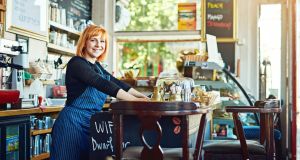 “If you can show me one person in Aldershot who’s happy, I’ll give you a free haircut,” promised Giovanni Gomma, a barber, in the centre of the Hampshire district that has been declared the happiest in the UK.

The 61-year-old, who has run his Gomma’s Haircare salon for 45 years, said the UK’s Office of National Statistics (ONS) findings must have got its calculations wrong “or maybe the whole country isn’t very happy”.

“If you walk around, you’ll see that this isn’t a very happy town, it’s a dying town,” said Gomma, who moved to Aldershot from Rome in 1973. “All the shops are shut, everyone shops online at Amazon, the atmosphere has gone.”

Gomma’s personal analysis of the town’s contentment conflicts with the ONS’s annual happiness study, which assesses factors ranging from health to crime levels, anxiety and wellbeing. It found that the residents of the borough of Rushmoor – which includes the Hampshire towns of Aldershot and Farnborough – were the happiest in the country and also have the highest “feelings that the things done in life are worthwhile”.

The 95,800 residents of Rushmoor were also, according to the ONS survey, the second-least anxious in Britain and Northern Ireland, after Newry, Mourne and Down.

After Rushmoor (ranked at 8.35 out of 10), the happiest place in the UK – according to the study – was Copeland, Cumbria with 8.24 points. After that came two locations in Northern Ireland – Newry, Mourne and Down in third place with 8.22 points, and Causeway Coast and Glens just behind in fourth with 8.15.

In fact, all parts of Northern Ireland beat the UK average of 7.7, apart from Mid and East Antrim, and Belfast. Still, both areas finished far above the 6.7 recorded in Fenland in Cambridgeshire, which came bottom out of more than 400 local authority areas.

The study concluded that, “compared with both the UK and the other countries, people in Northern Ireland continued to report better average ratings across all personal well-being measures”.

Average ratings of feeling the things done in life are worthwhile have improved in Scotland from 7.81 last year to 7.88 this year. Northern Ireland continued to report the highest average life satisfaction, worthwhile and happiness ratings, and the lowest anxiety ratings, when compared with the UK and the other constituent countries of the UK.

Despite the gloom in Gomma’s empty salon, it did not take too long to find a happy Aldershot resident. Harka Gurung, a cashier at the amusement arcade next door, was “very, very happy to be Aldershot”. The 55-year-old was part of the town’s large population of former Gurkhas and their families who settled in the town after retiring from the military.

Gurung, who served in the army for 15 years, lived in the Aldershot garrison north of the town for three years before retiring to a small house with his wife in its large ex-Gurkha area nicknamed “Little Nepal”.

“It’s a very nice life here in Aldershot,” Gurung said. “Most of the Gurkhas who leave the army stay here and many other Nepalese come here because of the community. My friends and family are happy, despite my wife’s sickness, but the healthcare is very good.” – Guardian