‘You can let your children down, but it’s far more difficult to let your dog down’

Give Up Yer Aul Screens: The dog walk is a chance to be without our phones for an hour 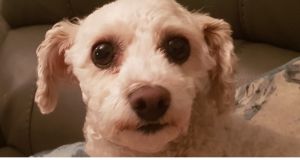 Roxie the dog. She gets the family’s full attention when out for walks

Give Up Yer Aul Screens is a summer series where Irish Times writers share their experiences of the challenge of reducing screentime. You can get involved here.

You can have a conversation with someone without looking up from your phone.

It’s rude, but possible. So it’s done. Frequently. At least in my house.

There have been days when the five of us have been in the same room, all silently looking at individual screens. There will be the occasional laugh or grimace, followed by a brief explanation to no one in particular. Someone will acknowledge the description. Then silence returns.

In fact, there will be six of us in the room – with one family member constantly glancing from chair to chair with impatience and confusion.

The dog is not a fan of the mobile phone, or the tablet, or even vintage technology such as the television.

She is, however, a big fan of more simpler things – such as the dog lead. Her eyes light up when she sees it, rather like the way mine do when I reach for the phone after it beeps to tell me someone I have never met has liked my most recent inane social-media post.

In fact, Roxie finds the whole mobile phone obsession in our house, quite frankly, ridiculous and idiotic – though she does also seem to believe the neighbour’s cat and some blackbirds are, any day now, going to launch a surprise attack on our house. So there’s that.

Still, she is regularly responsible for everyone leaving their phones down at the same time.

Just a few minutes walk from the house is the Suir, and a river-side path that 10-20 minutes later (depending on the number of ducks on view) opens into lovely community space near the centre of Thurles. The town park has, over the past decade or so, been transformed from, well, nothing to leave home for, into a base for a library, theatre, arts centre, skateboard park, playground, leisure centre, games court, outdoor gym and more. It is ideal for people walking dogs, children cycling bikes and, perhaps best of all, conversations without technological distractions.

Looking at your phone while walking the dog is a bad idea for many reasons – not least it is dangerous. But our regular walks have also become phone-free mainly because, well, the suspicion is that dog would crack up if mobile phones invaded its favourite time with the family.

You can let your children down, but it’s far more difficult to let your dog down.

We don’t need clinical trials to tell us what we already know for sure – our pets hate our phones, and for good reason

On these walks, there is so much going on around the dog it wouldn’t have time for a phone even if it could work it (it’s the paws, they just can’t work the buttons and swiping mechanisms). And that enthusiasm is infectious.

So the phones are either left in pockets, or, shock horror, left behind in the house for an hour. For some who won’t go to the toilet without the phone, it’s a significant achievement.

There have even been studies showing the negative impact that phone use by owners has on pets. “Gadget dependence is jeopardising the important relationships we have with our pets, particularly dogs and, to a lesser extent, house cats,” said veterinary surgeon Iain Booth recently, in a quote that people probably read on their phones while their confused and neglected pets sat in the corner of the livingroom.

But we don’t need clinical trials to tell us what we already know for sure – our pets hate our phones, and for good reason.

Dogs crave reassurance, attention, contact. So do phones. In fact, there’s a lot of similarities between dogs and smartphones. Both constantly demand attention; answer when called; are designed to play games; have a new idea every 10 seconds; go to sleep when inactive; warn when unwelcome guests make contact; and both frequently slip off the arm of the couch.

In our house, the biggest difference between the two is that the phone has a silent mode.