Covid-19: What we know about the rare child illness potentially linked to coronavirus

Q&A: Seven children in Ireland have been investigated for a Kawasaki-like syndrome 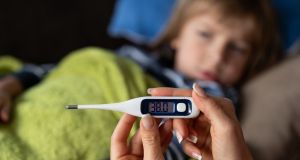 Prof Karina Butler emphasised that parents should not be unduly worried but should remain watchful for persistent symptoms. Photograph: iStock

So what is this condition I’ve been reading about?

Concerns are mounting about a very rare but potentially deadly inflammatory condition that has been affecting a small but significant number of children around the world, including in Ireland. A new study has shed light on the illness’s distinctive characteristics and provided the strongest evidence yet that the syndrome is linked to coronavirus.

How many cases are we talking about?

The European Centre for Disease Prevention and Control issued an alert about 230 suspected cases of this new paediatric inflammatory multisystem syndrome (Pims) linked to Covid-19, with two deaths reported – one in Britain and one in France. The condition has also been reported in about 100 children in New York state, including three who died.

How many children in Ireland have been investigated?

Seven children in the State have been investigated for a “very rare” Kawasaki-disease-like syndrome potentially linked to Covid-19, Dr Tony Holohan, the Chief Medical Officer, said last week – although he added that the cases had occurred over a period of time and that to call them suspect would be “stretching things”; they were, rather, instances where medics considered the syndrome as a possible diagnosis.

What is Kawasaki disease?

The Health Service Executive describes Kawasaki disease, aka mucocutaneous lymph node syndrome, as a rare condition that mainly affects children under five years old. It causes a severe fever that does not respond to medication, and a variety of virus-like symptoms, including a rash, swollen glands and dry and cracked lips. The cause of Kawasaki disease, which was first diagnosed in 1967 by a Japanese doctor called Dr Tomisaku Kawasaki, is still unknown, and there is no single test or procedure that can confirm the diagnosis.

What are the symptoms of Pims?

Pims has characteristics similar to those of Kawasaki disease. The children also showed at least two of the following symptoms: rash or signs of inflammation around the mouth, hands or feet; shock or low blood pressure; heart problems; evidence of bleeding disorder; and acute gastrointestinal problems.

How common is Pims?

Dr Holohan said it occurs in about 15 in every 100,000 children, adding that his advice was directed principally at clinicians, not parents. “This is about considering, when other conditions that might explain these symptoms have been ruled out, to consider this possibility. “We want clinicians to be more suspicious that this could be, in an unusual set of circumstances with a sick child, a possible explanation.” He stressed that a link between the Pims and Covid-19 had not been confirmed

Should parents be worried?

Prof Karina Butler, a consultant paediatrician and infectious-disease expert at Children’s Health Ireland, emphasised that it is extremely unusual for Covid-19 to develop into a serious condition in children, and that the numbers reported as presenting with the inflammatory symptoms are also small. She said there were normally between 20 and 30 cases a year of illnesses like Kawasaki disease in Ireland, of which usually only one would be severe.

Prof Butler emphasised that parents should not be unduly worried but should remain watchful for persistent symptoms and should not hesitate to seek medical advice, as they would under normal circumstances with an unwell child. Children’s Health Ireland also said parents should not delay coming to children’s hospitals with injuries or illness that require an emergency assessment. “Our emergency departments at Crumlin and Temple Street hospitals are safe to attend and are open 24/7.”

What is the latest research?

In the new study, published on Wednesday in the Lancet, doctors in Italy compared a series of 10 cases of the illness with cases of Kawasaki disease. The authors found that between January 2015 and mid-February 2020 only 19 children with Kawasaki disease were treated at Papa Giovanni XXIII Hospital, which has an advanced paediatric department, in Bergamo province. But during the two months from February 18th to April 20th this year alone, the hospital, which is at the epicentre of Italy’s coronavirus outbreak, treated 10 children with similar hyperinflammatory symptoms. Ten cases in two months – about 30 times the rate of the Kawasaki disease cases – suggests a cluster driven by the coronavirus pandemic, especially as overall hospital admissions during this time were much lower than usual, the authors said.

The small number of cases so far suggests that the new syndrome is unlikely to be widespread among children. None of the 10 in the Italian study died, but their symptoms were more severe than those experienced by the children with Kawasaki disease. They were much more likely to have heart complications, and five of them exhibited shock, which did not occur in any of the Kawasaki cases. They had fewer platelets and white blood cells of a type typical of Covid-19 patients defending against the infection. And more of the children with the new syndrome needed treatment with steroids in addition to the immunoglobulin treatment that both they and the Kawasaki patients received.

How accurate are the tests?

Eight of the 10 children tested positive for coronavirus antibodies. The researchers suggested that negative results for the other two children might reflect the fact that the tests were not perfectly accurate and that one of the children had just been treated with a large dose of immunoglobulin, which could have interfered with the test’s ability to detect antibodies.

The presence of antibodies suggests that the Italian children were infected with the virus weeks earlier. Experts say the new inflammatory syndrome appears to be a delayed reaction driven by a child’s immune-system response to the infection, in contrast to the primary way that the virus affects patients, by attacking the cells in their lungs. – NYT, Reuters, PA