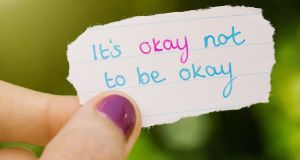 Will the Covid-19 pandemic help to reduce stigma around mental illness?

Interior designer Jude McCarthy says that her internalised stigma towards depression delayed her seeking the treatment she needed. Looking back now, she says that she suffered from mild to moderate depression from her late teens onwards, but, in 2011, two years after the birth of her son, her anxiety grew.

“I was unaware of what was wrong with me but one day, after hearing about an incident about a child slapping another child at my son’s crèche, I found myself worrying about it all day,” explains the 46-year-old.

She subsequently went to a counsellor who advised her to go to her doctor. “She said you’re on the absolutely top end of anxiety. At first, I wouldn’t take medication but later, I went on and off medication which made things worse. In 2016, after a very busy period of work, I got so bad that I couldn’t work. I’d walk my son to school, go back to bed and get up to collect him. When my doctor advised me to go into hospital, I was terrified.”

McCarthy says now that spending 11 weeks in a psychiatric hospital was the best thing she did. “I immediately realised that there was nothing to be scared of. The dark history of women in psychiatric hospitals in Ireland had left me with a stigma about getting the treatment I needed. But in hospital, I found people were so kind and I learned so much through lectures and different types of therapy. And I met some of the strongest people I’ve ever met,” she says.

After her time in hospital, McCarthy decided to share her story of depression during the First Fortnight Story Slam storytelling night at the Sugar Club in Dublin. “I stood up and spoke about my experience to 200 people and got a fantastic reaction. Then, I put a link to the Story Slam podcast on my business Facebook page and clients responded well. Now, I believe that if you don’t talk about what you are feeling, the fear remains,” she says.

During the Covid-19 pandemic, mental health experts told us it was normal for everyone to feel worried and anxious as we faced fears of becoming ill and losing loved ones from this new virus.

Paul Gilligan, clinical psychologist and CEO of St Patrick’s Mental Health Services says that while the Covid-19 pandemic saw levels of anxiety rise, it has had a particularly negative impact on those with underlying vulnerabilities. “The pandemic brought us together as a nation but no two people experienced it in the same way.

While face-to-face therapy was suspended or limited during the pandemic, many mental health services continued to offer online and telephone supports to clients. Some services such as SpunOut.ie and My Mind – which offered free online counselling for those directly affected by Covid-19 – noted a huge increase in demand for services during the pandemic.

Experts addressing the recent Oireachtas Special Committee on Covid-19 impact on demand and delivery of mental health services said that for some people new mental health difficulties arose during the pandemic but for others, addictions, anxiety, depression and eating disorders were exposed or exacerbated during the crisis - sometimes due to vulnerabilities in families forced to spend more time together. “All of our lives were changed by Covid-19. It had an amplifying effect for better or worse. Some families noticed anxiety, eating disorders or addictions which were previously masked,” said Martin Rogan, CEO of Mental Health Ireland.

Other studies - including one from the Central Statistic Office - found that one in five people drank more alcohol at home during the Covid-19 pandemic. And family homes were the ones in which increased alcohol consumption was highest.

But, the question remains whether people will seek help for their problems now as lockdown measures are lifted? And whether mental health services will be able to cope with greater demand for what some suggest will be delayed trauma following the pandemic?

A survey carried out by St Patrick’s Mental Health Services found that three in five people believe that being treated for a mental health difficulty is still seen by Irish society as a sign of personal failure. And three out of four people believe that Irish people tend to view people who have spent time as an inpatient [in a psychiatric hospital] differently.

So, following on from previous “Walk in My Shoes” campaigns, St Patrick’s Mental Health Services is now launching a social media campaign highlighting what it would be like if stigma didn’t exist. So for example, what difference does it make when someone with mental health difficulties has a supportive family, friends and colleagues? Or, what is it like if you seek help early rather than avoiding seeking help, due to your own sense of shame about suffering from a mental health difficulty?

The No Stigma campaign wants people to be more open about their mental health difficulties and seek help earlier rather than struggling on until they reach a crisis. The campaign encourages people to speak about the positive impact on their health when stigma or discrimination is not experienced. Or conversely, the negative impact that stigma has on their illness.

Sean Fitzpatrick, who has suffered from depression for 25 years, says people are much more willing to talk about mental health difficulties now than in the past. “I have conversations now with friends I wouldn’t have had in the 1990s. For example, last night I was watching a football match with friends and we had a 30-minute conversation about depression. That would have been taboo 25 years ago.”

He says that Covid-19 has however made things a bit harder. “The cliché of the ‘new normal’ where people are dealing with isolation, stress and anxiety is hard for people who have already had depression and know all those feelings but in another way, the pandemic has led to more understanding of depression.”