Could Brexit be bad for your mental and physical health?

As we saw with the recession in Ireland, a bad economic jolt can lead to huge emotional distress and increased risk of cardiovascular disease 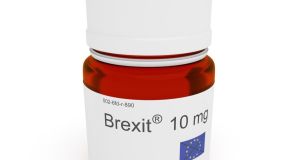 Could Brexit be bad for your mental and physical health? Apart from a feeling of sadness, most of us, I think, have looked on Brexit as a weird reality show – sometimes hilarious and sometimes boring.

Yet, we know the recession in Ireland led to huge emotional distress for many people – so a bad economic jolt can harm the minds and bodies of individuals.

The stress-effect of Brexit started quickly in the UK: prescriptions for antidepressants rose after the leave vote in 2016. Here, it’s been slower to arrive but as the threat of that economic jolt gets closer I suspect that more people than we know of are having sleepless nights.

By the time you read this, a miracle may have occurred: God may have emerged triumphant from the garden shed into which He locked Himself to hammer out a solution to the Irish backstop. Probably, though, He is still inside the shed refusing to come out.

Among the main contributors to stress are a lack of control and of predictability with potentially unpleasant consequences. If you are driving along a strange country road in rain and dark, running out of petrol, and with your phone battery dead and hence no sat-nav, you will almost certainly be stressed. It could be that around the next turn you will see the lights of a petrol station which is still open and beyond that you will see the road to wherever you want to go. But right now you don’t know that because you don’t have predictability. And with a dead phone, a rapidly falling petrol supply and the darkness of the countryside, you think you have less control than you actually have. So you’re stressed.

I won’t labour the comparison with Brexit because it’s obvious. But if you do business with anybody in the UK or receive an income in sterling from the UK, then you already have at least two of the ingredients for an increase in stress.

Emotional impacts on mental health in the UK include increases in a sense of powerlessness, anger and worry for both remainers and leavers. In Ireland, I should think that anger will be less of a factor among those affected but powerlessness and worry will increasingly make themselves felt as we get closer to wherever it is that we are going.

Stress has real-life effects on the human body as is spelt out by Prof Brian Hughes, of NUI Galway, quoted by the American Psychological Association in its Monitor on Psychology.

Prof Hughes is researching the impact of Brexit and his particular interest in his field is the damage stress does to the heart and the cardiovascular system. “In addition to the damage constant physiological arousal can cause,” he says, “people may use unhealthy strategies such as overeating, not exercising and resorting to nicotine, alcohol or other substances to cope with Brexit-related stress.”

This is called “catastrophising” and if there is one mental habit you really need to avoid if you are going to be affected by Brexit, that’s the one. Catastrophising is an act of the imagination because it’s about things that haven’t happened yet and may not happen – but it can stress you out and do you harm.

Sometimes, you can stop catastrophising by doing some planning, or getting advice – in other words taking useful action. Sometimes you can do it by occupying yourself with something different: walking, running, gardening, crossword puzzles, cooking, knitting, football, going to the gym, playing with the kids with full attention, gaming – it doesn’t really matter so long as it’s healthy.

And if you can avoid catastrophising you might just be able to see that turn on the road ahead that could take you where you want – or need – to go, instead of driving into the ditch.