Cliff tourism: The danger of the perfect selfieeeeeeeeeeee!

Walking on the Edge: The Cliffs of Moher and other tourist spots pose risks for the posers 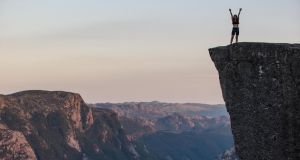 Prof Gerard Flaherty: `It was clear from our research that the desire to capture the most dramatic images for posting on social media had a significant influence on the travellers’ risk-taking behaviour' Photograph: Jack Taylor/Getty Images for Paramount Pictures

In 1980, during a camping holiday in Norway, my wife and I walked to the Preikestolen – or Pulpit Rock – a 25 sq m granite platform atop a mighty cliff looming 604 metres above the Lysefjord, near Stavanger. Drawn by an inexplicable urge, we crawled commando-style to the edge of the precipice and peered over.

The stomach-churning yet exhilarating view, glimpsed through the gaps between my fingers, confirmed what I suspected: it’s a long way down. What I didn’t suspect was that since 1930 the Geological Survey of Norway has feared that a half-metre – and slowly expanding – crack in the rock could increase the risk of the Preikestolen collapsing. This not only raises my blood pressure at the thought of plummeting 604 metres from a disintegrating cliff, but two further issues arise.

First, our 1980 camping holiday would today be rebranded as “an adventure travel experience”. Thus, the Adventure Travel Trade Association (ATTA), defines adventure travel as “trips that provide experiences (both mental and physical) to places which are novel or unique to the traveller, emphasise the natural environment, and provide challenge through experiences of culture, activities that promote physical health, and excitement/fun.”

Which brings me to my second, and more important, point. While an estimated 300,000 people will visit the Preikestolen in 2018, the popularity of cliff tourism is confirmed by the fact that there are more than one million visitors to Co Clare’s Cliffs of Moher, which rise up to 214 metres along an 8km stretch of the Atlantic coast. I learned this from a recent article in the Journal of Travel Medicine, the title of which – “An analysis of international traveller deaths at the Cliffs of Moher in Ireland, 1993-2017” – carries the implication that walking, sitting, bird-watching and taking photographs in a cliff-top environment are freighted with risk.

With the advent of adventure travelling in recent years, including activities such as volcano surfing, ice marathons and even guide-led ascents of Mount Everest, might contemporary travellers view the concept of risk differently than, say, 20 or 30 years ago? And could the trend for posting dramatic photographs online (selfies, etc,) promote riskier behaviour?

“We previously published an article on the risks associated with selfie-taking at tourist sites,” explains Prof Flaherty, “and it was clear from our research that the desire to capture the most dramatic images for posting on social media had a significant influence on the travellers’ risk-taking behaviour”.

Flaherty also refers to earlier published accounts of epic adventure travel, observing “that the adventurers of old had a more measured approach and typically were very well prepared for the physical challenges they encountered. It is easier nowadays to be an amateur adventurer with little or no technical experience, and this may promote a more carefree attitude towards risky adventure pursuits.”

So how can the life-enriching experiences of adventure travelling – including cliff tourism – be reconciled with the hazards that such activities entail? Flaherty first points out that the report into fatalities at the Cliffs of Moher, which he co-authored with Prof Eric Caumes of the Sorbonne University, Paris, underscores the importance of respecting the dangers of exposed coastal environments.

“It also highlights,” he adds, “the importance of responsible cliff-edge photography and avoiding alcohol consumption during visits to such sites. In this regard,” notes Flaherty, “the deployment of cliff rangers by Clare Co Council has been a very positive safety development in recent years”.

“The coastal path leading from Doolin to the Cliffs of Moher is one of my favourite hikes and I would highly recommend it, but cliff edges are inherently unstable and must be avoided. The vigilant cliff rangers and prominent signage reinforce this safety message for visitors, many of whom may be unfamiliar with the dangers of cliff-walking.”

Given the increasingly diverse nature of contemporary travel, Prof Flaherty and his team have also undertaken some recent research into health aspects of those occasionally spontaneous decisions we sometimes make: “One of the perennial challenges in travel medicine clinical practice is how to adequately prepare last-minute travellers who attend their pre-travel consultation with fewer than two weeks to go before their departure date.

“We have just completed a study in Ireland which found that one in six travellers falls into this last-minute category. In many cases, these travellers had complex travel itineraries and significant potential disease exposures, but their late attendance limited the options available for travel vaccination. We will be presenting our findings at an international conference in the USA and publishing them in due course.”

Meanwhile, visitors to the dramatic cliff-top scenery of the Co Clare coast could usefully bear in mind the advice of professors Flaherty and Caumes: “The Cliffs of Moher continue to be a beautiful national treasure and all individuals can enjoy a safe visit to the cliffs, once they adhere to the safety recommendations and avoid high risk cliff-edge photography or breaches of the protective barriers.”