Cheering on marathon runners is an emotional journey

Use the marathon inspiration to get off the sofa and get running, says Grit Doctor Ruth Field 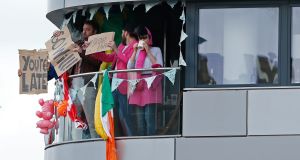 Supporters at this year’s London Marathon: ‘If you ever need your faith restored in humanity, go watch a marathon at mile 23.’ Photograph: Reuters / Andrew Boyers 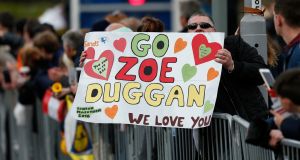 A few weeks ago I received a lovely message from a woman who, like me, was hoarse from cheering on marathon runners – in this case it was runners at the London Marathon. On the day, she told me, she was so inspired that she was thinking of entering next year. But she thinks she probably ought to try 5km first. A good idea, I think.

But I’m with her. Having been to the London Marathon only once previously – to run it – I was not expecting to be as moved attending as a spectator last month. If you ever need your faith restored in humanity, go watch a marathon at mile 23. I honestly don’t know who looked more deranged – the runners, the spectators or myself. And I don’t mean that disparagingly: we are deranged, in the best possible sense, when we are pushed to the absolute limits of our physical capabilities; when we witness others reach those limits; and when we are moved to tears every few minutes by strangers, by the struggle itself.

My face was permanently contorted with emotion, because wherever I looked I was confronted by heroism: runners honouring a loved one who had died or people raising money for illnesses that have affected their family or friends.

Some runners were almost broken, but still standing, still moving, still determined to finish what they’d started no matter how much their bodies screamed otherwise.

My eyes darted between runners and spectators and the tears just kept coming; families beating the drum for a chosen charity, giving their time and energy so completely for a cause, their young children smashing clackers and blowing whistles with relentless enthusiasm.

Our twin sons also blew their whistles relentlessly (not out of goodness or altruism, you understand; just to be spectacularly annoying). But, on the plus side, their enthusiastic blowing inspired others to move well out of earshot, presenting us with a great spot right at the front of the action.

Unfortunately, both boys were distracted by all the jelly babies littering the course and kept trying to run on to the track whenever they spotted a runner drop one close by.

A kindly supporter stepped in and gave them a little stockpile of their own, which gave everyone some blessed respite from their incessant whistle-blowing.

But the endless caterwauling and cheering too was deafening; a woman opposite our spot had a mini loudspeaker and spent hours calling out as many names as she could read emblazoned across the runners’ chests who passed her; all of whom were, of course, random strangers. But she called them on with great enthusiasm, cheering herself hoarse in the process.

She must have got hundreds of runners over the “wall”, because to hear your name called out over the throng – with love – is an energy boost like no other.

I was heartbroken when one of the friends we had been tracking online seemed to go past us before we’d seen her, and then we couldn’t catch up to her.

I was like a woman possessed – Olly and myself running with a twin each to try to get the tube from Blackfriars to beat her to the finish. But to no avail, as the tubes were completely rammed, so we watched her cross the finishing line on GPS – from the Underground. More tears: of joy for her, and sadness not to have seen her face.

Tears of a different kind to discover another friend we had been following was the wrong guy with the same name who was running an hour behind my old pal. Frustration! But the one guy we did see, Simon, my husband’s clerk and friend, was flying when we saw him at mile 23. He looked so vital and fresh, clearly delighted to see us there. I’ve only met the guy once or twice, but I welled up again, feeling so proud of him. Ludicrously proud, considering how faint our connection.

It took me back to my own marathon many moons ago and seeing my sister and great pal Meredith – twice.

Without the advantage of GPS or mobile phones (they were much bigger then and most people didn’t run with them), you had to be ruthlessly organised and patient.

I remembered the goosebumps as I ran, the rush I felt on seeing their smiling faces, and how I loved them so completely in that moment. How moved I was at their devotion in coming to watch.

My sister took a day out of boarding school and travelled by train from the Midlands, and my dear friend Meredith came down from Worcester and looked after my little sister all day. It meant the world to me at the time to see them there, and on Sunday I remembered exactly how it felt.

My husband, an extremely running- averse man at the best of times, was also an emotional wreck all day. He announced to our sons that evening: “We are going to do that every year.”

In my book that’s another step closer to – one day – wanting to run it himself. Moments of such intense inspiration in life are rare, and even briefer are these moments to capitalise on them, to call ourselves to action.

So, I would love to see that writer go for it. Start with her 5km (check out The Irish Times beginner Get Running course: irishtimes.com/getrunning) and build up from there – 5km, 10km and half-marathons – and there is no reason why you should not aim for a marathon in the future. Go for it.

Sean Moncrieff: Covid has brought out the best in us. It still does
10