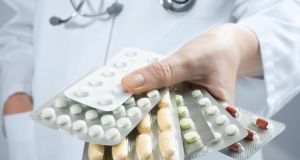 While side effects from medication are rarely due to prescribing errors, most are a known risk that will affect a very small proportion of those prescribed the treatment. Photograph: Thinkstock

Sir William Osler, the renowned Canadian doctor and educator, wrote: “One of the first duties of the physician is to educate the masses not to take medicine.”

He certainly wouldn’t be impressed with the current trend to overdiagnose and overtreat. While side effects from medication are rarely due to prescribing errors, most are a known risk that will affect a very small proportion of those prescribed the treatment.

At this time of year, antibiotic prescribing is understandably high. While not part of the treatment of influenza, they are required to manage the secondary bacterial infections that may follow a bad dose. Doctors are also on the lookout for atypical pneumonias that can hit otherwise fit young adults.

One of the best groups of antibiotics for these and other pneumonias are the macrolides. Erythromycin, the first of the type to be developed, has been around for years and is still effective; it was later joined by clarithromycin and azithromycin.

The macrolides had been under a prescribing shadow following the discovery of a possible link between azithromycin use and the development of heart rhythm abnormalities.

However, the most recent research into macrolide safety has found that the risk of arrhythmia and death was probably overstated. A retrospective study of more than 600,000 older people by researchers from the University of Western Ontario showed that those who received a new prescription of azithromycin, clarithromycin or erythromycin did not have greater increases in ventricular arrhythmia or mortality in the following 30 days than those who received a non- macrolide antibiotic such as amoxicillin or cefuroxime.

Prescribed to hundreds of millions

“Our findings are reassuring as in this population-based study of older adults we see no higher risk of serious arrhythmia or death with macrolide use versus non-macrolide antibiotic use,” he wrote.

So, unless you have an existing heart rhythm abnormality or a disease that impairs drug clearance, it looks as if the trusty erythromycin and its fellow macrolides have been given a renewed bill of health.

But just as confidence in an important group of antibiotics is restored, news comes that antibiotics may not be good for brain health. Researchers in Boston analysed 391 case reports of possible antibiotic- induced delirium in a bid to understand how antibiotics become toxic to certain patients, causing symptoms such as confusion, slurred speech, seizures and even psychosis.

It seems antibiotic-related delirium can be categorised into three types that correspond to specific antibiotic classes, each having distinct symptoms and brain-scan results.

One type, caused by penicillin, results in seizures and involuntary muscle contractions. Another type results in a state that resembles cocaine-induced psychosis.

Overall, 47 per cent of patients with possible antibiotic delirium experienced psychosis. Seizures were found in 14 per cent of cases, most of which were obvious to doctors because the patient was convulsing. But patients taking a cephalosporin antibiotic had non-convulsive seizures.

The authors found involuntary muscle contractions in 15 per cent of patients with possible antibiotic delirium. A loss of control over body movements was found in 5 per cent of all cases, with language dysfunction reported in 3 per cent.

The study is based on individual case reports, the weakest form of scientific evidence, and will need extensive follow-up research before a causative relationship between antibiotics and delirium can be assumed. Still, it’s a reminder to exercise prescribing caution, perhaps best summed up by Osler when he said: “The young physician starts life with 20 drugs for each disease; the old physician ends life with one drug for 20 diseases.”