BT young scientists get innovative in the health sector

Testicular cancer, tremor gloves and sleep patterns under the spotlight 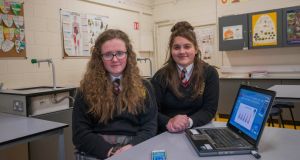 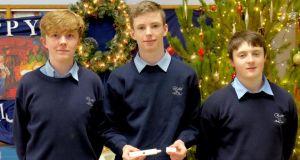 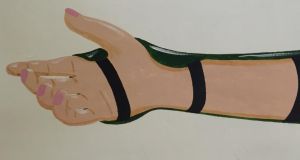 Students around the country have been working hard to finish their projects for the BT Young Scientist and Technology Exhibition (BTYSTE) at the RDS in Dublin this week. The exhibition will display about 550 secondary school student projects, shortlisted from more than 2,000 entries, and plenty of them have health in mind.

A helping hand for tremors

Two students in Limerick were inspired to develop a “tremor-controlling glove” when they saw how involuntary hand movements affected a person in their community. “We take actions like making a cup of tea or writing for granted, but those everyday things can be a struggle with tremor, so we wanted to help,” explains Caoimhe Danaher who worked on the project with Sophie Bridgeman.

The transition-year students, from Desmond College in Limerick, took measurements of the person’s hand and built a prototype long glove to minimise tremors.

“We used nylon plastic and moulded it into the shape of the person’s hand,” says Danaher. “The glove has padding and straps around it and it reduces the shake and steadies the hand more, but you still have full movement.”

Danaher reports that the bespoke glove worked well when tested, and that working on the project raised awareness among their classmates about conditions involving tremors, such as Parkinson’s disease.

Getting the measure of viscosity

Ellie Hogan in Scoil Mhuire in Cork was also prompted to develop a solution by seeing a real-life challenge: her project sought to measure the viscosity of fluids to help people who have difficulty swallowing. She was inspired by her late grandmother, who had motor neuron disease and needed to thicken or blend her food to the correct consistency to swallow it without choking.

“I wanted to design a device that would measure viscosity automatically that could be used in homes to make mealtimes enjoyable for everyone,” explains the fifth-year student.

Based on her research and her own knowledge of the area, she has been building a device that measures how a propeller moves through food. “The main idea is that the more amps used to spin the propeller, the more viscous the substance,” says Hogan, who plans to study science at college when she finishes school.

Three students at St Gerald’s College in Castlebar, Co Mayo, are seeking to tackle testicular cancer with their project – a home device to test for signs of the disease.

“Testicular cancer is the most common form of cancer in men aged 15-35 but we did a survey and not many people were aware of that,” says fourth-year student Rory Gaffney, who worked on the project with fourth-year students Seán Gallagher and Tiernan Walsh.

So the students have been building a device to do just that. Not unlike a pregnancy test, the user urinates on the device and it detects the presence of key molecules in their urine that could act as signals for testicular cancer.

The students plan to have a prototype to show at the RDS this week and while the technology would need to be validated, they believe the home-testing approach is an option for early detection of testicular cancer, or the recurrence of the disease.

For Jemima Turner, a fifth-year student at Newpark Comprehensive School in Dublin, the focus is on malaria. She has been studying the chemical structures of compounds from plants, bacteria and marine sources that have been shown to fight the disease, with a view to getting clues about how to make new antimalarial drugs.

Using computer-based analysis, she compared the structures of antimalarial molecules with similar molecules that are not active against malaria. Her analysis turned up some interesting features.

For a start, the molecules that were active against malaria had more ring-shapes in their chemical structures. “This result has the potential to be very useful in informing drug design,” she says.

This is Turner’s third year in the exhibition. Her previous projects have looked at the effects of calcium supplements on the stomach and the antibacterial effects of spices. She hopes to study pharmacy when she finishes school. Screen time If you have a “screenager” in your life, you will appreciate the work of Gabriele Kolesnikovaite and Róisín Tuohy. For their project, the second-year students at Lucan Community College asked: Does screen time affect the quality of sleep for Irish teenagers?

“As teenagers we use screens quite often and would like to find out if that affects sleep. If it does, we can cut back on it and have better sleep. If it doesn’t, we can still go on screens before bed without it disturbing our sleep,” says Kolesnikovaite. Previous research involving 10,000 teenagers in Norway reported that blue-light emitting devices – such as laptops, phones and games consoles – led to shorter sleep.

Using a questionnaire and, to a lesser extent, a sleep-tracking app, Tuohy and Kolesnikovaite have been finding that screen use does seem to affect the sleep of teenagers, but you will have to go to the RDS to find out more. “Our results also show other interesting facts, which we will display in our final project,” says Kolesnikovaite.

There can be phenomenal results when young people are given the platform of the BT Young Scientist & Technology Exhibition to bring their thoughts and ideas to life, says Shay Walsh, managing director, BT Ireland.

“The talent of our young Irish students is surpassed by none, and the commercial success of some of our past winners proves this event is a real stepping stone for the next generation of innovators and entrepreneurs.”

This week at the RDS the showcase will include projects on health, technology, farming, mathematics, physics as well as sport, music, fashion and plenty more, he says.

“I would encourage anyone with an interest in science to come along and see what it’s all about. I guarantee you will leave feeling inspired by the talent and spirit of our young students exhibiting.”