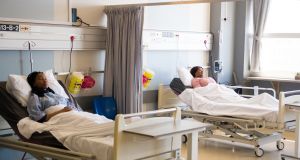 Private rooms, though quiet and, well, private may not always be the best choice for ill people.

Having a private room while in hospital is held up as something to be aspired to, a must-have for those who can afford it. But while the motivation behind having one is to ensure comfort and the best possible treatment in the event of illness, I don’t think that is necessarily the outcome.

Privacy is important, but in my opinion, having a private room isn’t. Apart from childbirth, there have been a couple of times when I’ve needed in-patient care and, having had my treatment in a shared ward, if I were to need hospitalisation again, I would want the same.

In my late teens, I was seriously ill and spent time in St Vincent’s University Hospital in Dublin. I was in intensive care for a while, but after that I was on a public ward, if my memory is correct, with five or six other women. I was more than three weeks there.

When I was older, I spent about the same amount of time in Beaumont Hospital, not far from where I live, following a road traffic accident that left me with a smashed up leg. Again I was in a public ward with five or six other women.

In both cases, I couldn’t have asked for more in terms of the medical treatment I was given. But there was something else, outside the medical staff, which helped my hospital experience.

It was, I believe, the communal nature of the shared ward.

I know why people often seek a private room. They fear disturbance. They see other patients as a potential nuisance and a room alone means no noisy interruptions at night, no sounds of other people’s snoring or of their suffering and no light pollution when some insomniac needs to read or when a nurse needs to monitor a high-running temperature.

But for me, those complaints are solvable with a good set of ear plugs and an eye mask.

There is the issue of privacy of course. In a shared ward there is only a curtain instead of four walls and there is always a risk that the details of a private consultation might leak out beyond the pleated blue drapery. But with the privacy of a single room there is a price, and I don’t only mean financial. It is loneliness and boredom and a self-focus on personal suffering that may not be conducive to recovery.

On a hospital ward there are distractions - other patients who are also suffering. It didn’t take me too long while recovering in my bed to become acquainted with the maladies of other women and count myself grateful to only have my own to cope with.

Then there were the shared stories of how the leg/arm/heart got broken, how the disease was diagnosed, who it was caught from. The women spoke of their worries about illness and other things - the family left behind or the job that wouldn’t wait much longer. There might also be a tale about some relative - a niece or nephew, a cousin or aunt. And after visiting time and a surprise call-by from the aforementioned relative, in the quiet of the ward, the revelation - “that was him, did you see him, the one with the Mohawk? That’s who I was telling you about”.

Inevitably, too, there was a certain amount of gossip. And I don’t believe that only happens on women’s wards. My late father was in and out of hospital a few times in his last years and he would fill me in when I visited on the details of the men in the room he shared - where they were from, who they were related to, their ailment and the trouble they were having with their leg or wife or brother.

Patients look out for each other, too. I recall very well my first solo journey out of the ward in St Vincent’s - a bid to explore the corridor - dragging a drip stand behind me. On the way back to bed I had a dizzy spell. There were no nurses in the room - the staffing ratios then were pretty poor - but other patients saw my distress and caught me before I hit the floor. If I’d been in a private room I would have fallen and injured myself and may have stayed on the ground a while before I was found.

I’m not suggesting for a moment that fewer private rooms is the answer to poor nurse-to-patient ratios - there needs to be more nurses, not fewer in our system.

I’m not claiming either, that if you put six ill strangers in a room together they will all get along. But for the most part, they will at least be distracted from their own illness and may end up helping each other in some small way.

What I think I’m trying to say is this - private rooms, though quiet and, well, private may not always be the best choice for ill people.

Sometimes a person is better off in the company of others, looking outward, instead of alone and focussed only on the self.

It’s Ash Wednesday, aka National No Smoking Day, tomorrow. Here’s how to kick the habit

My days of eating meat at every meal are over
5