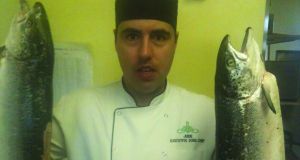 During Food Month, Irish Times Abroad meets people working in the food business overseas. Jude Margey is a 38-year-old chef originally from Letterkenny, Co Donegal, but now living in Wagga Wagga, a large town in New South Wales, Australia. He is married with a seven year-old daughter and is a chef-manager at a large ready-meals company supplying more than 10,000 meals a week.

When did you leave Ireland and why?
After getting married in Dubai in 2012 we moved back to Donegal and lived there for five years, but we both felt there was better opportunities and a better lifestyle for our family in Australia. Having lived in Sydney for a time, we felt it was worth a go so I started the visa and job process in 2016 and moved 12 months later in 2017.

I just love Irish seafood and shellfish. A pan-fried, well-seasoned piece of John Dory with a few nobs of butter and a few spuds. It’s the simple things in life for me

How did you become a chef ?
Having started washing pots and dishes in a Chinese restaurant in Letterkenny at the tender age of 14, I found I got a great buzz from working in a kitchen. I started to learn loads of new things about food and it got me hooked on the busy rush of kitchens. I did an interview for the Tourism College Killybegs (now the School of Tourism at Letterkenny IT). Twenty years ago it was hard to get in without a Leaving Certificate. I had just turned 17, but I was accepted so I moved to Killybegs for two years.

Where have you worked?
I have been lucky to work in great establishments with fantastic chefs and management. I started out in the famous Danny Minnies in Annagry in the Donegal Gaeltacht. From there I went to Kealy’s Seafood Bar in Greencastle where I learned a lot from the late James Kealy. He put me in touch with the executive chef at Luttrellstown Castle in Castleknock, Dublin. When a friend headed to San Francisco, I went with her and worked in an Irish pub/restaurant.

The winery we had 16 weddings booked for 2020 and a lot were cancelled due to Covid-19. I was on the look out for something with job security

Returning to Dublin, I got a job in Roly’s Bistro to keep learning and improving my craft. Then it was back to Donegal where I joined Castle Grove Country House as sous chef. I opened my own business for three years, but pulled the shutters down when the 2008 recession struck and jetted off to Sydney, then went to Dubai. Eventually I ended up in Wagga Wagga at a winery where I was head chef for two and a half years.

What was it like working on an Australian winery? Was it easy to source ingredients in a remote place?
I was in Geelong at Cunningham pier working as a head chef, but I moved interstate to Cottontails Winery in Wagga two-and-a-half years ago, living on site with my wife and daughter. Some 70,000 people live in Wagga, which is a five-hour drive from Sydney and Melbourne. A lot of people stop there for a night or two and visit the local wineries as it is halfway between each city. I found sourcing quality fresh produce quite frustrating at the start as I feel Sydney and Melbourne pick of the best produce and then the lower grades are sent elsewhere. Having noticed this, I started to buy 90 per cent of our produce locally.

What do you do now?
I left that position two weeks ago as at the winery we had at least 16 weddings booked for 2020 and a lot were cancelled due to Covid-19. I was on the look out for something with job security and secured the chef-manager job at a large catering facility called Mychef. It is not normally the kind of catering I do, but it is all about job security for now.

What does your day involve?
My daily day is quite full on at the moment. I see how much stock we have and what we need to order. I then do a morning briefing and send out work instructions to the different chefs. Throughout the day I make sure food is cooked correctly, recipe cards are followed and all Australian food and safety regulations are followed and recorded. I also ensure that chefs are not being put under too much pressure and that we create a fun, friendly, positive and professional environment. We are at the early stages of a new healthy food range, which is coming out in 2022, so that keeps me busy.

What is your favourite food?
For me that’s an easy one as I just love Irish seafood and shellfish.

Is there anything you miss about Ireland at the moment?
I haven’t been back home for nearly four years and I really miss my family and some good friends back home. Having been lucky to travel so much, I just love Ireland’s welcoming feel and friendliness.

What Irish Food do you crave?
It has to be a pan-fried, well-seasoned piece of John Dory with a few nobs of Kerrygold butter, a lemon wedge and a few spuds. It’s the simple things in life for me.