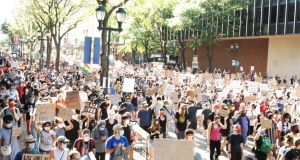 Thousands of Philadelphians rallied in front of police headquarters to demand the city defund the police on June 13th. Photograph: Cory Clark/NurPhoto via Getty Images

On the afternoon of Saturday, May 30th, I was sitting in Rittenhouse square with a friend, enjoying the fine weather and a drink. Our entire conversation was surrounded, and almost drowned out by, the sound of sirens. I argued this was nothing new for Philadelphia, despite the week America was having. George Floyd had been killed by police in Minnesota on Monday, May 25th.

We could not believe our eyes as we stood up to go to the shop. On the corner of the opposite street, the windows of a bank were being smashed, “F*** Banks” sprayed on the remainders, and people entering to destroy the interior of the outlet. It was broad daylight, 6.30pm. I was compelled to have a closer look.

The damage to the bank was minor in comparison to what was happening elsewhere on Walnut Street. Protests against George Floyd’s killing by Minnesota Police had turned into riots. Clothes shops, phone shops and technology shops were being blitzed. Police motorbikes were set ablaze, and a Dr Marten store was burned to a crisp. Philadelphia’s commercial centre was covered in smashed glass, clothes hangers, unwanted products, and shoe boxes. On Chestnut Street, two blocks further north, a lone piano was dragged from its previous abode, some playing it in jest as they passed.

I passed unengaged police as I walked home. They were parked and looking on from a distance; they had been instructed not to deploy lethal force and to protect themselves. The rioting and looting raged on into the night and well into Sunday morning. It was accompanied by the constant sound of news helicopters floating above the city and scanning its streets for footage. Philadelphia was very much alive after two-and-a-half months of stay-at-home orders due to Covid-19. “No Justice, No Peace” was the slogan of the weekend.

That Saturday evening’s events in Philadelphia’s main commercial district were, to an extent, prompted by the location of the Frank Rizzo monument, maintaining the memory of the former, and controversial, police commissioner and mayor. Located outside the Municipal Services Building, the public made their way in this direction and they were quick to deface it.

A long-time symbol of police brutality in Philadelphia, particularly for the African-American community and the LGBTQ community, the Frank Rizzo monument has always divided public sentiment. It was removed the following Tuesday, June 2nd, under the order of local authorities, and a mural of Frank Rizzo in the Italian market district of Philadelphia did not survive the end of the week. Local government was quickly alive to the hurt and pain of its communities.

It was also alive to the hurt of its businesses and retailers. A curfew was announced for 9pm on Saturday night; anybody with a mobile phone received a text from local authorities ordering them home. Though the police had been overwhelmed by public unrest on Saturday, Sunday morning told a different story. It seemed as if the full police force was on the streets, moving in groups of five and six and never beyond visibility in Center City, which was now wearing a very different look.

A walk around the Walnut Street commercial district saw all the looted stores completely boarded up, and many others followed suit; my local supermarket, unaffected by the night’s rioting, boarded its premises too. The face of capitalism was taking cover as city life had become unpredictable.

A curfew was announced for 6pm on Sunday, and shops began to close by 3pm. Unaware of the updated measures, my housemate bid me good luck as I announced I was going out to get some food. “They’re all closed,” she said, “I was just out.”

At 5pm I found myself running around empty streets looking for an open supermarket, knowing I had only an hour to succeed. Luckily, I saw two people coming towards me with a pizza; they pointed me in the right direction. I was stopped by cars and pedestrians on my way home: “Hey buddy! Where did you get that pizza!?” I was one of many caught unaware by the new curfew and the pre-emptive measures taken by businesses.

I ate the pizza in relief with the sound of helicopters persistent in the background. That night saw more rioting, though nothing as centralised as Saturday evening. The looting of lone shops in different areas and the blowing up and smashing of ATMs were the main incidents. The police were more attuned to the situation, and largely managed to deter the scale of the destruction seen a day prior.

The weekend’s unrest provoked tensions between different groups in the city. News spread on Monday morning of snipers on shop rooftops in south Philadelphia, and men armed with baseball bats, hammers and shovels in Fishtown, all ready to protect local businesses from further looting. Hardly able to believe what I was hearing, I tuned into local news channels to find images of weaponised groups standing alongside police. I took to the streets to verify the news for myself.

Fortunately, I saw no such groups in Center City. A walk by the Municipal Services Centre, however, confirmed the presence of anti-protest sentiment. Motorcyclists and quad drivers were circling the area and revving their engines to intimidate protesters who had gathered in numbers to peacefully confront the Police and the newly arrived National Guard. The vigilante uprising, though short-lived, became a major cause of fear for many. Unmasked and identifiable to the police, they were easily and soon dispersed.

City-wide curfews remained in place throughout the week, helicopters hung over Philadelphia, and supermarket opening hours were changing by the day. Peaceful protests continued in numbers, and the looting died off due to heavy police presence. The announcement of an impending tornado on Thursday evening brought everyone indoors and Friday saw the city in need of another major clean-up. Uprooted trees were scattered across the city’s streets and cars were smashed with their impact. Notwithstanding, police presence remained high on Friday and the city was gearing up for an enormous protest on Saturday.

The whole city was effectively shut down in its anticipation. Streets were closed, many bus routes cancelled and very few shops open. Police tanks and artillery vehicles were parked throughout the city and around the Philadelphia Museum of Art, the destination of the day’s protests. The effect was an ominous presence of authority and the possibility of total control: it was ugly. Angry, loud and powerful, Saturday’s march brought together huge numbers from all communities demanding justice, systemic change and major police reform.

“No Justice, No Peace” was the rallying call heard from the crowds, but neither violence nor defacement were the order of the day. Unlike the fate of the Frank Rizzo monument a week prior, the statue of Rocky Balboa outside the Philadelphia Museum of Art was co-opted by protesters; a “Black Lives Matter” sign was draped below his raised and victorious arms. An inspiring event, it honed the civil-rights message of the week-long protests and made it louder. With no impending threat to social order, the enormous police vehicles were removed quickly thereafter; they have not returned since.

Five weeks on, the majority of businesses remain boarded up in Philadelphia’s commercial district, with little sign of re-opening any time soon; they were due to return to business on Friday June 5th with the lifting of Covid-19 restrictions. A walk down Walnut Street last night confirmed a new turn in protest strategy. Boarded-up outlets are now being artfully decorated in Black Lives Matter graffiti, and so the street is becoming, if only temporarily, a memorial to recent events and a continued site of resistance.

Elsewhere in the city, controversial monuments continue to be sites of contestation: on Sunday June 14th, armed residents surrounded a Christopher Columbus statue on Marconi Plaza in South Philadelphia, seeking to protect it from protesters intent on removing a symbol of a history of racism. A “public process” will be undertaken to decide the future of the statue, mayor Jim Kenney has announced.

Public sentiment in the city now suggests that the events which have taken place in Philadelphia, and across America, since May 25th were an inevitability. The continued marginalisation and oppression of various communities that Covid-19 has starkly brought to light, combined with George Floyd’s killing, pushed many far over the edge of what was already a very volatile situation created by systemic racism. With protesters in the City of Brotherly Love now galvanised and intent on various forms of systemic change, the public eye is focused on November’s elections.