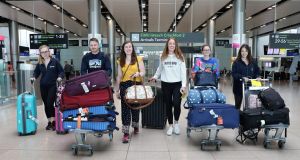 In a near deserted Dublin Airport, there were almost one hundred doctors among 170 Irish citizens returning from Australia through the arrival gates on Thursday afternoon, coming home to work in Irish hospitals and help fight the coronavirus outbreak.

The “rescue flight” from Perth, Australia, connected through London and had been organised in recent days by the Department of Foreign Affairs.

Zoey Lynch, one of the doctors who had been working in Perth, spent her 27th birthday on Monday organising a list with the names and passport details of Irish doctors who wanted to return home to work in hospitals during the global pandemic.

“I had about 60 to 65 names within 20 minutes, all Irish doctors living in Perth who were keen to return,” she told The Irish Times upon arriving in Dublin Airport.

By Wednesday there were between 90 and 95 doctors on her list with seats on the flight home. All 170 Irish citizens on the flight will now be required to self-isolate for two weeks.

Dr Lynch graduated from the Royal College of Surgeons in 2017 and after a year interning in Dublin’s St Vincent’s Hospital moved to Australia. Like a large number of the medics on the flight, she was due to return to Ireland in July to start on medical or surgical training schemes.

“We realised if we didn’t travel quickly we weren’t going to get back at all. We’re all incredibly keen to get involved, hands on here and take care of Irish patients and our families,” she said.

“I’m proud of everyone and also I think we should be proud of our Government in how we have handled the situation so far, all the hospitals, and the nation as a whole,” she said.

Hillary Coyle (28) was another one of the Irish doctors who helped organise medics onto the flight home.

“I’ve been a doctor over in Australia for the best part of two years, I grew up in Galway, trained in Limerick and interned in St James’s … We all really wanted to come back and help everyone on the frontline at home,” she said.

Speaking about working as a doctor during the coronavirus crisis she said there was some fear. However, “it’s drummed into you in medical school, you don’t run away from things like this,” she said.

“We’re just so happy to be on Irish soil, it’s an incredible feeling and now just to get into isolation and get back to work as soon as we can would be our goal,” she said.

Deirdre Ryan, another returning doctor, said Irish medics working abroad had felt a “pull” to come home during the crisis. “There’s a worldwide pandemic, we felt a duty to act in our roles as doctors and the pressure to come home was to do that in Ireland,” she said.

The flight left Perth on Wednesday afternoon and then Aer Lingus chartered several flights to bring the Irish from London to Dublin, and passengers on board included non-medics seeking to return home.

Aidan Holmes, from Celbridge, Co Kildare, was waiting at the arrival gate for his 23-year-old daughter Erin who he had not seen in two years.

Erin, who was returning home on the flight with her partner Shane O’Flynn, had booked two flights trying to get back to Ireland only to have both cancelled.

“They had emailed the embassy in Perth, and they got a phone call to say, ‘grab your bags your flight is there’,” Mr Holmes said. “The worst thing for me is not being able to hug her,” he said.

There was no rush for an embrace when Erin came through the arrival gates with her bags due to social distancing requirements, and she will self-isolate in a separate room at home for a fortnight.

Having his daughter overseas during the coronavirus outbreak was “very scary,” Mr Holmes said. “For awhile we thought she was in the best place, but in the last week we realised she was better off home,” he said.

Four young men, one with a surfboard in hand, were among the other Irish citizens returning from Perth on Thursday afternoon.

Eoghan Lally (24), John Mulhearn (23), Conor Leavy (25), and Philip Denmead (25) had been travelling up the east coast of Australia when the global health crisis began to develop.

Panic shopping, job losses and travel restrictions hit Ireland long before the effects of the crisis began to be felt in Australia, they said.

“It all kicked off very fast, one day we came back off a beach [AND]everything was starting to shut down,” Mr Lally said.

The four friends had travelled to Australia together and will now self isolate as a group for two weeks in an empty house owned by one of their grandparents.

“We were planning on being in Australia until the end of March, and then we had flights booked to Bali for a few weeks and flights booked to the Philippines, Hong Kong, Dubai. At one stage we had 11 outstanding flights and the majority of them were cancelled,” Mr Leavy said.

This has left the group with “thousands” spent on cancelled flights, and “not really” much hope of seeing full refunds other than airline credits, he said.