The Great British Bake Off, newly on Netflix, shed light on the origins of this expression 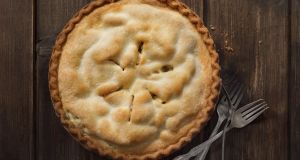 If you know what a soggy bottom is, then you probably also know that seven series of The Great British Bake Off arrived on Netflix at the end of last month. Goodbye productivity, hello pastry!

In series one, first aired in the late summer of 2010, co-host Melanie Giedroyc remarks that baking might be making a comeback. She couldn’t have known how prophetic her quip was, or how much a part the show would play in the mainstream revival of pastel-hued whisking, mixing, rising and flouring.

The charm of GBBO wasn’t just in watching participants biting their nails while peering into pre-heated ovens, or seeing grown-ups brought to tears by a tough dough or a failed mille-feuille construction. It wasn’t simply about the warm feeling you got when judge Mary Berry complimented someone on the lightness of their bake, or the indignant fury you felt when judge Paul Hollywood was way too harsh with his critiques. It was genuinely educational, too.

Hosts Sue Perkins and Giedroyc would take viewers on weekly historical road trips of ingredients like sugar and explorations of specialities such as our own soda bread.

In series one, Giedroyc meets food historian Jane Struthers to talk about pies and its connection to the British working classes. “In Medieval times,” explains Struthers, “The Church looked after people who were ill or didn’t have enough money to look after themselves. They would take the meat that was leftover from the end of the day from banquet or from high table, and they would give it to the poor in their parish. And the poor would take it to the pie shop where it would be wrapped in pastry and cooked for them.”

What would be in the pies? Turns out it was offal, ingredients that become arguably more appetising once encased in a buttery pastry case. One particularly famous pie was made from the offal of deer, and it was known as umble pie. “The gentry would eat the venison but the servants would be given umble pie”, explains Struthers. And, yes, that is where the expression “humble pie” comes from. So, presumably, humble pie tastes rather gamey.