This warming soup has been nourishing Irish people for 1,000 years. Here’s how to make it 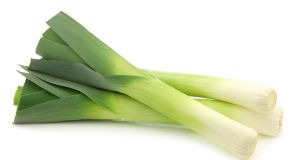 They come in all shapes and sizes but for many dishes, small, young leeks are best. Photograph: iStock

Leeks get the short end of the stick in the kitchen, supporting nearly every soup and sauce, but rarely getting to shine on their own terms, though Paul Flynn has a recipe for them this week.

They come in all shapes and sizes but for many dishes, small, young leeks are best. Young leeks in seaweed butter? Young leeks with grated roasted hazelnut and smoked Knockanore cheese?

To elevate either of these to more of a main course, try adding cooked spelt or rye (you can buy online from Dunany Farm).

As young leeks are extremely tender, they don’t take too much cooking, so whether baking or frying them, keep an eye on them so they still have a nice texture when serving.

How to make leek and oatmeal soup

For rainy cold days in March, you may want to try this comforting soup. Leek and oatmeal was a traditional Irish soup (called brotchán roy), which used leeks, oatmeal and milk. These three ingredients are central to Irish “Gaelic” cooking, though some recipes have spices, such as mace, nutmeg and black pepper. The inclusion of these ingredients represents a fusion of Irish and outside influences. References to brotchán appear in the ninth century manuscript The Monastery of Tallaght, wherein it is described as a meal for the monks.

Place 750ml of chicken stock and 750ml of milk in a pot with 50g of pinhead oatmeal. Season with a little salt and set on a low heat and stir continually to avoid the oatmeal sticking to the pot or forming lumps. Blend the mixture together and pass through a fine sieve.

In another pot, fry off eight small leeks in 50g of butter with some fresh thyme and rosemary. Again, keep the heat quite low as you do not want the leeks to colour, just sweat down and release their beautiful hidden sugars. When the leeks are soft, add the oat mixture and 100ml of cream. Heat slowly for 10 minutes. Check the seasoning before serving in warm bowls garnished with freshly chopped chives and a little swirl of cold pressed rapeseed oil.