The last bitter word about the origins of Seville oranges

Now We Know: Citrus fruit has travelled from the Himalayas to Florida over the millennia 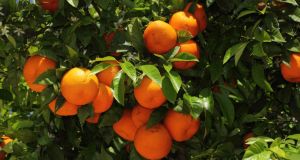 It’s believed that the Seville orange was brought to Spain and cultivated in Seville by the Moors in around the 10th century. Photograph: iStock

A wise bear always keeps a marmalade sandwich in his hat in case of emergency, according to Paddington Bear. The bittersweet zing of a good marmalade can be the common flavour that threads your breakfasts together year round, whether it’s orange, lemon, lime or grapefruit marmalade.

Traditionalists may argue that Seville marmalade, made from the orange associated with southern Spanish city, is the best of the bunch.

Otherwise known as the bitter orange, this citrus fruit wasn’t always part of the Spanish eco-system. In fact, the origin story of all oranges and citrus fruits brings us to the foothills of the Himalayas.

According to the findings of scientists who analysed the genomic data of more than 60 different varieties of citrus fruits, published in the scientific journal Nature, if you were craving a glass of freshly squeezed orange juice 8 million years ago the only place you could have got it was he foothills of the Himalayas.

It’s believed the oranges spread throughout south east Asia and into Australia, taking their time to hit Europe.

The Romans were into quince preserve – there’s even a recipe in the Roman cookbook Apicius for preserving whole quinces – but it was a while before oranges became available to European preservers. It’s believed that the Seville orange was brought to Spain and cultivated in Seville by the Moors in around the 10th century, before being eventually brought onwards to Floria and The Bahamas as European colonialists moved into the New World.

One of the oldest recorded recipes for orange marmalade can be found in the English recipe book of Eliza Cholmondeley, which is dated 1677. Keiller’s Marmalade, founded in Dundee, Scotland in 1797, is thought to be the first commercial brand of marmalade in Great Britain, and the Scots are often credited as adding marmalade to the breakfast table.

The Seville orange is too bitter to eat plucked straight from the tree; instead, you need to add lemon juice, preserving sugar and time to make them palatable. In Seville, streets are lined with orange trees with their peak season coming in December and January. According to andalucia.com, the Sevillianos themselves don’t eat these famously bitter fruits in any form. Rather, Seville marmalade, and the use of Seville oranges in baking, is considered a British idiosyncrasy.

If you fancy yourself a bit of a Marmalade master, you can get ahead of the competition by prepping for the 2020 Marmalade Awards held in March 2020 as part of the World’s Original Marmalade Festival in Dalemain Mansion, a Georgian stately home in Cumbria.

Find out more on dalemainmarmaladeawards.com and enter your aspiring marmalade by December 2019.

If you’re looking for a special jar for your pantry, seek out Crossogue Preserves (crossoguepreserves.com) made in Co Tipperary, whose multi-award winning marmalades have cleaned up at the Marmalade Awards, winning over 32 accolades in five years of being in the running.

The restaurants that will not reopen in 2020

The restaurants that will not reopen in 2020
2