Bastille Day: 'The French mostly know nothing about Irish food and cooking'

When I decided to become an Irish chef in France I approached the whole thing with a fair degree of nervousness ... 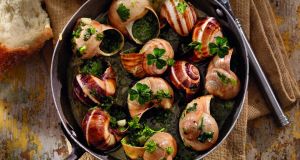 Martin Dwyer: “As an Irish chef in the Languedoc, I was going to produce the foods and the dishes which were native to the area.”

I think we in Ireland think the French in some way “own” cooking. Think of the names of the sauces they have christened – hollandaise, Béarnaise, mayonnaise, vinaigrette. Think of the classic restaurant dishes – sole bonne femme, boeuf bourguignon, profiteroles.

France in the Irish sub-conscious is the home of food, so when I decided to become an Irish chef in France – cooking for the French – I approached the whole thing with a fair degree of nervousness. I mean, what was I, a piece of coal in Newcastle?

Another truth I knew I had to live with was that my répertoire de cuisine (there we go, another French term) was basically French. I wasn’t going to cook up a storm of Vietnamese specialities or stun my clientele with Korean dishes or even, which would have been more likely, feed them with recipes from my native isle, à l’Irlandaise.

I had decided, before I ever started, that as an Irish chef in the Languedoc in Mediterranean France, I was going to produce the foods and the dishes which were native to the area. These, after all, had stood the test of time, were designed to be accompanied by the wines of the area, and suited the temperature and the climate.

Therefore, before I ever began, I was looking at the bourride of the Languedoc, the moules farcies of the Bassin de Thau, the confit de canard of the Haute Languedoc and the wonderful lamb of the Massif Central, cooked with herbs des garrigues.

My route to becoming an Irish chef cooking for the French, in France, came about when my wife Síle and I decided to open La Presbytère, a maison d’hôte in Thézan-lès-Béziers, a Languedoc village near Béziers.

A maison d’hôte is a chambre d’hôte which serves meals. This is really a hark back to the days before hotels or restaurants, when the weary and hungry traveller would stop by the nearest house and request food and lodging.

As a result, the concept of this type of hospitality fell into a different category to that of the hotels and restaurants of France, which started to appear at the beginning of the 18th century, after the French Revolution.

French chefs have always been numerous in Ireland and over the years many have run successful restaurants here; we Irish chefs, on the other hand, are not renowned for conquering the French palate.

I accepted this as a disadvantage when I moved here first. I felt the French were going to be far less keen to risk handing over their taste buds to an Irishman. This is not a condemnation of Irish cuisine by any means – the fact is the French mostly know nothing about Irish food and cooking but they associate our style of cooking with that of England and “La Cuisine Brittannique”, for which they have the utmost contempt. They are quick to relate stories of holidays in England – usually 30-odd years ago – where they were fed, they assure me, disgusting food everywhere.

Of course, like all widely believed myths, there is a small kernel of truth in this, and 30 or so years ago on a limited budget (and the French abroad are almost always on a limited budget) you could indeed eat far better in France than in the UK – you still can, but with the advent of fast food outlets the lines between the two countries have become very blurred indeed.

So the first reaction when they discover I am the chef de cuisine in my own maison d’hôte is one of disbelief, and they start to ask me what kind of food I actually cook.

It is at this point that, realising the deep-dyed prejudices of the French, I usually do a little massaging of the truth. I tend to tell them I trained in France, in a relais de campagne in the Loire (which I had, but just for a small part of my training) and that in my own restaurant over the years I cooked mainly French food. (True, even though the French food spoke with a strong Irish accent).

This they find very reassuring.

Then I try to let them catch a glimpse of the Eurotoques charter hanging on my wall. They may or may not have heard of Eurotoques, but all will have heard of the late Paul Bocuse, a national hero in France, whose signature is on the bottom.

The French, like us, have a certain amount of stock phrases with which they acknowledge certain experiences. The one they use most on me when they arrive downstairs around aperitif time is an inevitable: “Oo la la, ça sent bon”– “something sure smells good”.

My small satisfaction at this moment is the appreciation in the voices of my diners as they say this, but more particularly in the deep regret in the tone of the people who have decided to dine elsewhere.

It is amazing how many decide to dine with us the next night once they have had a whiff of the heady scents of roast lamb perfumed with garrigues herbs, or the piquant scent of a pot full of mussels flavoured with basil and garlic.

Once I have enticed them to my table and actually managed to feed them, the French really are the most appreciative eaters in the world.

One recent comment from a Frenchman in the visitors’ book reads “Deux journées de régale pour les papilles” (two days full of delight for the taste buds) another “une cuisine de rêve” (cooking to dream about). These convince me that slowly (very slowly) I am in my own way managing to persuade the average Frenchman that we Irish are, after all, well able to wield the odd pot and pan in the kitchen.

Nowhere was this better demonstrated than a few years ago, when I hosted a reunion of a rugby club who had played together in Montpellier University 25 years previously. This reunion happened at an opportune moment, as Ireland had won the Grand Slam just a few weeks previously.

Grasping my moment, just as they were tucking into their baguette and confiture d’abricots, I arrived at the table with a large platter of Irish wholewheat scones, steaming hot from the oven.

“This,” I said, “is what we feed the Irish rugby team on.” They cleared the plate.

The truth is, I find the French very easy to cook for. I am in total agreement with a nation which thinks some of the happiest moments of the day are spent at the table. I love my food and so do they and they recognise a kindred spirit.

I first realised this, not at my own table, but at a dinner party with some French friends in the village. Someone mentioned a restaurant in the mountains that had a reputation for good food. We had eaten there a short time previously and I couldn’t resist extolling the charms of a delicious foie de veau I had eaten. It is just possible I was being a tad over-enthusiastic because I suddenly realised my French friends were all laughing.

When I looked confused they explained – “It is the way you talk about the food Martin, it is plain you have turned into a Frenchman.”

Celebrating that special relationship between grandparents and grandchildren