The Mug Shot is a coffee kiosk in the public car park of the Four Courts that offers training and work experience for people who have been through Ireland's prison system. 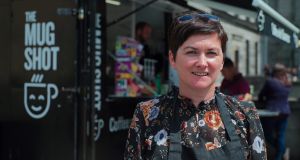 Interesting people congregate around the coffee cart in the yard of the Four Courts. Barristers with horsehair wigs and flowing robes stand around deep in conversation. Litigants in fear of having their homes repossessed. People in fractious disputes over property, or prolonged fights with siblings over a will. Others who have lost loved ones.

But some of the people with the most interesting stories are those who listen to their stories: the baristas behind the counter.

The name on the coffee cart is a bit of a giveaway about the background of these unusual baristas: Mugshot. For all the employees of this boutique coffee company are ex-prisoners. On their exit path from prison, they have trained as baristas and are now gaining experience by working for a proper business.

'You hear the stories about Mountjoy. But then you get into a routine and keep your head down and stop messing and don’t try to be the hard man there'

Anthony is a Munster man in his mid-30s. He came from a solid family in a rural community. He had a steady career for a decade but then his life descended into chaos through drug abuse. He got a five-year sentence for drug possession and ended up in Mountjoy.

He is civil, well spoken and has a realistic take on his situation. “The conviction was a bad shock. It was harder for my family than it was for me. At the start it was upsetting and traumatic. You hear the stories [about Mountjoy]. But then you get into a routine and keep your head down and stop messing and don’t try to be the hard man there.”

Anthony was a model prisoner, worked in the kitchens and was released after 2½ years. But he came out into a world that – for him – had changed beyond recognition. He was now an ex-prisoner, with no home, no job, no trust from others. His prospects were low.

Luckily, an agency called Pace was at hand. An acronym for Prisoners Aid through Community Effort, it is now a half-century in existence and has helped thousands of former inmates back to employment and stability, and away from crime.

Pace has been providing training for many years but as Maggie Clune, its head of training and social enterprise, says, it became clear there was a missing link.

“We could see that a lot of people were getting trained, and gaining certificates, but not getting the opportunity to put those skills into practice because employers were fearful of taking on people with criminal records.

“We decided we needed to create the work ourselves. So we set up with a flower planter-box and garden-furniture business. We provide furniture for Dublin City Council.

'You get all kinds here – some who have experienced terrible tragedy and loss. We are here to listen to them'

“We are showing the community that this cohort has something to give back, and they are talented and have skills. A lot of people we are working with do want to change.”

So how did the idea for its next venture, Mugshot, come along?

“Not everybody wants to make things,” says Clune. “We decided to look at another industry: the coffee industry. It’s booming in Ireland. The feedback from participants in Pace was they wanted to work with customer services in sales, and potentially open their own businesses.

“Rather than try and open a coffee shop, we decided to start small. We built a cart in our metal shop in Santry. We got help from a marketing company. And we opened about a year ago.”

Train as a barista

Anthony had begun working at the Pace workshop in Santry while on day release. When his sentence was completed he got accommodation in Priorswood. He was one of those who worked on building the coffee cart. He was then asked if he would like to train as a barista and he’s been working in that role for a year.

“We started off with a pitch outside Cloverhill court, but it was slow. We have been here in the Four Courts since November, and it has been busy,” says Anthony. “You get all kinds here – some who have experienced terrible tragedy and loss. We are here to listen to them.”

For himself, it’s about putting his criminal past behind him. “It took a little time to stop feeling weird and wary about it and thinking about what other people were thinking I am in.

“I was very apprehensive. I felt a little bit uncomfortable with people knowing I was in prison.”

The support of Pace has helped him overcome that discomfort. “I’m determined to try my best and that’s for sure, you have to change your circle of friends.”

Mugshot has given barista experience to eight people in the past year. “One of the main ways of breaking the cycle of ending criminality and unstructured lives is employment,” says Clune. “It is well documented. Give somebody a job, and the chances of them reoffending dramatically reduces.”

No one is under any illusion; this is an uphill struggle. A survey among former prisoners conducted by the Irish Penal Reform Trust in January showed that 81 per cent of offenders say their conviction had an ongoing negative impact on getting a job, even for a minor offence that occurred some time previously.

The concept of offering regular work as a means of helping prisoners is more advanced in the UK, primarily through the pioneering work of one company.

That is Timpson, which has dry-cleaning shops and photo stores as well as locksmiths, shoe-mending and key-cutting outlets.

In all, more than 1,200 ex-offenders work for the group. Many start training for Timpson while still serving their sentences, in special academies located in five prisons across Britain.

Its chief executive, James Timpson, has been the driving force behind the idea, having been impressed by a 19-year-old offender who had come to him on work experience well over a decade ago.

He found that many prisoners craved an opportunity for stable and regular work. Hence, there has been a very high rate of retention and job satisfaction at his company.

Helping ex-prisoners is perhaps at the cutting edge of social enterprise. There are many other kinds.

Six kilometres up the road from the Four Courts, Speedpak in Coolock has been providing training and jobs for long-term unemployed people for more than a generation.

“Speedpak was established 24 years ago when social enterprise had not even become a term,” says company chairman Jim Lillis. “There was a lot of unemployment on the north side of Dublin. Those who were out of work were in a Catch 22 situation. It was very hard to get jobs without experience and very hard to get experience without jobs.”

So a group came together to set up two companies to provide training and real work experience. Several avenues were explored before Speedpak nestled on two businesses. One has become a specialist contract packaging company.

The second company is Shamrock Rosettes, which makes rosettes for animal shows in Ireland and abroad, from the RDS Horse show, the Tullamore Show to dog shows.

Michelle Stone from Artane is the supervisor on the floor. She came in 20 years ago on a temporary basis when millennium candles were being made. And has stayed ever since.

“It’s great. We get all types of different people. Some come in with no confidence and go out with their self-esteem is up here (she gestures her palm to the sky).”

Speedpak’s two companies has put 1,150 people on a track from unemployment to work, with training and work experience. Some 60 per cent of the intake of one of its most recent courses found employment soon after it came to an end.

Minister for Rural Affairs Michael Ring has championed the concept. For him, companies like Speedpak and Mugshot fill a vital social need.

Now Ring is formulating a national social enterprise policy. He says he wants to map this sector, measure how extensive it is, and then formulate policies that will help it grow.

Speaking at Speedpak at the launch of the policy this month, Ring said: “Look at this company. They create jobs and plenty of them. Whatever profits they make they put it into the enterprise or into other social good.

“They give people an opportunity ... bring them into society again, get them reestablished, get them working.”

And at the launch, Mugshot provided the coffee (which was excellent). It was a reminder that you sometimes have to look beyond the mugshot to discover that these are real people who want to make a real contribution to society.

The name of the former prisoner has been changed

Irish woman in San Francisco: Life is quiet but everyone is exercising
Real news has value SUBSCRIBE