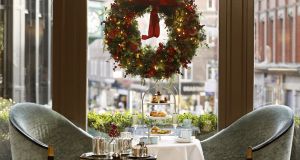 Afternoon tea – an overpriced sugar fest, or a chance to relax in comfortable surroundings and catch up with friends and family over a cup of tea and something delicious?

It seems that the latter is the case across Ireland, where we can’t get enough of cake stands and bone china. When the recently reopened Adare Manor hotel announced that it was taking reservations for its €45 afternoon tea, 700 bookings were made in days.

Festive editions have been announced by the Westbury and the Westin hotels in Dublin. The Westbury has added a selection of winter teas, such as Winter Surprise, which blends black tea with cinnamon and marzipan flavours, to its menu. Many of the sweet and savoury treats here are inspired by Christmas flavours such as cranberry, mulled wine, turkey and ham, and smoked salmon. The festive afternoon tea at the Westbury costs €50 and is available until January 6th.

At the Westin, afternoon tea is being served in the Perrier Jouët Christmas lounge, where an “Enchanted Tree” installation, its branches holding glasses of Champagne, is in place in the atrium. Only two of these were commissioned, and the other had its most recent unveiling in Japan.

The Westin’s festive afternoon tea costs €58, including Champagne, and is served noon to 6pm every day until January 5th. After 6pm, the lounge will be serving a Champagne and canapes menu, a sharing plate type menu of substantial snacks that could be a good option when restaurant tables are hard to come by.

At the Ferrycarrig Hotel in Wexford, the kitchen has gone for a locally-inspired menu for its festive afternoon tea. Meyler’s oak-smoked salmon and Killowen Farm cream cheese is served on the hotel’s own Guinness bread. Rosslare crabmeat and local spiced beef also feature, along with Kingfisher teas from Wexford.

Killashee Hotel, near Naas, Co Kildare, is also offering a Christmas afternoon tea, for the month of December (excluding 24th-27th). “When choosing menu ideas for afternoon tea for Christmas, I’m inspired by what’s in season and especially by what reminds me of Christmas when I was a child,” says executive head chef Phillip Gleeson. “My memories of smells and tastes include Baileys, mint, mince pies, cinnamon and warm spices.”

Does what it says on the tin

Kevin Dundon’s recipe for the traditional fruit cake in SuperValu’s Signature Tastes range comes from his grandmother and is a fourth generation family favourite. The 1kg cake (€14), made with free range eggs and Irish butter, is sold with its own tin.

Budding food entrepreneurs in secondary schools around Ireland are invited to compete for the GROW 2 CEO 2018 title, which will involve growing their own vegetables, creating a soup recipe using their crop, and devising a business plan to sell it.

The three teams with the best recipes and business plans – and the veg to fulfil the brief – will be invited to a Dragon’s Den-type final at GUY HQ in Waterford next May. Teams of two students can register to take part at cullyandsully.com/ourgarden and will receive grow kits containing all they need to start growing vegetables.

The winners will receive a €3,000 food garden for their school, plus iPads for themselves, hoodies for their class, and an overnight stay at Ballymaloe for their teacher.

The competition is sponsored by Cully & Sully, which recently released a new range of pies and broths to serve two people. There’s a fish pie and a chicken pie, both topped with potato (€8.99), 12-hour beef broth and vegan Japanese-style miso broth (€4.49). The new range is made in Cork, and on sale nationwide in Tesco and Dunnes.