Is MSG really all that bad?

Now we know: Answering the foodie questions you didn’t even know you had 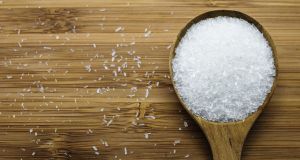 If the Japanese invented MSG and use it in their cooking, why do Chinese restaurants get all the blame for it? Photograph: iStock

For those of us with a savoury tooth, umami (or xian as it’s known in Chinese) is where it’s at. We can’t get enough of the earthy yumminess of mushrooms, seaweed broths and tomatoes. Such is the grá for the naturally occurring amino acid known as glutamic acid that the Japanese biochemist Kikunae Ikeda isolated monosodium glutamate (MSG) in the early 1900s.

To find out more about MSG, I get in touch with Oonagh Monahan, a food business consultant at Alpha Omega Consultants, a Fellow of the Institute of Food Science and Technology, and author of Money for Jam.

“On cooking, fermentation or ripening, glutamic acid is converted to glutamate and this gives food its special flavour known as umami,” Monahan explains. “Glutamate, when added to sodium, becomes MSG.”

Mei Chin is an American-Chinese food writer living in Dublin. If the Japanese invented MSG and use it in their cooking, why do Chinese restaurants get all the blame for it? Chin points to the notion that Japanese cuisine is perceived as “classier” than Chinese food. “MSG, as it is known,” she says, “ is a trashy Chinese problem.” She concedes that the Chinese may lack restraint in their use of MSG, using it as a seasoning rather than a flavour enhancer, which perhaps explains the strong association. But the negative connotation of a so-called “Chinese Restaurant Syndrome” proliferated in the late 1960s has lingered around like a bad taste.

“A small number of people report a sensitivity to MSG,” says Monahan. “However, a double-blind controlled challenge of individuals claiming to suffer from ‘Chinese Restaurant Syndrome’ failed to confirm MSG as the causative agent. MSG is one of the most extensively studied food ingredients in our food supply. Hundreds of studies and numerous scientific evaluations have concluded that monosodium glutamate provides a safe and useful taste enhancer for foods.

“Too much of anything is probably bad for you,” concludes Chin. “MSG is a concentrated product, so if a Chinese restaurant puts a heaped tablespoon of MSG in your food, you will probably react in the same way you would if you’d ingested a few kilos of kelp or mushrooms with a hefty dose of salt to boot. You won’t feel great.”