The baker, the rockstar and the quest for the perfect bread 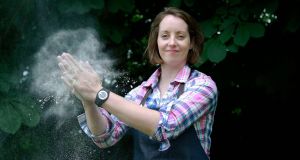 Louise Bannon ‘It’s lighter to eat and you can digest it easier so it helps more people not to be sick.’ Photograph Nick Bradshaw

Great food gives back a memory of something you forgot you knew. Chef Louise Bannon is sawing open a loaf of sourdough bread and there it is, curling like steam out of the warm loaf. I’m walking through golden fields with my friend. We’re bringing a flask to her Dad on his combine harvester, a toasty smell of wheat, dust, straw and sunshine.

Even without the time machine trip, this is the best bread I’ve ever tasted. It’s the hard won result of a partnership between a farmer and a chef determined to claw back flavours almost lost. Lots of chefs visit farms. But Bannon went and helped set up a bakery on one, taking sourdough up another level. Does sourdough need to get any more up itself? Bear with me.

It’s early morning on La Ferme a Naroques, deep in the Gascony countryside near the town of Auch, about 90 minutes drive from Toulouse. Bannon has just taken more than 100 loaves out of the oven, with a long wooden paddle. Their crusts are crackling as they cool and the smell is ridiculously delicious, billows of nutty warmth wafting out into the farmyard.

The shed has been plastered and the floor tiled in a simple transformation from outhouse to bakery. Black and white photographs of horses pulling farm machinery line the walls. But these are not long-dead animals. They’re very much alive in the field next door snorting gently through velvet nostrils to see if we have any bread for them.

The horses are a clue to this extraordinary farm. Bannon arrived here in freezing temperatures around the middle of January. “I was in London, thinking about opening a bakery there and I was looking for wheats, and I met Andy.” She’s talking about the farmer Andy Cato who, in a previous life, was one half of the 1990s band Groove Armada. “I See You Baby (Shakin’ That Ass)” is probably the duo’s best remembered song, thanks to its use in the Renault Megane campaign of the early 2000s.

Cato is a willowy six foot eight, with a crop of wheat coloured hair, appropriate for a farmer who grows outlandishly tall wheat. A field of nearly-ripe rye is pushing on to six foot in height. Almost a decade ago ( he'd never planted a seed in his life) Cato read an article about industrial farming and the danger of topsoil depletion in 50 to 70 year’s time. It was a lightbulb moment, he says, when he felt “there’s kind of nothing else that seems worth doing other than that ... So I decided to sell my publishing rights and borrow from the bank to buy a farm.”

Cato sourced the wheat from the bottom of the grain silo of a French baker who had spurned the dwarf varieties that swept through bread making in the 1950s and continued to bake with older varieties. The grains had been lying there for 30 years. “There was literally a handful, well, half a bucketful.” So he planted them in a six-foot square patch and with each harvest grew the seed bank, along with another Danish grain, into a 20-hectare farm, planting and harvesting the wheat using horses to protect the soil.

As a chef and baker Bannon was intrigued. “I wanted to see how they are grown so I made the journey out here.” From there came the idea of trying to bake bread on the farm, where Cato and his family live. “We just had like a small mixing bowl and this oven and we just tried the wheats everyday.” It took six weeks to get bread that Bannon was happy with. “I knew it was going to work. it was a challenge but I knew we could just make it happen, getting the fermentation right, getting the water content, the starter right. it just took a while.”

The prize was delivering the taste of the farm, not the breadmaker’s craft.

Bannon’s obsession with flavour comes from more than a decade of working in world class kitchens. She went into Kevin Thornton’s kitchen in 2004 after her culinary arts degree. After a year she went on a work placement to The Fat Duck and then joined the kitchen at Tom Aikens. After six months she returned to Dublin to join Dylan McGrath as one of his team at Mint. They were intense kitchens, with few women and lots of shouting. When Mint closed there was nowhere else in Dublin she wanted to work so she applied to twenty of the world’s fifty best restaurants. Rene Redzepi was the first to get back to her and she joined the team at Noma in 2009. She has been one of the longest-serving Irish members of the Noma kitchen, doing two separate stints.

As this morning’s bread is packed into a small car for delivery to locals and restaurants Bannon feeds the starter with more flour, and starts a new batch of dough. After three folds every half an hour it will be shaped, kept consistently at 26 degrees and put into proving baskets for 16 hours before being baked. The loaf orders, precise methods and timings are chalked on a large blackboard and the batch quantities worked out in detail on an app on her flour-covered laptop.

Bannon plans to open her own bakery, probably in London, by the end of the year. She wants to have a grain silo and a mill on site to replicate the up close and personal relationship with the raw ingredients that she gets now from baking on a farm.

Her skill enabled Andy Cato to turn his farming idea into food. But it took fiendish commitment. It was both exciting and alarming, Cato says, “to realise that people were either incapable of making bread from it because they were trying to use their normal systems ... or the people who were making bread from it were compensating for the fragility of the wheat compared to modern wheat by putting very little water in there.

“So then [I realised] the only way out of this is to go the whole way and make the bread ourselves. It was another load of investment and money to be found. So when we were working on the recipe partly it was exciting but obviously there were many times when it didn’t work and it was like: ‘shit this has to work.’ But it did.”

It’s been a fascinating experiment in making bread better. The lower gluten in the Naroques grains made the baking a challenge but Bannon believes the bread is significantly healthier.

“It’s lighter to eat and you can digest it easier so it helps more people not to be sick,” she says.

“Even people who have mild gluten allergies are fine with this ... that’s why it’s good to use these grains. It’s not just like ‘oh yeah we have to use these grains let’s challenge ourselves.’ It’s not to prove myself it’s to help people not to be sick.”

Rosita Boland: I stood under a tree in case Goldilocks showed up