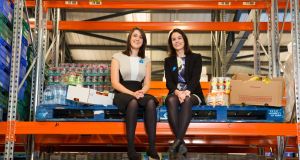 Aoibheann O’Brien still remembers that first box of food five years ago. She and Iseult Ward picked it up at the Honest 2 Goodness Farmers Market in Glasnevin in Dublin and dropped it off to the Don Bosco youth services centre. It was a sunny June bank holiday weekend. “We thought, ‘we feel great about this’. It was artisan sausages and really nice sourdough bread and I think there was raw milk as well, which is so funny, because everyone goes mad for raw milk.”

The delivery was a dummy run for FoodCloud, a college project set up by the two women. It became a tech startup connecting businesses that had surplus food with charities who needed food. Five years on and 8,300 tonnes of food or more than 18 million meals have been diverted from landfill, and FoodCloud employs 30 people tackling food waste from almost 2,000 businesses here and in the UK.

At their new headquarters in Tallaght’s Broomhill Business Park, the visitor book sits on a stand made from a timber pallet, in a nod to the idea of usefulness over waste. The bright offices were painted by prisoners on day release from an open prison. A tech team is working on the ground floor while upstairs a call centre team is fielding calls from supermarkets in the UK, where more than 1,600 branches of Tesco and three Waitrose stores are posting donations of food. Waitrose is trialling it with a view to expanding it to more branches.

Until late last year FoodCloud transactions involved small consignments of food collected by individual charities from the delivery bays of supermarkets and shops. Now in the 15,000sq ft warehouse the scale of their new operation, FoodCloud Hubs, is visible.

“There’s a lot wasted at retail level but there are huge volumes that go to waste before they even get to a supermarket and they’re in big bulk,” O’Brien explains. So this warehouse, and two others in Cork and Galway, takes pallets of food from 100 Irish businesses including supermarket distribution centres and food producers, and deliver it to charities around the country.

Among the vast haul are two pallets of Nutrigrain bars, which would have ended up in landfill or in an anaerobic digester because their best-before date is looming. Earlier in the season they had a consignment of pullet eggs, deemed too small for retail, from a West Cork egg producer. In a cold store whole ducks and turkeys from Aldi’s Easter range are stored frozen to extend their life. Glanbia, Kerry Group and Pallas Foods are assessing FoodCloud Hubs as a potential food waste solution for their businesses. It’s a long way from that first box of bread, milk and sausages.

O’Brien first got excited about food and sustainability when she was living in London on a graduate scheme with investment bank, JP Morgan. A law and accounting graduate she returned to Dublin to do a masters degree and decided to volunteer with a food waste project in Dublin. The nearest thing was a redistribution hub run by the charity, Crosscare.

She went to pitch the idea of a surplus food cafe at a social enterprise event and met Trinity business student Iseult Ward, who loved the idea. The two women decided to start FoodCloud as a college project.

“We spotted a gap in the market for this supermarket-level surplus,” O’Brien says. “That’s where we thought it was really interesting because in the same communities there was surplus and scarcity. We thought, wouldn’t it be amazing if you could bring it all together. You had all these multiples [throwing out food] and then you’d walk down the street and there’d be a sign for raising money for St Vincent de Paul.”

They quickly learned that in the complexity of the modern food system there were barriers to that simple idea of connecting surplus to scarcity.

“In the US there was a guy doing it in Chicago so we spoke to him, but when we talked to a more established hub model they said, ‘oh retail is very difficult because it’s small volumes, end of life. It’s more hassle than it’s worth in terms of the food. And it’s just really tricky to do it’.” But they were undaunted.

Instead each barrier became a problem to be worked out. With solicitors A&L Goodbody they drew up legal contracts so charities agreed to be responsible for the safe delivery of the food once they received it in good condition. The not-for-profit ethos of sharing meant they could tap into other resources. “The guy in Chicago was like ‘here, use my app’. The guys in London were giving us their contracts.”

In October 2013 they got their big break when Tesco Ireland came on board. “Until then it would have plodded along with a couple of cafes and bakeries.” They quickly went from one to 13 stores and by the following summer they had a national roll-out with Tesco, and they hired their first staff. Now 274 Irish food retailers connect with 303 charities through FoodCloud.

There are still plenty of challenges as FoodCloud grows, not least keeping the operation financially sustainable and getting food out quickly so it doesn’t go to waste in their warehouses. They are, O’Brien says, just one strand in a massively complex problem. But the feedback has been encouraging.

One Dublin charity has saved up to €9,000 on its annual food budget by incorporating waste food ingredients into its menu. The chief executive of a women’s shelter told O’Brien that the FoodCloud initiative was one of the most powerful things it had done. “Because all of the women come out of their rooms to see what’s there, have a chat, have a laugh about what food is there, because it can be quite random. They get to engage with each other and talk about things. So they [the shelter] said it just shows the power of food. It’s not just food. It’s about bringing people together and sharing.”

Running a growing business is a huge leap from a college project but O’Brien and Ward are still excited about its potential to reach other sectors.

The new hub enables them to work with businesses at several levels “whether you’re an egg producer or a massive manufacturer or a store manager in inner city Dublin, that’s really exciting to us. It fits in with the Origin Green idea of sustainability. Food waste and food poverty have to be part of that sustainable food conversation but that’s where we see there’s huge potential for Ireland to be a leader in that.”

Ideally they would like to see food waste eliminated and the data they’ve gathered will help do that. In the meantime they try and ensure surplus food gets to people who need it.

“There’s a lot of energy and loads of people behind it. That’s what’s really amazing. You can start something but you need a lot of people throwing their weight behind it to keep it going. You see all of these diverse people getting behind it, from a Tesco senior leadership team to the charities that put up with the teething problems and stuck with it. People felt intuitively that this was a really good thing to do.”