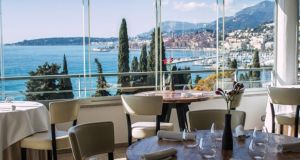 Mirazur, in Menton in the South of France, has been named the world’s best restaurant 2019. Photograph: World’s 50 Best

The prestigious World’s 50 Best Restaurants announced a surprise winner on Tuesday when  Mirazur, in Menton in the South of France, beat Noma 2.0, to the top spot at a ceremony in Singapore, the first time the awards have been presented in Asia.

Noma was widely expected to top the rankings on its re-entry to these awards, having opened at its new location in Copenhagen in February 2018, too late for consideration for last year’s list.

In a controversial change to the rules, previous incumbents of the top spot were precluded from the list this year, but Noma, which won four times previously in its original location, was considered a new entry.

Although not taking the top spot, René Redzepi’s newly-imagined restaurant achieved the highest ever new entry status in the 17-year history of these awards.

Mirazur, with chef Mauro Colagreco leading the kitchen, moved up from third place last year. Both El Cellar de Can Roca and Osteria Francescana, in second and first places respectively 12 months ago, were ineligible this time around, due to the rule change.

Mirazur is set over three levels on a hillside close to the Italian border in Menton. The menu has three themes, sea, garden and mountain, and the tasting menu is €260.

Third place in the rankings went to Asador Etxebarri in Spain, a considerable jump from its 10th place finish last year. Spanish restaurants filled three of the top 10 spots, with Mugaritz in seventh and Disfrutar in ninth.

Gaggan in Bangkok  took fourth place in the listing, with another Copenhagen restaurant, Geranium, finishing fifth. Geranium, which is  located in a football stadium, jumped from 19th position last year.

Restaurants in Lima, Peru featured strongly in the list, with Central retaining its sixth place position and being joined in 10th place by Maido, which dropped from seventh last year.

L'Arpege in Paris retained eighth position and its chef, Alain Passard took the Chefs' Choice award, voted for by his peers.

US-based Spanish chef José Andres was the first recipient of the Icon award, for his humanitarian work in proving meals in areas affected by natural disasters. Daniela Sotto-Innes, of Cosme and Atla in New York, was on hand to accept the best female chef award, but Jessica Préalpato, head pastry chef at Alain Ducasse at the Plaza Athénée in Paris, was unable to travel to Singapore to collect her best pastry chef in the world title as she is in the latter stages of pregnancy.

This has been a year of change for the World’s 50 Best, which in January announced that all previous incumbents of the number one position would be precluded from the list and would instead join a newly created category, The Best of the Best.

This rules out seven restaurants, which have passed the title between themselves in the list’s 17-year history. But in effect that number is actually five, as elBulli is no longer open, and Noma, in its new location and new incarnation, is considered a new entrant.

The Best of the Best is made up of elBulli, formerly located in Spain; Noma, in its original iteration in Copenhagen; The French Laundry in California, The Fat Duck in the UK; El Celler de Can Roca in Spain; Eleven Madison Park in New York; and last year’s number one, Osteria Francescana in Italy.

The changes, which also included moves to ensure gender equality between the 1,040-strong voting panel drawn from across the globe, were said to have been prompted by a desire to achieve “a more diverse and inclusive list in the long-term”, said William Drew, Group Editor of 50 Best.

However Lisa Abend, writing in TIME this week, suggested that lobbying by influential chefs, including previous occupants of the number one slot, prompted the change. Removing previous winners from consideration ensures that they are spared the possibility of dropping down the rankings.

The 50 Best list has also had shade thrown on it by the new World Restaurant Awards, which had its inaugural event in Paris in February and is being positioned as a more inclusive and relevant selection of dining rooms. Joe Warwick, one of the original creators of the World’s 50 Best, is co-founder of the new awards with Andrea Petrini.