Spuds and us: Why is Ireland turning away from the potato? 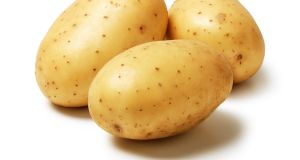 Combined with butter and sea salt, potatoes must be close to the most beautiful food I can imagine

As I stare at the very beautiful new season potatoes, I wonder is it time for us to leave the myth of Ireland and the potato behind? I mean, everyone loves potatoes, no? Simmered in salted water and then dressed with butter, sea salt and parsley (though I prefer dillisk) – can you imagine a more wholesome meal?

At the height of our infatuation with the humble tuber, just before the famine, some of us ate an average of 7kg of potatoes a day. And now?

Ironically, potatoes are still the best selling dish in our tapas bar. I would go so far as to say they keep the whole restaurant going. Cubed and deep fried (you can roast them in an oven as well, with a little oil), they are then dressed with Spanish smoked paprika, sea salt and served with our bravas sauce, a mixture of mayonnaise, tomato sauce, px sherry vinegar, and more smoked paprika. The original sauce is made with hot paprika, hence the name bravas which translates as brave.

Over in Tartare we take a more contemporary take on potatoes, folding a sea herb butter into steaming new season potatoes. I understand why people get emotional about potatoes. Combined with butter and sea salt, they must be close to the most beautiful food I can imagine.

Seaweed and potatoes are as old as Ireland, or at least as old as we consider ourselves Irish, which it only a couple of hundred years. Dillisk and potatoes, potatoes cooked in sugar kelp, roast potatoes with nori ... I could go on. Perhaps we are growing tired of the generic spud. But let’s not forget our artisan potato farmers, Ballymakenny Farm being at the forefront of the revolution.

Put a spring in your step for running in February
3

Recycling, reusing and reimagining waste into new clothing and accessories
5

Meet gentle George the chicken dog and his hentourage
6

Readers on sibling bullying: My tormentor was there every day . . . waiting
7