Spilling the beans: a history of food idioms

‘Theories abound on the connection between being bananas and being nuts’ 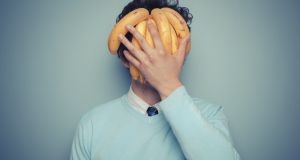 Even if you’re not into food in a gourmand way, ingredients have no doubt worked their way into your vocabulary. Food is intertwined in the way we speak, thanks to hundreds of idioms that use food and ingredients as a descriptive device. From “bad egg” to a “piece of cake”, these terms have moved away from the purely culinary and taken on new meanings.

The etymology of many idioms are hard to place, but they must have come from somewhere. Theories abound on the connection between being bananas and being nuts.

But, wait, what’s so crazy about nuts? A Slate article from 2006 asks the same question, and one of the theories author Daniel Engber puts on the plate is that in the late 19th century, “nuts” was slang for liking something, but so did being “crazy on something”. Engber proposes that it was American slang in the early 20th century that first used nuts as a synonym for crazy.

The saying “in a nutshell” means to keep a story short and sweet by summarising the basics of a tale. There’s a theory about the origin of this expression that involves the ancient Roman writer Pliny the Elder. In his AD 77 tome, Natural History, Pliny wrote: “Cicero hath recorded, that the poem of Homer called the Iliad, written on parchment, was enclosed within a nutshell.”

Now, The Iliad is a lengthy book, so how could even the tiniest of its publications fit into a nutshell? According to a Cabinet Magazine article called “A Minor History of Miniature Writing”, one Pierre-Daniel Huet, who later became the Bishop of Avranches, backed up Pliny’s story by writing a tiny copy of The Iliad and fitting it into a nutshell. Phew! I’m glad we got that sorted.

Some use the line, “I could be bounded in a nutshell, and count myself a King of infinite space”, from Shakespeare’s Hamlet as a source of the expression. But it doesn’t appear to have the same meaning of succinctness in this case.

According to phrases. org.uk, it wasn’t until the 19th century that “a nutshell” took on the clear meaning that it has today. It highlights William Makepeace Thackeray’s The Second Funeral of Napoleon (1841) as an example, with the line: “Here, then, in a nutshell, you have the whole matter.”

Bananas are not the only fruit to be used metaphorically. Apples have fallen far from their lexicological trees, from upsetting an apple cart to being the apple of someone’s eye.

Even one of the western world’s most glittering cities associated itself with this fruit, though this is more of a nickname than an idiom, of course. According to Mental Floss, New York City moniker the Big Apple was used by sports writer John J Fitzgerald in his 1920s horse-racing column.

In a column dating from February 18th 1924, Fitzgerald tells the story of how he first heard two stable-hands referring to New York as the Big Apple. He borrowed the phrase from its colloquial use to give name to his horse-racing column, and it caught on from there. In the 1970s, an official New York City marketing campaign officially aligned the city with the fruit, and the connection remains strong today.

An expression of value that is thought to go back a long way is to be “worth your salt”. Sodium chloride is essential for keeping us humans alive, so it’s no wonder we associate it with value. It’s said that our word “salary” comes from the Latin salarium, which is close to the Latin word for salt, sal. Some theories suggest that Roman soldiers were literally paid with salt; other sources suggest that a salarium was given to soldiers to help them buy their own salt stores.

These types of theories are not quite my cup of tea; I tend to take stories circulated online with a pinch of salt, as some are really only half-baked. Even so, they offer us some food for thought.

I feel rotten to the core for that last paragraph. But, sure, listen, I have to bring home the bacon somehow, don’t I?