Select: From literature to design – with all you can eat in between 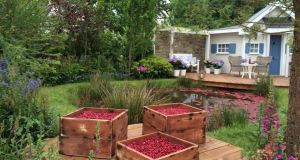 The Ocean Spray cranberry garden at last year’s Bloom in the Park festival. This year’s fetival will have a large Food Village with restaurants, cafes, markets and cookery demonstrations. Photograph: Lorna Gannon/Jardin

Food festival season continues apace – with more and more blending culinary elements into other areas of interest. The Kerrygold Ballymaloe Literary Festival, which celebrates food and wine writing, kicks off next weekend (May 15th to 17th) in Ballymaloe House, Co Cork. In two short years, it has become one of Ireland’s premiere food festivals, with more than 50 events over the weekend. See Marie- Claire Digby and John Wilson’s guide to this year’s events in this weekend’s Saturday Magazine.

Meanwhile in the National Craft Gallery in Kilkenny, Appetite for Design launches today. Running until the end of May, a series of exhibitions, events and performances will bring together designers, chefs and restaurateurs to look at the design of our food, the tools we use to prepare it, how we experience it and the places we consume it. Curated by Designgoat – who have designed furniture, interiors and tableware for Brother Hubbard, 3FE, Sister Sadie, The Woollen Mills and Chapter One – there will also be a number of talks, family events such as a Mad Hatter’s Tea Party, and eating experiences. These include four BYOB pop-up restaurants, with Barry Fitzgerald (former head chef of Etto in Dublin and Michelin- starred Harwood Arms in London) kicking off proceedings tomorrow (Saturday 9th). His five-course menu will include scallop with sea trout tartare, oyster and celery, and a smoked neck and loin of lamb with baked celeriac and nettles. Tickets are €60. There will also be nights hosted by Domestic Godless, The Culinary Counter and Cúán Greene and Harry Colley of Dublin Pop-Up. See nationalcraftgallery.ie.

Next weekend, it’s time to slow down and smell the coffee (and the cheese, and the chocolate) at the Burren Slow Food Festival, with a slow food week running from May 16th to 22nd, leading to the main festival on May 23rd and 24th.

The theme this year is Land and Sea, with the focus on locally sourced food and local traditions, with the action centred around the Burren and Cliffs of Moher. There will be lots of demos and chances to visit local producers, such as Siobhan Ní Ghairbhith of St Tola Goat’s Cheese in Inagh and Stephen & Eva Hegarty of Burren Free Range Pork Farm in Kilfenora. There are workshops on sourdough and fermented foods, and bean-to-bar chocolate. Chefs Ross Lewis of Chapter One, Derry Clarke of L’Ecrivain and JP McMahon of Galway’s Michelin-starred Aniar restaurant will give talks and cooking demonstrations on topics such as seafood and butchery.

One of the festival highlights is on Saturday 23rd, when the Burren Slow Food Banquet will serve up a traditional feast, to include Gleninagh Burren lamb on a spit and Burren Hot & Cold Smoked Irish Organic Salmon at the Burren Emporium in Lisdoonvarna (tickets €50). See slowfoodclare.com/festival for details and booking

Wexford Food and Wine Festival returns to the southeast from May 21st to 24th, where they will be praying for the weather gods to shine on the large open-air market on Saturday and Sunday, 23rd and 24th in Selskar St and South Main St, with a food trail joining the 10-minute walk between the two locations. Producers from the region include the delicious Wild About preserves and chutneys, Thai dishes from Wexford-based Thai Gold, Butler’s Italian-style ice cream, and a chance to gorge on Wexford strawberries .

Also on Saturday you can watch the live Leinster final of The Taste of Success – the RTÉ TV show where Irish producers compete to have their product stocked in Lidl supermarkets around the country. Chef Paul Flynn will join host Daithi O’Se in Redmond Square to judge the food, beginning at noon – it’s free to attend. Other events include a wine tasting tour of the Rhone Valley and dinner at Kelly’s Resort Hotel in Rosslare on Thursday 21st, and a guided foraging walk at noon on Saturday and Sunday 23rd/24th by Blackstairs Eco Trails in Curracloe.

The festival will come to a close on Sunday 24th when a dozen Irish craft breweries take part in the South Main Ale Trail. From 2pm, Simon Lambert & Sons and The Sky and the Ground in Wexford town will host the brewers who will do tastings and talks on their beers. See wexfordfoodfesteival.ie

Finally, Bloom in the Park – Ireland’s largest garden festival – comes to the Phoenix Park from May 28th to June 1st. For five days top garden designers will showcase 24 gardens with lots of advice for your own patch at home. If all that greenery makes you hungry, there’s a large Food Village, with cookery demonstrations from chefs such as Catherine Fulvio, Neven Maguire and Simon Lamont (the Lazy Chef). There’s lots of food to eat on site, including a cafe, outdoor stalls, a bistro-style restaurant where a two-course meal will cost €26.95 and a seafood bar with Irish seafood platters for €24.95. There are three markets to buy artisan food, Irish meat and fish, and fruit and vegetables in season. Kids will love the Bloom Farmyard, where you can see (And feed) lots of farm animals. Day tickets €18. bloominthepark.com.

Like all good festivals, there’s a fringe event happening – Bloom Fringe – in the city centre, where urban spaces will be taken over for the weekend and made beautiful with gardens, plants and installations. There will be some quirky food events too, such as “Tweet to Eat”, where Dublin Pop-Up (busy guys that they are) will be serving free seasonal snacks with foraged ingredients to people who tweet @BloomFringe. See bloomfringe.com  - Rachel Collins

Polyamory: The women in love with more than one person
8

Coronavirus and carers: ‘I am so scared right now’
9