Select: Behind the scenes at the Irish Barista Championships

The World Barista Championships will take place in the RDS as part of the SCAE and World of Coffee event on June 23rd-25th, in Dublin for the first time ever 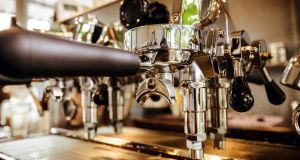 In a large conference hall, a barista stands at a demo table with a headset microphone performing a rehearsed routine around a variety of coffee drinks and tasks.

He’s surrounded by a group of judges, who are scribbling on clipboards while volunteers with stopwatches keep a hawk-eye on proceedings. Amidst this drama, he looks cool as a cucumber.

This is the Avonmore Irish Barista Championships finals, which took place earlier this week at the Food & Bev Live event in Citywest, Dublin. The composed barista in question, Wojciech Tysler, works at Bewley’s and is a veteran of these Championships.

I spot him being interviewed immediately after his polished routine and I’m surprised to see that he’s a bit shell-shocked after the pressure.

Immediately afterwards, I bump into Brian Birdy of Full Circle Roasters, who tells me of his own experience taking place in the Championships a few years back. “I absolutely bombed!” he says. “It’s so much harder than it looks.”

Alan Andrews, CEO of Coffee Culture and the National Coordinator of The Specialty Coffee Association of Europe Irish chapter (scae.ie), explains the judging process to me. “There are eight judges altogether; four sensory judges, two technical judges, one head judge and one shadow judge.”

Among the judges, I spot Mark Ashbridge who, alongside his partner Bridgeen Barbour, runs Established Coffee in Belfast. “We’re looking for how the barista represents and communicates the coffee, and how that compares to how their drinks actually taste,” says Ashbridge, after the winners are announced.

The head judge is a WCE- certified judge Roukiate Delrue from Guatemala. Andrews explains, it’s her presence that gives these championships the accreditation necessary to be recognised on the world stage. Food & Bev Live also played host to the Irish heat of the World Brewer’s Cup (worldbrewerscup.org), designed to seek out the best in filter-coffee brewing using devices such as V60, Aeropress and French press.

Tysler was one of six finalists competing in the Irish Barista Championships, and eventually placed in third. In second place was Proper Order Coffee Company’s Niall Wynn, while in first place for the second year in a row is Natalia Piotrowska.

For the coffee crews in Ireland, having the World Barista Championships here this year is a seriously big deal. Tom Stafford of Vice Coffee Inc. on Middle Abbey Street in Dublin puts it into perspective for me.

“Everyone is stoked to be hosting the competition in June. It will see over 10,000 coffee delegates descend upon Dublin for the week.”

And how will our flat whites, Aeropress brews and latte art compare with the standards our esteemed visitors uphold?

“The coffee scene in Dublin rivals any other city in the world,” says Stafford.

Andrews of SCAE Irish Chapter agrees, having seen a great change in the last 15 years of being involved in coffee. “Not only are the baristas more knowledgeable, but the customers are more experienced and discerning.”

Find out about June’s World of Coffee event online at worldofcoffee-dublin.com.

My daughter is excluded from the friendship groups in school
4

Ask the Expert: My partner’s smoking again and I hate it
Real news has value SUBSCRIBE